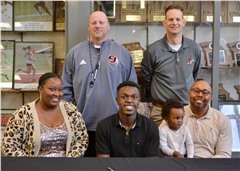 For Markiese Jones, football has been a part of his life ever since he was five years old when his cousin Craig Beasley first taught him how to play the game.

Beasley is also the person who taught and told Jones that, “Tough times do not last, but tough people do.” This is a phrase Jones still carries to this day.

It was not until Jones’ freshman year while attending Cape Central that he dreamed about one day playing college football and signing with a school on National Signing Day. As a senior at Jackson last week on Feb. 5, Jones fulfilled that dream.

Jones, who was a SEMO All-Conference and Class 5 District 1 All-District selection at cornerback this past season for the Indians, inked the dotted line with McKendree University to continue his career on the gridiron.

“Seeing [other players] sign that paper and moving on to the life,” Jones said. “I’m just blessed God has blessed me to be able to put me in the position that I am.”

Jones made the decision to sign with McKendree after the quick bond he formed with the team’s defensive coordinator Atiba Bradley. Jones also raved about the facilities at McKendree and feels like he, “Can do special things there.”

It has been an interesting road for Jones, who transferred to Jackson from Cape following his freshman year and became a starter in the Indians secondary during his final two campaigns.

During his sophomore season, Jones attended a football camp during the summer at the University of Alabama, where he even had the chance to meet current head coach Nick Saban. Jones said the camp opened his eyes to how much room he had to grow in order to one day play college football.

The Indians only fell to Carthage by three points at 24-21 for the state championship game.

“I don’t really know how to put [playing in a state title game] into words,” Jones said. “It was just amazing how the community and school [sent us off to state and how many attended the game]. This town really does love football, and it really is a big family. I’m grateful that I was here to be a part of that.”

Jones converted to playing cornerback from safety in Jackson’s zone coverage scheme, and he credits his ability as a ball-hawking corner to an unusual but surprisingly effective mindset.

“When the ball is in the air, I kind of think of it as like my favorite food,” Jones said. “I want that, so I’m going to go up there and get it. The ball is everything — if you don’t have the ball, you didn’t win the matchup.”

Jones also said he has developed a “dog” mentality because corners are usually defending a wide receiver one-on-one, so it is up to him to make a play on the ball if the quarterback throws it to the receiver Jones is covering.

Jackson head coach Brent Eckley first described Jones as a “really, really great addition and contributor to our program.” Coach Eckley continued to say Jones is a player who has soaked up everything he and the staff have taught him.

“It has been a desire of his to find a place [to play college football], and it’s not an easy process as kids start going through it trying to find the right spot for the next four or five years,” Coach Eckley said. “Knowing they’re able to use this sport to help pay for their school to be able to better themselves — it’s a big deal, and we’re really happy for him.”

Coach Eckley, who is a former college football player himself, thinks Jones will fit in well at McKendree. Eckley also believes Jones has a high ceiling and will continue to improve his speed and strength as he matures.

One of the things Eckley noticed Jones improve on during his time at Jackson was his physicality. Jones did so by spending his time wisely in the weight room and also by growing confidence in his own game each Friday night.

Even though Jones primarily played zone coverage at Jackson, Eckley said he sees Jones playing more man-to-man in college since he is more than capable of doing so.

The Indians have started offseason workouts in preparation for the 2020 season, and Coach Eckley said he and his staff are already missing Jones.

“He’s a kid who was there every day with a smile on his face,” Eckley said. “He’s got an infectious personality, and I told all the coaches that recruited him that they’d love him just like we do. He’s a joy to have around. He loves practice, he loves football and he loves to compete.”

Before Jones moved to Jackson, he never imagined he would play for a state championship or be in the position he is right now to play college football. Jones recalled his first day of workouts under Coach Eckley when they were doing agility runs.

“I was dead tired and was like, ‘Is this conditioning?’” Jones said. “Dalton Skrob looks at me and is like, ‘No, man. This is just like warming up. We haven’t got to the real conditioning yet.’ I was just like, ‘Wow. This is going to be different.’ I’m just grateful to be here right now, and I just think this is a wonderful place for anybody to come.”

While Jones is off the field and in the classroom at McKendree, he will be majoring in business management. This is because Jones wants to be his own boss. “The person I am, I don’t really like working for other people.”