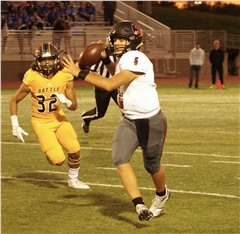 Entering Friday night’s game against No. 7 Battle on the road in Columbia, No. 10 Jackson football’s first-year starting quarterback sophomore Cael Welker admitted to being nervous since it was the biggest game of his career thus far.

However, this had no effect on his game as Welker finished with a career day by throwing for 516 yards, seven touchdowns and had no interceptions on 39 attempts.

“It was my first time playing in a top-10 game, and it felt really good to come in here [and accomplish that],” Welker said. “It was a little nerve wracking because I knew what they had, but we took care of business.”

Catching four of Welker’s seven touchdown throws was none other than senior wide receiver Jordan Kent, who also finished with a game-high 217 receiving yards on 14 catches.

Also amassing 200 receiving yards for Jackson was junior Seth Waters, who came up with 209 yards through the air on seven grabs and also had two receiving touchdowns. The last of Welker’s seven touchdowns went to sophomore wide receiver Rhet Liley.

“It makes it fun to call the offense when you have kids that execute like that, and it starts up front with the offensive line protecting,” Jackson Head Coach Brent Eckley said. “Our skilled guys executed and ran the right routes — they competed and just made plays.”

Battle’s defensive front lined up in a few schemes for different blitz packages, which is something Jackson knew the Spartans would do heading into the game.

Welker was forced to roll out on a few occasions, but for the most part the offensive line was able to keep the Spartans at bay.

“Our offensive line did a really, really good job tonight,” Welker said. “They probably brought six, seven [pass rushers] almost every play, and I only got hit like one time. I was really proud of [the line] tonight.”

Behind his line this year, Welker has completed 62.2 percent of his passes for 1,458 yards and 19 touchdowns while only throwing three interceptions on 148 attempts.

“Coming into this environment, it’s a big crowd and it’s a long trip — [Battle has] got a lot of pride and a lot of tradition,” Eckley said. “They aren’t very old but they’ve been state champions already. [This game] wasn’t too big for Cael. He didn’t have stars in his eyes — he was ready to compete and was very focused and sharp.”

Leading the rushing attack for the Indians was sophomore running back Daniel Dickerson, who carried the ball 15 times for 69 yards and two touchdowns, bringing his total to 10. Welker was behind him with six rushes for 20 yards.

The Spartans senior quarterback Jaren Lewis completed 12 of his 20 attempts with two touchdowns while only gaining 24 yards rushing on 15 carries.

Leading Battle in rushing was junior running back Darren Jordan, who gained 126 yards on 22 carries and scored one touchdown. Fellow running back sophomore DaleShawn Coleman scored two touchdowns on 10 attempts with 47 yards.

“Those are really good backs — they are physical kids and they run hard and are good athletes,” Coach Eckley said. “Watching them last week, Jordan was hurt so they just had Coleman. He’s super fast, but I thought we did a good job rallying to him.

“Jordan is a tough back to deal with as well. He ran hard, ran behind his blocks well and exploded up the field. Our guys just kept battling.”

Jackson sophomore inside linebacker Bryce Norman and sophomore outside linebacker Randol McDowell combined for 36 tackles. Norman led the way with 19 stops along with a game-high four tackles for a loss and one of the defense’s six sacks.

Norman set the tone early in the first quarter when Lewis broke off a run near the sideline, and that was when the Norman laid a blow that sent the quarterback down immediately. Norman was called for a personal foul after the hit.

“That stuff doesn’t effect me,” Norman said. “I just get back up and clear it out of my mind. I just try to fill in the shoes of Nathan Brown, who had a lot more tackles last season than I do right now.”

Brown is currently second on Jackson in tackles with 67 behind McDowell’s 76. Both linebackers also lead the Indians in tackles for a loss as McDowell has 13 while Norman paces him with 10.

Making one of the biggest plays of the game was the man in the middle beside Norman, junior Riley Pike. He recovered a fumble on Battle’s first play of its second drive, which led to the Indians taking a 12-7 lead four plays later.

Junior safety Caleb Craft also came up with his second interception of the season late in the fourth quarter to help secure the win.

Craft is currently the only Indian to have recorded an interception so far this season.

With this win, Jackson is certain to move up in the Class 5 rankings and possibly into the top five.

The Indians will be playing for this year’s SEMO Conference Championship against Farmington (4-1, 2-0) on Friday at The Pit, which Jackson defeated handedly 77-42 in 2017 on the road.