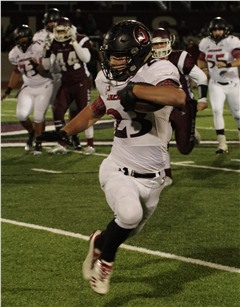 It took three overtimes to decide which team would advance to this year’s Class 5 District 1 Championship between Jackson football (8-2) and Poplar Bluff (9-1) on Friday, Oct. 27, at Mules Stadium.

This was fitting for Jackson since senior running back/linebacker Ethan Laster admitted he and his teammates felt like they owed Poplar Bluff a game after losing to the Mules by one point at 29-28 in the regular season.

In the first half the Indians only put 7 points on the board to the Mules 14, as the offense struggled against the different look Poplar Bluff gave them from what Jackson was expecting.

Being a part of all of Jackson’s six touchdowns in the first four quarters of play was senior quarterback Cooper Callis.

Callis finished with 305 passing yards and six touchdowns (one rushing) with no interceptions as he went 24-for-44.

Callis and Jackson’s offense resulted to an option attack out of the spread formation to open up passing plays, resulting in Callis carrying the ball 17 times for 43 yards.

“We worked on that a lot this week and the past week,” Callis said. “I’ve always been able to pitch the ball — we just haven’t really put it in the playbook. We just worked with what we had and what they gave us.”

Coach Eckley said he still did not feel comfortable in his play calling from how Poplar Bluff was defending, but his offense was able to put together drives in the second half to outscore the Mules 35-28 and force overtime.

Opening up the passing game for the Indians on the ground was Laster, who finished with 28 attempts for 205 yards and two touchdowns. Laster scored both of his touchdowns in overtime.

Even though Laster did not score a touchdown until overtime, he was a key part in helping his team answer one-play scoring drives by the Mules by running for big gains to get Jackson into Poplar Bluff territory.

“[Laster] runs so hard,” Callis said. “I couldn’t ask much more of him — he’s such a good player, and he runs to where it’s open.”

In the first overtime, neither team scored as Poplar Bluff forced Jackson to turn the ball over on downs, but the Indians then forced a fumble recovered by sophomore defensive lineman Cole Amelunke.

In overtime for high school football, each team is allowed a possession at the opponent’s 25-yard line.

All Poplar Bluff needed was a score of any kind to win after Jackson failed to in overtime No. 1, but the Indians defense led by senior linebackers Nathan Brown and Laster held up for them to win the turnover battle.

The Mules had possession to start the second overtime, leading to junior running back Isaiah Johnson scoring his fourth touchdown of the night on a two-yard run to take a 49-42 lead.

Laster, who starts both ways on offense and defense for the Indians, answered Johnson’s touchdown run, much like he did all night, with a 20-yard run of his own to tie the game and force the third and final overtime.

“Playing both ways — it’s really frustrating when our defense allows a big gain. It’s like we can’t do anything,” Laster said. “But if I come back on offense and I give our team a big run, it pulls momentum back our way.”

Jackson converted on its seventh fourth-down attempt in the third overtime with a pitch to Laster, who finished the drive two plays later with an 11-yard touchdown for his team to take a 56-49.

“Being my third year as a running back, and being able to carry my team like that — it means a lot,” Laster said.

On what would be the Mules final drive of the game, Libla was sacked on the first play by sophomore linebacker Luke Starzinger for a 7-yard loss.

Poplar Bluff only converted on one of its four fourth-down attempts, with the team’s last try coming on fourth-and-3 in the third overtime down by 7.

The Mules failed to convert as they attempted a fake play on a lateral pass from receiver to receiver to come up short and end the game.

Callis jokingly said he learned how to play in overtime from his friends on the soccer team, which did defeat Cape Notre Dame 6-5 during the regular season to win conference, but explained this game was simply “crazy.”

In the locker room during halftime, Callis said there was not a feeling of giving up due to the team’s faults in the first half but just frustration.

To start the second half on the first play following kickoff, Johnson broke off a 55-yard touchdown run for Poplar Bluff to take a 21-7 lead.

Callis explained that how he and his team responded following the score with a 1-yard touchdown run of his own was a big key for Jackson to come back and win the game.

During the game, knowing it could be the last of his high school career, Callis said he prayed a lot for wanting his team to win — not for just himself, but for the seniors on the team who may never play football again.

“You don’t want it to be an emotional game, but you catch yourself thinking all kinds of different thoughts,” Callis said. “It’s just exciting because everybody gets to play one more week of football.”

Jackson will now head to St. Louis to face the reigning Class 5 State Champions Vianney (8-1), which is also the team that ended the Indians season last year in the district championship at The Pit.

Vianney’s lone loss was to Christian Brothers College at 42-35, and Callis says he and his team will have the most confidence heading into a game against the Golden Griffins than any other team will or has all season.

“We go into every game knowing that we can win the game, but having played them for so long — we have confidence in ourselves,” Callis said. “We don’t really look as much at them being so dominant that we can’t play with them. That’s how every team should be, but I think we’ll go into next week really confident.”

The winner of this game will play in the Class 5 State Quarterfinal on Nov. 11.