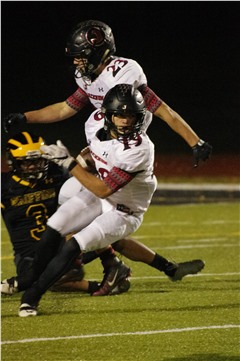 The 2017 season came to an end for the Jackson football team last Friday night on the road as the Indians fell to reigning Class 5 State Champions Vianney 71-50 in the District 1 title game.

This was the same team that ended Jackson’s season last year in the same game, but the Indians made this year’s contest a much closer affair.

Instead of only scoring a season-low 14 points like it did in 2016, Jackson scored 50 points against the Golden Griffins, the most Vianney has allowed all season.

Jackson is used to shoot-outs this season as four of the team’s games ended with a combined score of over 100 points and two other games over 90.

“This is the best offense I think I’ve coached,” head coach Brent Eckley said. “There will be big shoes to fill for next year, but I was really proud of how they executed tonight.”

Jackson’s first two drives ended quickly via three-and-out, allowing Vianney to take a 14-0 lead in the first quarter. A 14-0 lead is how Jackson started last year’s game, but it gave up an unanswered 49 points to Vianney.

On the Indians third drive, senior quarterback Cooper Callis threw his first interception of the game, which was caught by junior Fahreed Cheeks. Two plays later, senior cornerback Cole Welker matched Vianney’s interception with a pick of his own inside Jackson’s 5-yard line.

Starting from its own 2-yard line, Jackson was able to put together an 8-play, 98-yard drive capped off by Callis hitting a wide open wide receiver in junior Jordan Kent for 32 yards on fourth-and-3 in the second quarter for the team’s first score.

The Indians were not able to stop Vianney on its next drive as junior athlete Kyren Williams walked into the endzone on a 3-yard run for his second touchdown of the game.

Whenever Vianney entered scoring territory or a short yardage situation, the team ran its jumbo package. This is where players on Vianney’s defensive line became blockers for the ball carrier, usually Williams, behind the team’s offensive line.

“We bottled them a little bit, but they were really good at [the jumbo package],” Coach Eckley said. “When you look at what they do on offense, they are snapping the ball to a kid that has a lot of Division-I offers.”

The other player who took the direct snap in the jumbo package was Vianney senior quarterback Tionne Harris.

Harris led the game in rushing with 183 yards and three touchdowns on 28 carries, but he mainly gained those yards on option plays in Vianney’s regular spread formation.

Chasing down Harris on most of his runs was senior inside linebacker Nathan Brown, who finished with a game-high 24 tackles, bringing his season total to 196.

Jackson and Vianney answered each other back and forth throughout the second quarter where Callis threw three more touchdowns.

Callis connected with Kent on his second touchdown throw, where Kent was able to make an acrobatic catch for his 22-yard score to make it 21-14 Vianney.

Williams scored his third touchdown on a 7-yard run to answer, but the Callis-Kent connection continued to thrive on the ensuing drive.

Vianney missed its extra point to only lead 27-14, allowing Jackson to make it a 6-point game, thanks to Kent’s 56 yards on two catches with the final being a 1-yard screen for the score.

It only took one play for the Golden Griffins to answer the Indians as Harris connected with Cheeks for a 57-yard touchdown. Harris’ next pass on the team’s 2-point try fell incomplete for Vianney to only lead Jackson 33-21 with 1 minute, 47 seconds remaining in the half.

This forced Jackson to reach into its playbook and go with a shovel pass because of how much space Vianney was giving the Indians up the middle.

“[Vianney] is an attacking defense, so they try to call things to really get after [opposing offenses],” Coach Eckley said. “In the process of working quick tempo, if you change formations sometimes you can find holes.”

The pass from Callis went to senior running back Ethan Laster, who took the ball 81 yards for the score to make it 33-28 20 seconds later.

With 50 seconds remaining in the first half, Vianney answered two plays later as Harris found Cheeks once again, this time for a 35-yard score.

On the kickoff to follow, Vianney forced Jackson’s second turnover of the game for the Golden Griffins to take over at the Indians 21-yard line with a two-score lead.

“You can’t go minus [in turnovers] against a team that’s that good,” Coach Eckley said. “We knew that we were going to struggle a little bit defensively because how good they were and super athletic on the outside. If we could’ve got in a rhythm a bit sooner offensively, maybe it’s a different game. It took us a little while to adjust to their speed.”

Vianney got into its jumbo package when it reached the 10-yard line on first-and-goal, and instead of running the ball in for a touchdown, Williams went with a jump pass on third-and-goal from the 2 to junior defensive end Nate Thurman for the score.

Vianney also converted on its 2-point try as Williams took the ball in himself.

This allowed the Golden Griffins to take a commanding 49-28 lead heading into halftime with Vianney to receive the kickoff to start the third quarter.

Williams scored his fourth and final touchdown run to start the third quarter on a 5-yard run for Vianney to take a 56-28 lead.

Much like in the second quarter, Jackson was able to answer in only one play as Laster was able to break off another 80-plus yard play, this time an 88-yard touchdown run.

Up 20 points at 56-36, Vianney took a little over three minutes off the clock on its next drive as Harris was able to find paydirt in the jumbo package from 3-yards out.

On Jackson’s next drive, Williams was able to sack Callis on a cornerback blitz, but the Indians went to the wheel route on the next play for Callis to complete the ball to Kent for their fourth and final touchdown connection.

After the Indians score, it only took two plays for Vianney to make it a 71-43 game as Harris took the ball 24 yards on an option keeper with 57 seconds left in the third quarter.

This score remained the same for almost the entirety of the fourth quarter as Callis was even picked off by Williams on Jackson’s next drive.

“I know [Callis] doesn’t feel good about having two picks, and he was really upset on the second one,” Coach Eckley said. “I understood why he was, but there wasn’t a whole lot he could’ve done differently on that play.”

The Golden Griffins failed to score on their next drive, reaching Jackson’s 21-yard line but turning the ball over on downs after a incomplete pass by Harris with 6:26 left.

Jackson maintained possession of the ball for the next four minutes where Callis threw the final touchdown pass of his high school career to Laster for 39 yards, setting up the final score of 71-50.

“You look at us and you look at them and think, ‘Should our defensive line hold up against their offensive line?’ No.”  Coach Eckley said. “Are we as fast as the kids they have in the backside? No. I’m really proud of our kids because in a lot of games like this we have played toe-to-toe with [our opponent.]”

Jackson’s season comes to an end at 8-3 overall as it did last year, but the Indians outscored opponents this year 564-419.

Much of that was thanks to Callis, who commanded this offense and led it by completing 65.8 percent of his passes for 3,788 yards, 56 touchdowns and 12 interceptions on 424 attempts.