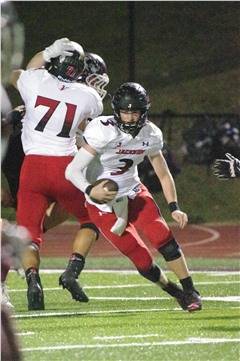 The Jackson football team (4-2) lost its second game of the season when it faced conference/district opponent Poplar Bluff (6-0) on the road Friday, Sept. 22.

Jackson took the lead over Poplar Bluff with 56 seconds left in the first quarter and held it until the fourth quarter when senior quarterback Cooper Callis threw a pick six with 3:14 remaining.

This was after the Mules answered a Jackson touchdown with their own, thanks to a 69-yard kick return by senior Brett Barousse, who was also the player that took Callis’ pass to the house.

“We had no flow in the game on offense — we kept shooting ourselves in the foot whether it be a penalty or a missed assignment,” head coach Brent Eckley said. “We just didn’t do a good job on offense.”

It was Mules senior quarterback Logan Bell who was able to find senior wide receiver Myanza McCain for the score affter Barousse’s return to make it 28-23.

Bell was able to find McCain on 10 separate occasions for 155 receiving yards and the touchdown grab in the fourth quarter.

Jackson kept Poplar Bluff under 100 rushing yards at 99 thanks to senior defensive end Bailey Beggs who had three tackles for a loss and senior inside linebacker Nathan Brown who recorded 19 tackles. Brown has a team-high 112 tackles this season after recording 117 last year.

Bell threw for a game-high 308 yards on 40 attempts for three touchdowns and one interception, and he was able to throw the ball deep for most of the night.

This forced Jackson to rotate between sophomores Markiese Jones, who is the starting No. 2 cornerback, and Seth Waters.

Jones was taken out of the game following Poplar Bluff’s first drive when Bell found senior wide receiver Tyson Cox, who was wide open with Jones covering, for a 36-yard touchdown to make it 6-0 after the failed PAT.

“We are just adjusting there,” Coach Eckley said. “They both [had reps] this week. Seth might be a little bit better of a No. 2 corner, and Markiese is a little bit better at man [coverage]. Either way, they were rolling in there, and Seth had a good week of practice and deserved to get some snaps.”

Waters has primarily played on offense at running back for Jackson this season, but at cornerback he almost came up with an interception in the endzone that forced Poplar Bluff to kick a field goal in the third quarter.

Jackson forced Poplar Bluff’s only two turnovers in the first half, starting with a sack-fumble by Beggs, who also recovered the ball after bringing Bell down for a loss.

This turnover resulted in a touchdown for Jackson on a 12-play, 73-yard drive capped off by a 7-yard touchdown grab by Laster from Callis.

The second turnover came three plays after the score as senior cornerback Cole Welker picked off Bell, who then had to walk a tight rope near the sideline to complete the interception.

Welker’s interception did not result in points for Jackson as junior wide receiver Jordan Kent, who is returning from a tweaked ankle that forced him last week’s game, fumbled the ball after he made a catch.

Poplar Bluff’s field goal made it a 21-16 game with Jackson maintaining the lead.

The next score did not come until the fourth quarter when senior Ethan Laster powered through the Mules’ front seven for a 26-yard touchdown run.

The kind of effort Laster displayed on that play, which seemed to be over when several Mules had him wrapped up, is what Coach Eckley would have liked to have seen more of the next drive.

Poplar Bluff’s coverage is what lead to Barousse picking off Callis on a wide receiver screen where Barousse was able to get in front of the receiver to catch the ball and return it 84 yards for the final score.

The Indians took over on their own 31-yard line after losing the lead where they managed to get to the 49. Laster then fumbled the ball on second-and-4 with less than two minutes to go.

This allowed Poplar Bluff to milk the clock as Bell ran and kneeled the ball to end the game to advance to 6-0 overall and 3-0 in SEMO Conference play.

“[Poplar Bluff] played tougher than us, we didn’t play well enough to win and they made plays when it counted,” Coach Eckley said.

Throughout the night and especially at the beginning of the game, Callis was under pressure everywhere from one of Poplar Bluff’s blitzing linebackers or just from three-man pressure.

Callis was sacked twice on the first drive resulting in a three-and-out, and Coach Eckley said Poplar Bluff’s defense did a nice job adjusting from series to series to make things hard for Jackson offensively.

Callis had to leave the pocket for a majority of the night, but when he did he was able to elude defenders and even scored a 43-yard touchdown run for the Indians first score.

This was due in large part to no receiver being open, which is something Coach Eckley thought his players had a difficult time doing.

“[Callis] kept his eyes downfield well all night,” Callis said. “[Poplar Bluff] did a nice job staying on our receivers — our receivers did not do a great job getting away from coverage once the play broke down and Cooper scrambled. They just didn’t get clean.”

Jackson is now 2-1 in conference play, and it will now face crosstown rival Cape Central (4-2) at the Pit, which is coming off a 50-6 win over University City on the road.