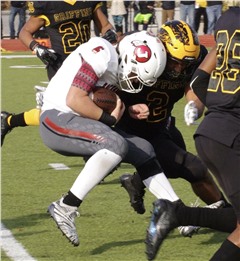 It was the first time in four years the Jackson football team played in the Class 5 State Quarterfinals, and the Indians were facing the team that had ended their season the past three years.

Vianney defeated Jackson to win the last three Class 5 District 1 Championships, but the Golden Griffins moved to District 2 this year.

The 11-0 Indians hoped to avenge these losses, but their offense lost its leading scorer senior wide receiver Jordan Kent on the opening kickoff.

Kent, who has been dealing with iliotibial band syndrome since the Webster Groves game, re-aggravated the injury when he caught the ball and immediately went to the ground.

“[Kent] just didn’t think he could go, so there was not much we could do about it,” Jackson Head Coach Brent Eckley said. “We just had to move forward.”

The first play of the game for Jackson’s offense was a hand off to sophomore running back Daniel Dickerson, who fumbled the ball after breaking past the line of scrimmage.

Vianney recovered the fumble, which then allowed senior athlete Kyren Williams, who is commited to Notre Dame, to score his first of five touchdowns if the game. He did so on the very next play after the Golden Griffins recovered the ball on a 15-yard run to make it 7-0 with 11 minutes, 43 seconds left in the first quarter.

On the Indians next drive and two plays after being called for intentional grounding, sophomore quarterback Cael Welker was picked off.

Jackson’s defense was able to force Vianney to punt the ball to follow, though, as senior defensive end Justin Singleton tackled senior running back Percy Mitchell for a loss.

Singleton was down with an injury after the play and didn’t make a return until the second half.

Offensively, Welker was forced to roll out of the pocket due to Vianney’s pass rush, but this led to the Indians being able to make plays down field.

Welker hit Waters for two first downs, starting with a roll-out pass and later off play action for a gain of 25 yards to get into Vianney territory.

Dickerson then broke off a run up the middle, but a Vianney defender forced him to fumble again for the Golden Griffins to take over.

It only took three plays for Vianney to score as Williams burst through the middle of the defense for a 53-yard score to give his team a 14-0 lead with 5:10 left in the first.

The Indians were able to answer with their first score of the game on the next drive, which was capped off on a 15-yard throw from Welker to Waters on a post route. Jackson then only trailed by one score at 14-7 with 3:35 remaining until the second quarter.

Jackson’s defense forced Williams to fumble on Vianney’s next drive as junior safety Caleb Craft forced the ball out of his hands for senior cornerback Jared Wren to recover.

The Indians used that momentum to tie the game as Welker hit sophomore wide receiver Rhet Liley on a screen pass, who then took the ball 15 yards for a touchdown.

“It just shows the heart of the team, the fact that they bounced back,” Eckley said. “We played really tough and played above their ability in some spots. We’re playing against a good football team, and we don’t look like the teams that have beat them.”

The game was tied at 14-all until Williams scored his third touchdown to start the second quarter with a 61-yard run on fourth-and-short. Vianney’s extra point was no good, which led the Indians to take the lead on the ensuing drive.

On Jackson’s first play to follow, Welker heaved the ball to Liley, who slipped out of a defender’s hands near midfield to score a 73-yard touchdown. Senior kicker Matt Jaco’s extra point gave the Indians a 21-20 lead with 11:34 remaining in the first half.

“[Liley and Waters] both did a really nice job and executed really well,” Coach Eckley said. “I’m really proud of those guys, and I told them before the game that we were going to need some explosive plays out of them. They both did a good job doing that.”

The Golden Griffins were able to regain the lead on their next possession after the Indians started to keep their rushing attack at bay. Junior quarterback Griffin John was able to find senior wide receiver Fahreed Cheeks for a 35-yard score on a go route.

This allowed Mitchell, who had been running the ball up the middle of the Indians defense throughout the game, to break off a 53-yard touchdown and extend Vianney’s lead to 34-21 with 3:45 left in the first half.

Jackson was able to answer the score on its next drive, thanks to an illegal hit on Welker to put the Indians at the Golden Griffins 11-yard line. This allowed Dickerson to make up for his two lost fumbles on the day by narrowing Vianney’s lead to 34-28 with an 11-yard touchdown run.

“He bounced back just like he always does,” Eckley said. “He was frustrated that he couldn’t hang on to the ball early on more so than anybody. He took it to heart, but I’m so proud of him, though, because he’s a kid where if anything negative happens, he doesn’t turn it into another. He bares down and focuses and figures out a way to be successful the next time.”

Dickerson finished with a total of 71 yards, tied for his third-lowest total of the year, on 11 carries. His lone rushing touchdown of the day brought his season total to 22.

Vianney was able to milk the clock on the next drive, all the way down until there was only 17.8 seconds left in the first half. This was when Mitchell scored his second touchdown on a 1-yard run in the Golden Griffins jumbo-wildcat formation.

“I felt pretty good going into halftime even though we gave up that score right at the end of the first half,” Eckley said. “I felt pretty good that we’d be able to bounce back.  There were certain things [Vianney] was giving us that we needed to continue to plug away at. In the end we didn’t execute very well in the second half.”

Jackson only gained three first downs in the second half and didn’t manage to get past midfield until late in the fourth quarter before turning the ball over on downs.

Williams scored two more touchdowns in the second half and finished with 199 rushing yards on 24 attempts. Mitchell also scored once more, bringing his rushing touchdown total to three on 21 carries for 263 yards.

Welker finished as the Indians leading rusher with 95 yards on 15 carries, while going 19-of-29 for 217 yards, three touchdowns and two interceptions. His last pick was taken back for a 51-yard touchdown by sophomore safety Devin Ward.

Leading Jackson in tackles was sophomore outside linebacker Randol McDowell, who finished with a total of 22 stops. Amelunke was behind him with 17 tackles along with one for a loss.

McDowell finishes the season as the Jackson’s leading tackler at 169.