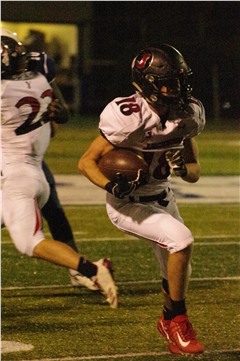 The Jackson football team ended its regular season in high-scoring fashion by defeating St. Louis University 65-42 on the road on Oct. 13.

The Indians, now 7-2 overall heading into districts, recovered three kickoffs in the first quarter only allowing the Junior Bills to have the ball offensively twice.

Because of this, Jackson jumped to an early 28-0 lead after the first quarter where senior quarterback Cooper Callis threw four of his eight single-game, career-high touchdown passes.

Callis also had 450 yards through the air with two picks as he completed 39 of his 51 passing attempts.

Leading the team in receptions was senior wide receiver Jack Warren, finishing the game with 14 catches for 161 yards and no score. Warren was able to gain so much yardage with the plays he made after the catch.

“[Warren] did a nice job catching the ball and getting north,” head coach Brent Eckley said. “He took care of the football, and it’s nice having another guy that’s doing that because it helps us with our balance.”

Jackson’s offense also ran plenty of screen passes against SLUH’s defense to have success, but the Indians had three touchdowns called back due to penalty.

The Indians scored on two of those three called-back scores except for the final one, but Coach Eckley was still pleased his team was able to answer regardless.

SLUH was able to outscore Jackson 28-21 in the second quarter, thanks to the Junior Bills passing attack led by senior quarterback Austin Hannah.

Hannah went 33-for-49, finishing with 361 yards, three touchdowns and one interception, which was made by senior cornerback Cole Welker for his ninth pick this year. Receiving 263 of those yards for three scores on 17 catches was senior wide receiver AJ Hardin.

SLUH only rushed for 152 yards, but running backs sophomore Kellen Porter and senior Daniel Terry were able to break off 20-plus yard runs for one score a piece in the second quarter.

“We just didn’t execute quite well enough on offense to extend the game to a running clock,” Eckley said. “That was what we were aiming for and to sub guys in.”

Jackson now waits till next Friday to play in the Class 5 District 1 Semifinal, where the Indians will travel south to face undefeated Poplar Bluff on Oct. 27.

Jackson fell to the Mules by one point at 29-28 in Week 6, but Poplar Bluff is now without senior quarterback Logan Bell, who suffered a season-ending injury in Week 8.