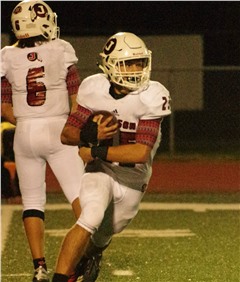 History was made last Friday night in Chesterfield as the Jackson football team was able to cap off an undefeated season with a 42-0 win over Parkway Central.

This is the Indians first undefeated regular season since 2007 and the sixth in the program’s 100-plus year history.

Jackson Head Coach Brent Eckley said a lot of things must go a team’s way in order to finish undefeated, but he said one of the main keys for this team is how determined the players are.

“What I’ve been most pleased with this season is they continue to do what needs to be done,” Coach Eckley said. “They continue to work, watch film, lift, improve at practice — we just haven’t had to drive them. They’ve just been doing it, so it’s been really neat.”

Another key for his team’s success has been the lack of any major injuries except for the foot fracture junior running back Luke Starzinger suffered in the preseason.

Leading the Indians in rushing in place of Starzinger has been sophomore Daniel Dickerson, who rushed for a career-high 255 yards and scored twice on 16 carries against the Colts.

“I trust my lineman a lot, so I was just waiting for them to open up [holes],” Dickerson said. “When I saw [a hole] I hit it and continued to follow my blockers.”

This performance also lands Dickerson in the 1,000-yard club as his rushing total now stands at 1,048 on 120 attempts while scoring 16 times on the ground.

“Daniel missed a couple of reads early on [in the game], but then he just kept plugging and finishing runs,” Coach Eckley said. “I was really pleased with him. [Sophomore running back] Dimechi Herring got some good carries in there as well.”

Another player for Jackson in the 1,000-yard club is senior wide receiver Jordan Kent, who now has 1,292 receiving yards on 69 grabs through nine games.

Kent came up with six catches against Parkway Central for 124 yards and one touchdown to bring his season total to 24, the same amount he through 11 games last season. His career receiving touchdown total is currently 61, tying him for second all time in Missouri history with Luke Montgomery.

Jackson (9-0) failed to convert a successful onside kick to start the game as senior Matt Jaco’s attempt went short of 10 yards, which led the Colts (3-6) to get inside the Indians 25-yard line.

On third and short, a tackle for a loss by junior defensive end Cole Amelunke brought Parkway Central’s offense to the 27. Senior kicker Tyler Holthaus attempted the 44-yard try, but his kick landed just short of the goal post.

The leader in tackles and tackles for a loss through nine games for the Indians is sophomore outside linebacker Randol McDowell, who has recorded 118 stops with 20 coming behind the line of scrimmage.

“In the past three games I think [offenses] have been at least 75 percent run,” Koenig said. “This game I bet it was probably 60 percent run most likely, but they kind of liked to run to the left, so they didn’t come my way. When they did pass, we wanted to get a pass rush on them. The defensive backs were able to do man coverage and the linebackers went on a blitz.”

Koenig, who was unable to play last season due to an injury, has been all over the field for Jackson this season by recording 76 tackles, 13 tackles for a loss, five sacks, two forced fumble recoveries, two blocked kicks and two pass deflections.

Koenig said having to sit out last season was difficult, so going undefeated in the regular season this year as a senior is something that almost brings a tear to his eye.

“It’s always been a dream to be in this moment sitting at 9-0 and going into the playoffs with a full head of confidence,” Koenig said. “It almost seems like it’s not true.”

Jackson’s defense only allowed the Colts to gain 109 yards of total offense with 64 on the ground. Parkway Central junior quarterback Antonio Hutti completed three of his nine attempts for 21 yards while having negative 23 yards on the ground.

Leading the Colts in total yards was senior Ryan Long, who gained 77 yards on the ground off 11 carries.

Kent scored his first rushing touchdown of the season on a 7-yard jet sweep for the opening score with 7:32 remaining in the first quarter.

This would be the only score of the first as Jackson failed to score on its second drive when sophomore quarterback Cael Welker threw his first interception of the game on fourth down from Parkway Central’s 8-yard line.

On the Indians next drive, Welker was able to find sophomore wide receiver Rhett Liley for a 27-yard gain, which set up a 25-yard touchdown run by Dickerson to make it 14-0 with 11:47 left in the second quarter.

Long broke off a 49-yard run to put the Colts on Jackson’s 2-yard line, but an offensive lineman was called for holding to call the run back. Parkway later turned the ball over on downs.

Jackson was able to extend its lead to 21-0 on its ensuing drive as Welker hit Kent on a slant route, who then blew past the defense for a 61-yard score with 9:05 left in the first half. The Indians didn’t score again until the second half as Welker threw his second pick of the game before halftime.

“I think this would be the first game that Cael played like a sophomore,” Coach Eckley said. “I would not anticipate for that happening again because he’s been really good at preparing and is really competitive. There were some other things that broke down.”

Welker finished 15-of-25 with 215 yards along with his one passing touchdown and two interceptions. He also rushed for 49 yards on eight attempts.

Scoring Jackson’s two other touchdowns was Herring, who finished with a total of four carries for 49 yards and two rushing touchdowns.

In the second half when Kent hauled in a 34-yard catch from Welker, the team’s leader in all-purpose yards (1,831) and scoring (162) remained down after the tackle.

Kent was grabbing at his leg when the trainer arrived and was eventually able to walk off the field, but he didn’t return to action for the rest of the night.

After being evaluated by the trainer on the sideline, Coach Eckley said Kent could’ve returned to the game if it had been a closer contest.

“I think he hyperextended his knee, and he’s got more pain in the hamstring area,” Eckley said. “No major ligament damage, so we were just trying to be safe with him.”

Coach Eckley further stated that if Kent had returned to the game he probably would’ve just had to deal with more soreness the following day.

Kent and the rest of his teammates will have this Friday night off as Jackson has secured a bye week and will have home-field advantage throughout the Class 5 District 1 Tournament as the No. 1 seed.

This does not mean the team will have a week off as Coach Eckley said the team will have a chance to practice in full pads three days instead of the usual two. This is also something Koenig is looking forward to so Jackson can prepare for future opponents like No. 2 seed Fox (8-1).

“I think most teams when they get a bye week they take a rest week to let injuries heal, but I honestly think this week as Coach Eckley said we’re going to keep just like a normal week and have more contact days,” Koenig said. “Don’t cool off and get out of the routine — we’re on a very strict routine. Five o’clock in the morning and then seven o’clock at night we get out of practice.

“Nobody misses practice, and we all work as a group and if somebody is not there we hold them accountable. We’re looking at [Oakville and Poplar Bluff], but we’re looking at stuff we need to look forward especially that big back at Fox.”

The back for Fox that Koenig is referring to is none other than the program’s rushing leader, senior fullback Bob Neibert, whose career rushing total currently stands at 2,672 yards.

Jackson will host the winner of Oakville (1-8) and Poplar Bluff (4-5) in the district semifinals Nov. 2. The district title game will be Nov. 9.