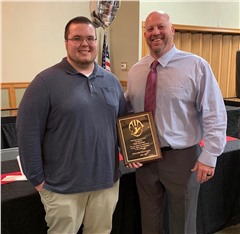 One month after the Jackson football team’s historic season came to an end in the Class 5 State Quarterfinals, the Indians celebrated the year with their annual post-season banquet.

One of those all-state honorees was senior wide receiver Jordan Kent, who became a two-time all-state selection after being named to the first team this season.

Kent was also named this year’s SEMO North Conference Player of the Year and was a finalist for the Carr Trophy, which is awarded to the best player in the conference.

Kent along with the other 10 seniors for the Indians were each honored individually by being given a framed jersey and had one coach speak about them.

“I’m really proud of what you’ve accomplished on the field, but really more than that your growth and development as an individual,” Jackson wide receiver coach Luke Guyot said to Kent. “I appreciate your dedication to our program in the offseason and summer activities and really buying in to being a technician at receiver. … I hope things come together for you so you can keep your dream going of playing on Saturdays.”

Kicker Matt Jaco was the only other senior for Jackson to be named all-state as he was selected to the second team.

Jaco and Kent were also named first team all-district by the MFCA while senior center Dawson Southard, senior outside linebacker Tristen Koenig and senior cornerback Jared Wren were named to the second team.

The rest of Jackson’s all-state selections this season were sophomores as the team finished with a combined total of eight second-year players starting on offense and defense.

Being the only Indian named first team all-state along with Kent was none other than sophomore quarterback Cael Welker.