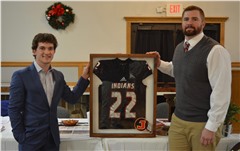 After finishing second place in Class 5 this fall, the Jackson football team held its annual end of the year banquet last Tuesday night to remember the season.

The Indians had several players garner postseason honors as eight were named all-state, 17 all-district and 18 all-conference.

Two of Jackson’s 15 seniors picked up all three honors in running back Seth Waters and defensive lineman Cole Amelunke, who were named second team all-state.

Jackson also had three players named academic all-state, which were seniors safety Caleb Craft and inside linebacker Braiden Wagganer along with Liley.