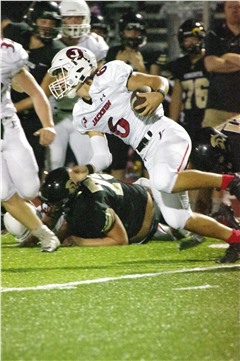 In the first game on the road since suffering its only loss of the season to Lindbergh 45-19 in week two, Jackson football (4-1) traveled north on I-55 to face SEMO Conference North opponent Farmington (2-3).

The Indians defeated the Knights in a 77-42 shootout thanks to scoring on all but one of their drives, which was ended by an interception.

This interception came in the second quarter when Farmington was leading Jackson 14-13.

There were two drops on the drive by Jackson receivers, and on fourth down from the Farmington 38-yard line, Callis was picked off by senior linebacker Colby Barnes.

“That interception wasn’t a great decision, but it was fourth down, so it didn’t kill us,”  head coach Brent Eckley said. “If he’d thrown it away then they would’ve had 15 more yards field position, so it ended up being a pick but they couldn’t return it.”

Coach Eckley said a kind of drive like that puts a lot of pressure on a quarterback, but Eckley said Callis did a nice job of making decisions the rest of the night and throwing the ball accurately.

Senior cornerback Cole Welker was able to intercept Farmington senior quarterback Nathaniel Link’s pass for his fourth interception this year on the ensuing drive, which allowed Jackson to score following the pick.

Callis finished the night 22-of-33 for 333 yards and four touchdowns along with his lone interception. He also ran the ball effectively for 51 yards and two touchdowns on eight carries.

Callis was without leading wide receiver, junior Jordan Kent, but managed to find Kent’s replacement for the team’s second score of the night.

This was junior Matthew Jaco, who is the team’s starting placekicker, and finished with two receptions for 33 yards and a touchdown.

Filling in as the top wide receiver was senior wide receiver Terrico Johnson, who had a career-high 221 receiving yards for two touchdowns on 13 catches.

“It’s very nice for us to score 77 points without Jordan [Kent] because we know he’s a guy we go to and is a super athlete,” Eckley said. “He would’ve been a guy that got a lot targets tonight. He’s a great guy to run fly sweep as well as go vertical and catch the ball. I’m pleased with the other guys since they had to pull a bit more of a load than they’re used to.”

Jackson’s offense had 605 total yards with 11 touchdowns, and seven of those scores came on the ground with senior running back/linebacker Ethan Laster leading the attack.

Laster only recorded an assist, rush and pass deflection on defense, but carried the ball 18 times for 149 yards and two touchdowns.

On the drive where Jackson got the ball back thanks to Welker’s interception, what would have been a 75-yard touchdown run by Laster was erased due to holding.

Laster still received a bulk of the carries and yards on the drive, gaining 43 yards on two carries allowing Callis to find Johnson for a 13-yard score.

One of Laster’s backups at running back, sophomore Seth Waters, scored on two of his three rushing attempts as Jackson gave him the ball in short-yardage situations.

Coach Eckley said he is pleased that he and the rest of the staff are continuing to develop and get players ready to help carry the load at running back as the season goes on. He continued to say Cooley had an outstanding night not only running the ball, but especially on special teams.

“[Cooley displayed] great effort and was tough for the ball,” Eckley said. “I was really, really happy for him and proud of him. He did a great job — made a difference in the game.”

Coach Eckley said there are times when an offense carries a defense and vise versa. This was one of the times where Jackson’s offense had to carry the defense, but Eckley said football is a team sport.

“I’m proud of our offense in the way we executed late,” Coach Eckley said. “Early there were some bumps in the road, but late they caught the ball well, they blocked the perimeter well, the offensive line played hard and Cooper made good decisions. Defensively we struggled in some spots, but it’s an option-based offense. [Farmington] played well offensively — we didn’t play so well defensively.”

Farmington gained a total of 433 yards offensively, rushing for 304 of them. Two Knights, Nathaniel Link and junior Tycen Grey, each rushed for over 100 yards.

Link led Farmington in rushing with 151 yards and three touchdowns on 22 carries by being able to fake the pitch to Grey against Jack-son’s defense for most of the night.

“[Link] did a really nice job. He threw a pretty accurate ball, but he was deceivingly fast running it,” Eckley said. “I was really surprised he was able to get loose as much as he could. We just didn’t tackle real well, and that’s something we’re going to work on this week.”