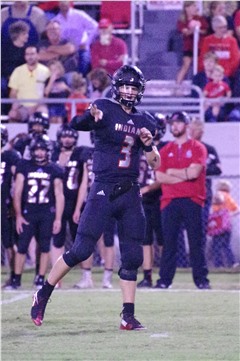 Before the beginning of the 2017 season, Jackson football head coach Brent Eckley said his quarterback, senior Cooper Callis, had the potential to be the best player in southeast Missouri.

At the 72nd SEMO Conference Football Banquet on Nov. 27, Callis was named the recipient of the 2017 Carr Trophy, which is annually given to the most outstanding football player in the conference.

Callis is the first Indian to win the award since former quarterback Dante Vandeven did in 2014, who had a combined 43 touchdowns (24 passing, 19 rushing) while leading Jackson to a 10-2 record and a Class 5 District 1 Championship.

Callis threw for 3,788 yards and 56 touchdowns on 424 attempts with a completion percentage of 65.8 while only throwing 12 interceptions this season. He was also Jackson’s second leading rusher with 243 yards and nine touchdowns on 105 attempts.

As Jackson’s starting quarterback for the past two seasons, Callis has led the Indians to an overall record of 16-6 as well as a SEMO Conference Championship in 2016.