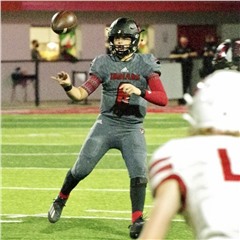 For the first time this season on Friday night, the Jackson football team’s starters played for an entire game as the Indians hosted Class 6 Fox at The Pit. Both teams were undefeated at 5-0 and ranked in the top 10 of the statewide media rankings heading into the contest.

Most of the Indians starters have yet to play a full game this season due to Jackson usually having an insurmountable lead after the first half. Things looked business as usual for Jackson as it took a 21-0 lead over the Warriors after the first quarter of play.

Welker, who was forced to miss last week’s game against Sikeston to serve a one-game suspension, finished with 229 passing yards, four touchdowns and no interceptions while going 18-for-26 (69.2 completion percentage). Welker also finished second in rushing for Jackson with 63 yards on 12 carries.

Liley hauled in two more touchdowns in the second half to finish with a total of five catches for 77 yards after being forced to exit the game in the second quarter. This was due to Liley making helmet-to-helmet contact with a Fox defender, but he was able to pass concussion protocol and helped lead the Indians to victory.

“Cael is really good at handling the ball and making decisions — he keeps plays alive,” Jackson head coach Brent Eckley said. “Rhet is a tough matchup because he’s such a big, physical kid. We don’t use a tight end a whole lot, so when we do that it’s tough for defenses to adjust. Sometimes we can just manipulate them a little bit.”

While Liley was Jackson’s leader in touchdowns scored, junior wide receiver Kannen Turley led the game in receiving yards at 96 off seven catches. Turley converted on several first downs for the Indians while also making a leaping grab at the sideline in the first half.

Liley’s two touchdown catches in the second half were much needed after Fox was able to make it a six-point game at 27-21 with four minutes, 34 seconds left in the second quarter. All three of the Warriors touchdowns were 60 or more yard runs as senior Jauhad Thompson broke off runs of 60 and 79 for two scores.

Thompson finished with a game-high 160 rushing yards on eight carries in Fox’s triple-option offense, which featured motion and misdirection plays to try and throw off Jackson’s defense. The Warriors third and final touchdown run not scored by Thompson was from their senior quarterback Brock Inman, who recorded a 69-yard run for the touchdown.

Inman, however, didn’t gain one more yard on his other 13 carries and completed seven of his 13 passes (53.8%) for 83 yards while throwing an interception in the fourth quarter. The interception was made by senior defensive end Cole Parker, who took it back 80 yards for the touchdown.

Parker’s score was the Jackson defense’s second touchdown of the game as senior inside linebacker Bryce Norman recorded a pick-six of his own earlier in the fourth. Norman intercepted his pass from junior backup quarterback Bryce Latimer as Inman was out of the game with a shoulder injury.

Norman and Parker’s touchdowns were the final two for Jackson as the team scored 32-unanswered points and were able to defeat Fox handedly at 59-21 to advance to 6-0 overall.

The Indians three other touchdowns came in the running game as senior running back Daniel Dickerson scored two along with producing a team-high 93 rushing yards on 17 carries. Also scoring a rushing touchdown was senior Dimechi Herring, who is also a starter on defense and only had three carries.

Jackson was without its backup running back in sophomore Tony Williams for the second-straight game as he has been out with a dislocated shoulder. Coach Eckley hopes to have Williams back this Friday.

“Anytime you score on defense it’s certainly a plus and it’s awesome,” Coach Eckley said. “I thought our defense played really outstandingly and we were shorthanded. We played a good portion of the entire second quarter without two defensive starters. That makes it tough because it’s the same position group — it’s not like it’s a lineman and a defensive back. It’s two defensive backs, and no one is deep enough to handle that.”

Norman and fellow senior inside linebacker Randol McDowell tied for a team-high 13 tackles as McDowell also came up with one sack, one forced fumble and one fumble recovery. Junior outside linebacker Ryley Styer also forced a fumble along with five tackles and two tackles for a loss.

On top of scoring his first career touchdown, Parker finished third on Jackson in tackles with nine and had two stops behind the line of scrimmage. Norman and senior outside linebacker Garner Horman also made two tackles in the backfield.

The Indians (6-0, 3-0 SEMO) will play their final regular-season game at The Pit against SEMO Conference and Class 5 District 1 opponent Farmington (6-0, 3-0) on Friday. This will be for the conference championship as Jackson is hoping to three-peat.