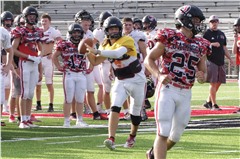 The Jackson football team finished with a 11-1 overall
record last season and won the Class 5 District 1 and SEMO Conference
Championship before the Indians season came to an end two games away from
reaching the state title game.

Jackson returns 13 starters including four Class 5 All-State
honorees, and the community showed it’s excitement for this season by attending
the team’s annual Gatorade Game Friday night. It was easily the biggest crowd
Indians head coach Brent Eckley has seen for this game in his eight years with
the program.

“It’s really cool to know we’re taking the field playing a
scrimmage and we had quite a few people here — it was a really nice crowd,” Coach
Eckley said. “I’ve coached multiple regular-season games — district-level games
— that we’ve had less people at than what we had tonight for the Gatorade Game.
It’s a testament to our fans, our community and the parents.”

Even though Jackson returns more all-state players on
offense than defense, the Indians defense was able to frustrate the offense on
several occasions by recording multiple sacks, forcing fumbles, deflecting
passes and even came down with an interception.

Sophomore wide receiver/safety Blake Blackman, who is
currently on the second team for both units, came up with the interception,
while McDowell, senior defensive end Cole Amelunke and junior inside linebacker
Bryce Norman sacked Welker.

These defenders along with senior defensive end Bret Meyer,
junior nose guard Zane Lawrence-Collier and junior outside linebacker Garner
Horman also made plays at and behind the line of scrimmage.

Jackson’s offense was still able to come up with four
touchdowns, though, as Welker connected with senior wide receivers Dalton Skrob
and Luke Starzinger each for a score.

Welker also ran one of the touchdowns in on an option, while
junior running back/cornerback Dimechi Herring broke off a 50-plus yard run for
a touchdown early on. Herring is also one of Jackson’s starting corners
opposite of senior Markiese Jones.

“I told the players afterwards I was really proud of them
because we’re getting smarter,” Coach Eckley said. “Our offense is looking to
see what the defense is lining up in and they adjust the lineman or adjust the
route based on blitz or communication on protection. The defense is doing the
same thing — they see a formation and they’re adjusting by seeing what’s coming
out of the offense. It’s like chess masters going back and forth, and I’m
really pleased with that.”

One of the reasons why Jackson’s offense was for the most
part contained by the defense was that one of the unit’s returning starters on
offensive line, senior Nathan Harrison, did not play in the game due to medical
reasons.

The Indians have the task of replacing three starters on the
offensive line. Starting in the Gatorade Game was junior Thomas Ruch at center,
junior Cameron Byrd at left guard, sophomore Liam Bryant at right guard and
finally sophomore Ashton Flinn at right tackle.

“We’re a little thin offensive line wise and defensive line
wise right now, but mostly on the offensive line,” Coach Eckley said. “Out of
our top eight, we’re missing three of those. We’ll get them back, so that makes
it a little bit tough.”

Jackson’s offense will also be without one of the top
receivers statistically in the history of Missouri high school sports, Jordan
Kent, who recorded 28 touchdowns and 1,498 yards on 76 catches last season.

Jackson returns receivers like seniors Seth Waters and
Michael Schneider along with juniors Rhet Liley and Ty Moran, while Blackman,
Skrob, Starzinger and sophomore Kannen Turly will also be in the mix.

Waters finished second in receiving behind Kent with 606
yards and seven touchdowns off only 26 catches. Liley finished with the second
most receptions for Jackson with 39 for 490 yards and four touchdowns.

“Balance wise I thought we were OK,” Coach Eckley said. “We
got a few big plays and some special plays, but I also don’t think we were
quite consistent enough. That also happens when you’re playing eight guys in
four spots. Sometimes you don’t get a chance for one guy to be on the field and
look at him, look at him and look at him. It’s maybe a little bit of a catch 22
in the fact we didn’t have one guy making a whole bunch of plays.”

Another receiving option for Welker this season will be
Dickerson and Herring out of the backfield, who combined for 283 yards and
three touchdowns last year.

This Friday, Jackson will travel north to Festus for a
jamboree, where the Indians will scrimmage against the host Tigers, Farmington
and Seckman.