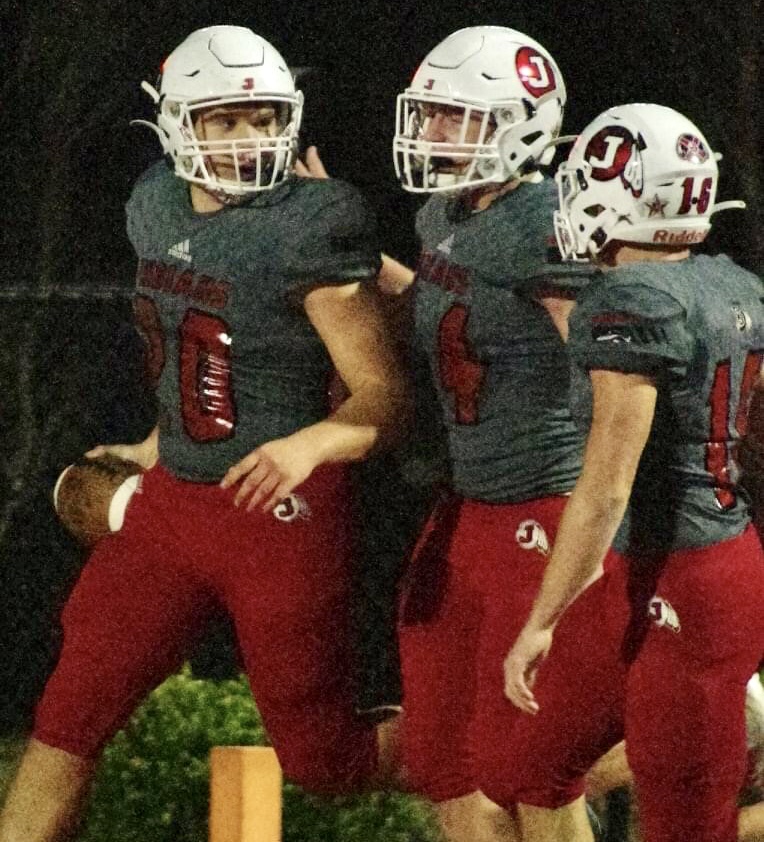 Coming off a bye week, the Jackson football team continued its dominance of the 2020 season by defeating Poplar Bluff 55-0 in the Class 5 District 1 Semifinals on Friday at The Pit.

With the win, the Indians have advanced and will play in their fifth-straight district championship game this upcoming Friday night. The shutout of the Mules also happened to be the team’s third of the season.

Carr only finished with 60 yards through the air on a total of 25 passing attempts as he only completed 10 throws for a 40% completion rate. He also ran the ball five times, where he gained 29 yards.

McDowell came up with his interception in the second quarter and ran it all the way to the endzone for a 46-yard touchdown. McDowell also finished second in tackles for the Indians with 10.

Poplar Bluff was only able to gain 183 yards of total offense 123 of them were on the ground. Leading the rushing attack for the Mules was senior running back Gavyn Hays with 65 yards on 13 attempts. Fellow senior running back Damarieus Robinson had 13 carries as well but only mustered 29 yards.

Other defenders to come up big for Jackson in its shutout was none other than senior inside linebacker Bryce Norman, who recorded a game-high 12 tackles along with one tackle for a loss and one pass deflection. Sophomore defensive end Tony Terry also had a pass breakup while finishing with five tackles and two in the backfield.

Tying Terry for the team high in tackles for a loss was junior outside linebacker Ryley Styer as he also had a pass deflection. Hartlein led the Indians in breakups with a season, career-high two.

One player made a return from injury to Jackson’s defensive line this week in senior defensive end Chase Gray, who has yet to play since the Indians Week 2 win over Hillsboro on Sept. 4. Gray finished with two tackles and one TFL in his team’s win over Poplar Bluff.

“I’m really happy for him because he worked his tail off in the down time,” Jackson head coach Brent Eckley said. “He got bigger and more physical — he probably gained 20 pounds in that time off. He’s worked really hard in the weight room, and he’s been chomping at the bit. He wasn’t in the middle of season form, but he played hard. He’s a real coachable kid.”

Offensively, Jackson totaled 471 yards with 228 on the ground as senior quarterback Cael Welker threw a game-high 243 yards with two touchdowns while going 16-of-25 (64% completion percentage). Welker also picked up 55 yards on the ground off one attempt.

Welker also finished the game without throwing an interception — something the two-time all-state quarterback has yet to do this season. Welker’s backup, who is also his first cousin, junior Cameron Marchi has yet to throw an interception as well.

“It’s pretty impressive,” Coach Eckley said. “He won’t be the first to make it through a season without an interception [in Missouri history] — there’s been guys who’ve done it before. I’m really pleased with what he’s been doing to take care of it.”

Being on the receiving end of Welker’s touchdown passes were first cousins senior tight end Rhet Liley and junior wide receiver Kannen Turley, who combined for 14 catches and 240 yards. Turley led the way by hauling in 10 of those receptions along with 179 receiving yards.

Leading Jackson’s run game was senior running back Daniel Dickerson as he totaled 83 yards on eight attempts (10.4 yards per carry) with two rushing touchdowns. Sophomore running back Tony Williams also found the endzone twice on the ground along with 44 yards on nine carries.

“I thought our execution was a little bit off — we weren’t quite as smooth as we were maybe three weeks ago,” Coach Eckley said. “We have to get back into the groove, but I thought our kids played hard and were physical in the box. We dug ourselves a hole multiple times offensively where we wouldn’t execute on something, and we had to overcome it. Then we were able to overcome it and get a first down, get a big play or score.”

Now Jackson will take on Farmington for the Class 5 District 1 Championship at home after defeating the Knights 56-14 to three-peat as SEMO Conference Champions back in Week 7 on Oct. 9. If the Indians can beat Farmington once again, they will win their third district title in a row.

Back against the Knights in Week 7, Welker completed 74% of his throws for 230 yards and four touchdowns as he also scored once on the ground with a 25-yard run. Turley caught three of Welker’s four touchdowns and had a total of 112 receiving yards on five grabs.

Jackson also had success on the ground against Farmington as Williams ran for a team-high 95 yards and one touchdown with nine carries. Defensively, Norman and McDowell combined for 39 tackles with 21 and 18 stops, respectively.