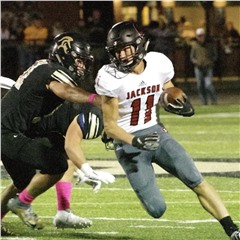 It was the first time in a long time Jackson’s football team was unable to score points in the first half on Friday night as SEMO North Conference foe Farmington shut the Indians out and took a 7-0 heading into halftime at H.C. Haile Stadium.

Jackson’s offense was unable to score on the first five drives of the game and even lost a fumble inside its own 30-yard line, which then allowed the Knights to score the first points of the game halfway through the second quarter.

“It wasn’t any one person, it was our whole offense [that was the problem in the first half],” Jackson junior quarterback Cael Welker said. “We didn’t come out ready — we kind of blew them off and didn’t think they were gonna be that good, I’m not gonna lie. We weren’t focused coming into the game, and we saw what happens when we’re like that in the first half.”

Farmington junior running back Braden Botkin scored the lone touchdown of the first half with a 28-yard run, who finished with a game-high 89 rushing yards on 24 attempts. This was the first time any opposing offense combined for 100 or more rushing yards against the Indians defense all season.

Farmington also won the time of possession battle, forcing Jackson’s defense to be on the field for a majority of the game at 27 minutes, 57 seconds. Out of Farmington’s 54 offensive plays, 48 of them were runs.

“The way their offense works, they try to run the clock down — they go really slow,” Jackson junior outside linebacker Randol McDowell said. “They try to take as much time as possible so our offense doesn’t have as many chances to score. We were really motivated especially after halftime. Our whole team was just motivated to come out here and play better just all together.”

McDowell finished with a game-high 14 tackles as he recorded three for a loss while also forcing a game-high two fumbles, one of which was recovered for a 22-yard touchdown by fellow junior outside linebacker Garner Horman in the fourth and final quarter.

Horman also came up with three tackles behind the line of scrimmage on his own, while three other Indians combined for double-digit stops along with McDowell. Senior defensive end Cole Amelunke and junior inside linebacker Bryce Norman each registered 13 tackles, while senior inside linebacker Riley Pike paced them with 11 stops and also had two for a loss.

The Knights offense motioned on nearly every offensive snap, which allowed senior running backs Demond Guthrie and Royce Harris to combine for 118 yards on 16 carries. These two primarily had success on outside runs off the option pitch from junior quarterback Kaden Files.

This forced Jackson’s defense to play both safeties close to the line of scrimmage as seniors Caleb Craft and Grant Sides combined for 17 tackles and three for a loss.

McDowell’s final forced fumble of the night in the fourth quarter was when Files pitched the ball to Guthrie, so McDowell instantly knew where to go. His forced fumble recovered by Horman for the score gave Jackson a three-score lead with 3:08 left in the game.

“I just went right to my read, and I saw him turn and pitch it,” McDowell said. “I knew if I just hit [the ball carrier] hard enough, he would have dropped it. I didn’t know anybody was going to pick it up [for a touchdown], I just went right at him and hit him as hard as I could.”

The only other touchdown Jackson allowed in the game was in the third quarter as Files was able to connect with Harris on one of his six passing attempts for a 67-yard touchdown. This score tied the game since the Indians were able to find the endzone twice to score 14-unanswered points in the quarter.

Farmington’s defensive line was able to apply pressure on Welker for most of the night, and they were able to bring him down for a total of three sacks as junior defensive tackle Judd Cunningham came away with two before the end of the first half.

The Indians offense was unable to pick up a first down on their next drive, but they were able to score on their next possession to lead for the first time in the game.

Welker was nearly intercepted on the first play of the drive, but he was then able to find Turley for a 27-yard catch and run to get into Farmington territory.

Starzinger nearly scored a rushing touchdown to get Jackson inside the 10-yard line on a jet sweep for 21 yards as senior running back Seth Waters capped off the drive with a 3-yard touchdown. Waters finished with a total of 159 all-purpose yards as he gained 77 on 18 carries, 44 through the air on seven catches and 38 on three punt returns.

“That’s what I’ve been talking about maybe for a week or two is that’s something that Seth can do that a lot of running backs can’t do,” Jackson head coach Brent Eckley said. “We can throw it to him out of the backfield, and we’re going to try to target him as much as we can because he can make people miss.”

Farmington’s defense also played man-to-man coverage with its safeties deep playing zone coverage, which didn’t allow Welker to have much space to throw. Eckley said the key to his offense finding success and being able to score was finding balance.

It only took Jackson three plays to break the tie in the fourth quarter as Waters was able to break off for a 19-yard gain. The Indians then went no huddle and called the same play as Welker kept the ball instead of handing it off and passed it to Skrob for a 21-yard touchdown.

“We would’ve been OK running it because [Farming-ton’s defense] was a little bit gased and they were cross facing and gap exchanging,” Coach Eckley said. “There was going to be a seam inside, but [Welker] saw the out. He banged it out there and [Skrob] made a really nice job catching the ball. He had a drop earlier in the game and bounced back from adversity. He made a play with one guy trying to tackle him and made another guy miss and scored.”

The final score offensively for Jackson was with 3:21 left in the game as Welker broke off for a 10-yard touchdown run after the Knights were called for a personal foul after a helmet-to-helmet hit on the junior quarterback. Welker finished with a total of 49 yards on 15 rushes.

Jackson faced off against the Mules twice last season and beat them both times by a combined score of 112-20 at The Pit. Poplar Bluff’s lone win in conference play this season came against Sikeston at 61-18, but the team fell to Farmington 49-20 in Week 4 and Cape Central 36-0 last week on the road.

If the Indians defeat the Mules on Friday, they will be SEMO North Conference Champions for the second-straight season. “We’ll be really riled up because we have a chance to win conference,” McDowell said.