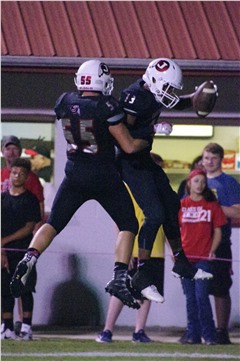 For many boys growing up and running through the stands on Friday nights at The Pit, it is their dream to eventually play under the lights as a member of the Jackson football team.

Following the game, head coach Brent Eckley said he did not see many tears, but he said if there had been any they would have come from him and the rest of the coaching staff instead of the players.

“[The tears would have come from us] thinking back to the growth that [these seniors have] had, and the time they’ve put in,” Eckley said. “All the times on the field, all the successes and some of the hard times. The fact they finished with a win is outstanding.”

One of those seniors who has went through this process to become one of Jackson’s leading receivers is Terrico Johnson.

Against De Smet, Johnson recorded a game-high 11 receptions for 158 yards and tied the game-high in touchdown grabs with fellow wide receiver junior Jordan Kent at three.

Johnson is one of the team’s starting slot receivers opposite of Kent, and before earning the position, he watched and learned from former Indians Jeremy Elliott and Quentin Kent.

“I was fortunate enough to back up [Elliott and Kent] my sophomore and junior year,” Johnson said. “I’ve been in good position over the years, and it put me in a position to be where I am now as a senior.”

The duo of Johnson and Kent has already exceeded the Kent Brothers’ in receptions (121) as well as touchdowns (27) while also accumulating 1,756 yards in just eight games.

Jordan Kent also missed one game and was not 100 percent versus Poplar Bluff, but with Jordan being back to full go the Indians have scored 63 points in back-to-back games.

“All offseason Terrico had been working, and he worked last year into some games,” senior quarterback Cooper Callis said. “He knew, I knew and everybody knew he would kind of have to step up big time to replace Quentin because he was such a key part in our offense.”

Callis broke his single-season, career-high touchdown passes of 34 by tying his game-high seven touchdown throws against the Spartans, bringing his season total to 37.

Jackson took an early 14-0 lead over De Smet with 8:08 left in the first quarter after Callis and Kent were able to connect for their second touchdown.

On De Smet’s first drive, the Spartans turned the ball over on downs, but junior quarterback Nate Martens was able to lead the offense to six on their next drive.

Martens ran the ball for a 6-yard touchdown, which was the third-designed quarterback run in a row for De Smet.

Martens ran the ball 19 times for 122 yards and two scores while completing 50 percent of his passes for 236 yards and three touchdowns but had three interceptions.

“I was really pleased that our defense continued to rally to [Martens],” Coach Eckley said. “We struggled getting home on him on a lot of pass rushes. We got a couple shots, but not a lot and he held up really well. He’ll be a big time quarterback.”

De Smet forced Jackson to turn the ball over on downs after Martens’ touchdown, which allowed him to find freshman wide receiver Ra’shod Harvey-Smith for a 41-yard score to make it 14 all with 1:23 left in the first.

Harvey-Smith had six receptions in the game while recording 162 receiving yards and his lone touchdown.

Heading into the game against Jackson, sophomore wide receiver Jordan Johnson had averaged 29.6 yards per catch, but the Indians secondary held him to 10.2 yards a catch on five grabs for 51 yards and a touchdown.

“We had that one [busted coverage] at the end of the half I was frustrated with, but [Johnson] made a great play and [Martens] made a great play, too,” Coach Eckley said. “It is what it is, but I say we held them to 33, but they scored a couple late there. We felt like we put [the game] out of reach [early] and our defense played well.”

The Indians went scoreless again on the following drive after De Smet tied things up, but junior Matthew Jaco ended the Spartans ensuing drive by picking off Martens.

Jackson took back the lead over De Smet 21-14 three plays later when Callis connected with Johnson for their first touchdown combo of the night for 17 yards.

Jackson scored off this turnover as well when Callis pump faked the ball to confuse the defense and found Johnson in the endzone for an 8-yard touchdown to make it 28-14 with 6:42 left in the first half.

“[Those turnovers] gives the defense confidence and it gives [the offense] confidence,” Callis said. “The real key is scoring off of those turnovers. That’s huge to be able to play well offensively throughout the whole game, and so once the defense gave us the ball back we had the mindset that we were going to go out and score.”

Jackson scored two more touchdowns off De Smet turnovers, the first being Callis to Kent for 34 yards and the second an 18-yard throw from Callis to senior running back Ethan Laster.

The Indians took advantage of their 42-21 lead at the half as Callis scored two, unanswered rushing touchdowns in the third quarter to make it 56-21 over De Smet.

Jackson now has one more regular season game before the start of the Class 5 District 1 Tournament where the Indians will likely receive a bye week.

The Indians will head north to face St. Louis University (3-5) for Week 9.