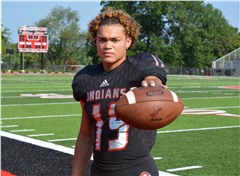 Last season, four Jackson football players were each selected to one of the Class 5 All-State teams, and only one of those players is returning this season.

The lone returning all-state honoree is senior wide receiver Jordan Kent, who was named to the third team following a junior campaign where he snagged 81 passes for a team-high 1,307 receiving yards and 24 touchdowns.

Kent started playing football at the pee-wee level, which is where his passion for the game began and led him to become the person he is today.

“My brother and my dad were also a big impact on me playing, too,” Kent said. “My dad played whenever he was in high school, so I really wanted to play in high school, too.”

One thing Kent loves about football is the brotherhood he is able to create with his fellow teammates to possibly form a life-long bond.

Kent didn’t have a problem doing so his sophomore year since he was playing with his blood brother and 2017 graduate Quentin Kent. The two became one of the best receiving duos in Southeast Missouri in 2016.

The Kent Brothers combined for 113 catches, 1,932 yards and 25 touchdowns that year while helping lead Jackson to winning the SEMO Conference Championship. The two also scored a combined seven touchdowns on the ground with 373 yards on 43 carries.

“That was a special thing — I had fun playing with him,” Kent said. “I wish I could’ve played with him more. He was actually supposed to be in the grade above me right now, so if he would’ve been playing last year we would’ve been pretty good.”

Quentin earned third team all-state honors following his senior year that season with a team-high 68 catches and 1,146 receiving yards and was second in receiving touchdowns behind Jordan with 12.

Jordan was named second team all-conference and all-district following his first varsity campaign, which came to an end against the eventual 2016 Class 5 State Champions Vianney.

Johnson and Kent combined for 166 catches, 2,368 yards and 41 touchdowns receiving last season for both to earn first team all-conference honors.

Throwing each pass and touchdown to Kent each of his first two varsity seasons was 2018 graduate and current Pearl River Community College quarterback Cooper Callis.

Kent said the three formed a special bond that season because of all the work they put in the offseason.

“Terrico, Cooper and I all got along so well,” Kent said. “We all came [to The Pit] in our off time and threw around the ball. We actually hung out a few times to get to know each other better and see how we would all play on the field together.”

Kent now has had all new players to work with this offseason, but he said this year’s starting quarterback, sophomore Cael Welker, is pretty good.

Kent said he knows he will continue to have shoes to fill by being the only returning starter at wide receiver while also having to lead the younger players.

“I’m going to have to be a leader and get other people on the same level as the rest of the team,” Kent said. “Cael — I believe in him. I hope he believes in me, too.”

Over the offseason, Kent and Welker have come to the field to work on chemistry and timing to make sure his passes would be on target when throwing to Kent this year.

Kent knows about being a first-year starter and the nerves that come with it, so whenever he notices Welker getting nervous, Kent will talk with him and tell Welker to go with his instincts.

The player who looks to fill the opposite slot receiver position from Kent is junior Dalton Skrob, who Kent said had the ability to start last year.

“He played some last year a little bit, and he’s pretty good,” Kent said. “This year he’s going to have to have a big impact for us.”

Other receivers Kent has been working with is fellow seniors Tristin Koenig and Matt Jaco, who filled in for Kent last year when he was out with an injury and caught three passes for 40 yards and two touchdowns.

One of the key things Kent works with these receivers on is their releases because some of the players at the position are “really slow” with them.

“Yesterday, we were practicing, and we had to go over releases,” Kent said. “We were working on our double steps and single, and we just worked on it and worked on it. I think they got it down.”

Kent’s favorite route to run as a receiver is the post route because he gets in the open field and the ball is thrown deep for him to catch.

Another route Kent has success on is the wheel route, which is where a receiver runs parallel to the sideline and then goes up the field.

One of the most important things for a receiver to do is to create separation from a defender. Kent does this with a trio of go-to moves, which is the stutter step, single move and double move.

The stutter step is where a player moves both feet sideways rapidly, which can confuse a defender to where the player is actually going.

Single moves are when a receiver sticks their foot in the ground and gives a head nod in one direction before going the other way.

The double move is where the receiver takes a small step in the direction they intend to release and then takes a big step and head fake before taking off in the initial direction.

“Jackson’s offense is more of a passing game than it is a running game, so I feel like wide receivers get the ball more than most people on the field,” Kent said.

Heading into this season, head coach Brent Eckley said he wants Kent to have twice as many touches as he did last season, but that it will be a difficult task since teams know it’s coming.

Coach Eckley said whatever the offense tries to do with Kent is going to be a win for Jackson, so the key will be getting him in one-on-one situations.

“He is such a special talent, and he is considerably better than what he was last fall athletically,” Eckley said. “He’s heavier, he’s faster, he’s more explosive and he’s stronger — he’s had a really good offseason. A lot of times our quarterbacks are looking pre-snap if they’re giving us a gift, but they’re also trying to figure out where Jordan is going to be, and if his route is going to happen in an area of open space after the ball is snapped?”

One of Kent’s goals is to play college football, and he currently has offers from Southeast Missouri State and Lindenwood. He has yet to commit to any school as he is waiting for other offers.

Coach Eckley said he thinks Kent has a chance to play college football, especially with the growth he has seen from the senior over the past three years.

“He’s a kid that could earn playing time early [on the college level] because he’s so competitive,” Eckley said. “He could be a good person to block kicks on either punt or PAT because he’s so athletic, quick and explosive. That might be his first way to get on the field.

“He might be a guy on kickoff return or a guy that could be on kickoff. He might go to the next level and end up being a corner because of how physical and gifted he is. He could put on 15 more pounds from his senior year to his freshman year and be a running back. There’s a lot of things he can just do.”