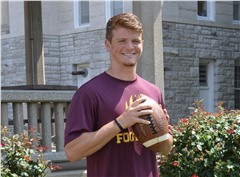 While growing up watching football games at The Pit, Cooper Callis dreamed about running out of the tunnel and playing under those Friday night lights as a Jackson Indian.

Callis more than accomplished that goal by becoming Jackson’s starting quarterback, throwing for a combined 6,754 yards and 90 touchdowns while earning all-conference, all-district and all-state honors his junior and senior year.

Through his years playing at Jackson, Callis started dreaming about something else — playing “big-time” Division-I college football.

Callis had Division-I offers from Arkansas State, Louisiana Tech and Southeast Missouri State, but on May 1 via Twitter, the Jackson star announced he committed to playing at Pearl River Community College.

People took Callis going the junior college route as a surprise since he had Division-I offers on the table, as well as opportunities to play in the Ivy League.

“I think it was just the opportunity that came out of playing at JUCO [junior college] that was a big plus for me,” Callis said. “It’s a really unique opportunity. Pearl River had their starting quarterback go down this spring and being able to have the opportunity to start right away, stay there for just a semester and sign somewhere in December to go somewhere else was hard to overlook.”

Pearl River was only able to offer five out-of-state scholarships, with Callis earning one of them. When he went down to Poplarville, Mississippi, to meet the staff, he knew he had made the right choice.

“The coaching staff is awesome — they were really welcoming,” Callis said. “… They want what I want, and they know I want to go to a bigger school as soon as possible. They are all for me doing that, and they completely believe in me. I really like their confidence in me and what they think my upside is.”

Callis is also confident in his abilities on and off the field, so by going to Pearl River he is betting on himself to be able to grow as a player and earn a scholarship from a big-time college football program.

Last week on June 27, former Pearl River quarterback Markevion Quinn committed to Memphis and will enroll in the fall.

Callis said he will only be attending Pearl River for one semester with plans to transfer and sign with a Division-I program in December.

One of the programs Callis visited in high school was Memphis along with Indiana, Louisville and Mississippi State.

“I think going to those places and seeing those players play — it wasn’t a shot at lower schools,” Callis said. “Like I don’t think I’m way better than [those schools] by any means, but I think I have the ability to play there. I have confidence in myself that I would be able to play there and play well at schools like that — whether they didn’t take me because they didn’t think I could play there or because of the location of where I play in Jackson.”

Callis said his confidence of playing big-time college football grew when he visited bigger schools. He saw those type of players compete and believes he can play on that level.

When attending exposure camps in the offseason, the area that Callis played in was always on topic when he spoke to coaches because of their concern of the competition he was facing.

Callis said because he didn’t live in a metropolitan area like St. Louis he was “kind of put in a corner,” during those camps. Coaches would even ask him, “Where is Jackson? Who do you guys play?”

“I just want to be like, ‘We play every single St. Louis school we can possibly play,’ and we play them pretty well, too,” Callis said. “I think it’s just hard to understand since we aren’t from a metro area. It’s like, ‘You play those schools, but do you really play those schools?’ With the level of competition [at Pearl River,] I’ll be on the same playing field as everyone else.”

One school out of St. Louis Jackson has faced over the past few years is Vianney, which recently had running back Kyren Williams commit to Notre Dame.

The Indians have fallen short against the Golden Griffins the past two seasons with Callis as their starting quarterback, but Vianney went on to win the Class 5 State Championship in 2016 and fell to Class 5 runner-up Pattonville in the quarterfi-nals this year.

In the 2017 district title game, Callis passed for a game-high 416 yards and six touchdowns on 36 attempts while Notre Dame-commit Williams rushed for four touchdowns and 95 yards on 16 carries.

At Pearl River this season, Callis will be facing one of the top junior college programs in the nation, the 2017 National Champions East Mississippi Community College.

EMCC’s football program is also widely known because of the Netflix series “Last Chance U,” which features players on their journey to earning a scholarship to a Division-I program.

The school is no longer featured on the show, but Callis mentioned his new coaching staff has told him on more than one occasion about the recruiting traffic that comes through playing JUCO in Mississippi.

“I think a lot of people just aren’t aware of what junior college does for you,” Callis said. “Some people think you have to go there because of grades, but some people are aware that you can get more exposure. Mississippi JUCO is a total different animal as far as coaches coming through. I’m excited for [Pearl River] because there will probably be more coaches coming through there in a month than the coaching traffic in my four years of high school at Jackson.”

Callis said he loves living in Jackson but realized Pearl River was the best way to prove to coaches across the nation that he can compete with anyone because he’s on a level playing field.

Callis is not the first player or quarterback to turn down Division-I offers in favor of going to JUCO. Green Bay Packers quarterback Aaron Rodgers and Buffalo Bills 2018 first-round draft pick Josh Allen, who didn’t have any D-I offers out of high school, took the same route.

“Knowing that successful people have gone this route was helpful in my thinking and knowing it’s just not a shot in the dark,” Callis said. “… I think the big thing will be having that semester to gain strength and play with players who are also going to the next level. I think I’ve gained strength and power on my ball just over the summer, so I’m excited for it because I think a lot of change can happen in just this season.”

Callis said he has used this offseason to gain weight by hitting the weight room as well as improve his arm strength and release. He is focusing on these passing skills because he found out what kind of speed he would be throwing to in college.

Callis has had the chance to meet with a lot of his teammates over the last two months and work out with them, most importantly the wide receivers. He described all the players he threw to have the ability to “cut on a dime” and can run “really, really fast.”

Pearl River runs a spread offensive scheme much like Callis played under Jackson head coach Brent Eckley, with the only difference being a tight end on the field instead of a fourth receiver.

Callis said he looks at this as a positive since he will now have another safety net instead of just a running back when he is unable to find an open man down the field.

Tight ends are also taller players who make for an easier target, usually standing anywhere from 6-foot-4 to 6-foot-6 and weighing in the mid 200s.

“Some of the coaches have told me that they recruited two really good tight ends that are coming in,” Callis said. “I haven’t met them in person yet, but I’m excited about that because they had some good tight ends last year, too. Really just being able to find the second guy coming out of the backfield in a big target — it’ll only help, so being able to look downfield, look downfield then dump it off to a guy who is 6-foot-5, 230 [pounds] will be pretty easy.”

Additionally, Callis is excited that he won’t have to worry about getting the ball “right on the spot” because of his new speedy targets.

One thing Callis is taking with him from what he learned in high school from Coach Eckley is to constantly improve himself in whatever he does.

“Going to JUCO I’m on a level playing field with everybody else,” Callis said. “I’m in the best league in all of JUCO, so it’s all really on me if I don’t do well. If I show I can play with those people, I’ll be able to achieve my goal. One big thing for me is to have achievable goals, and I think this is an achievable goal for me.”