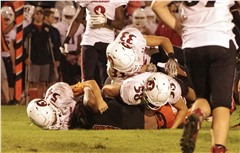 The Jackson football team started eight sophomores against Webster Groves Friday on the road and came away with a 42-7 win.

Seven of these sophomores entered the game as first-year starters with five underclassman on offense and three on defense overall.

“There are guys rolling in and out of there that are sophomores and juniors, and it is what it is, but the kids played hard, so I’m pleased with that. We’ll get better.”

One of those sophomores was running back Daniel Dickerson, who led the game in rushing touchdowns with four scores on 12 carries in his first varsity start.

When the game began, Dickerson said he was a little nervous, but after he scored his first touchdown to give Jackson a 7-0 lead in the first quarter, he was comfortable.

“I was like, “All right, I like this,’” Dickerson said. “Then I just kept pounding away and my o-line gave me opportunities, and I hit the holes and did what I do best.”

This was after Webster Groves turned the ball over on its opening drive when junior running back Jerqon Conners fumbled to allow junior safety Caleb Craft to recover the ball.

The Indians possessed the ball at their 43-yard line, where Dickerson took the field along with first-year starting quarterback sophomore Cael Welker and company.

Welker connected with Dickerson on a screen pass three plays into Jackson’s first possession for a 15-yard play to the Webster Groves 25-yard line.

Senior Jordan Kent, who was wearing No. 2 instead of 19, took Jackson to the 5-yard line on a jet sweep, which paved the way for Dickerson to score his first touchdown of the night.

Both teams failed to reach the endzone for the remainder of the first quarter and for the majority of the second with three minutes, 15 seconds left in the first half.

This is when the Statesmen junior running back Maurion Clemons found paydirt with a 12-yard run on third down after junior quarterback Enrique Quinones was nearly picked off by Craft the play before.

Two of Jackson’s possessions ended on fourth-and-short as the Indians went for runs up the middle but were denied as Dickerson and Welker were stuffed short of the first-down marker.

Before Webster Groves’ only score of the night, the Indians defense was able to make an impressive stop when senior cornerback Jared Wren forced Clemons to fumble the ball at Jackson’s 1-yard line.

Wren came up with the fumble for the Indians offense to take over, but they turned the ball over four plays later as Welker threw his lone interception of the game.

Jackson was able to answer Webster Groves’ touchdown with one of its own on a six-play, 70-yard drive.

The Indians capped off the drive when Welker used a pump fake to trick the defense, after which he was able to find a wide-open receiver in Kent for a 36-yard touchdown with 1:01 left in the first half.

“[Welker] did a really nice job there, and I thought he threw the ball pretty well tonight,” Eckley said. “There were a couple of times where he didn’t throw it well, but for his first start he was pretty impressive.”

Welker finished 16-for-26 with 199 yards, his touchdown pass to Kent and the one interception. He also ran for 19 yards on 11 carries.

On the ensuing kickoff, the Statesmen fumbled the ball and allowed Jackson to recover, which started the key drive the Indians needed to take a 14-point lead.

Welker found sophomore wide receiver Ty Moran for a 23-yard gain to the Webster Groves 8-yard line, allowing Dickerson to score his second touchdown of the night with 20 seconds remaining until halftime.

“That was really key for us — [it gave us] a lot of momentum heading into halftime since we got the separation, and we felt like we could breathe a little bit,” Coach Eckley said. “Those were a couple of critical plays for us where our guys executed.”

Joining Moran as a sophomore starter on offense is Rhet Liley along with second-year starting left tackle Connor Tollison.

Jackson received the football to start the second half as Kent took the kickoff 60-plus yards to the Statesmen 20-yard line.

“I thought that was the longest, most impressive kickoff returns that I’ve ever seen that didn’t score — we thought he ran maybe 200 yards on it,” Coach Eckley said. “It was really impressive — there’s some things he’s going to be able to do for us. We just have to make sure not too grind him down too much and can’t overuse him, but he has to get touches.”

It took six plays for Jackson to score following the kickoff as Dickerson broke off a 10-yard run to give Jackson a 26-7 lead with 10:11 left in the third.

The final score of the quarter came from the leg of senior kicker Matt Jaco, who hit a 31-yard field goal to give the Indians a 29-7 advantage over Webster Groves heading into the final quarter.

The Statesmen were without their starting quarterback Quinones for nearly the entirety of the second half after he went down with an injury.

Webster Groves resulted to a wildcat offense after its quarterback went down, which took the passing game away from the Statesmen, who finished with a total of 173 yards to Jackson’s 391.

Dickerson’s final touchdown of the night came on a 9-yard run with 6:19 left in the game to finish with a total of 67 yards.

This gave Jackson a 36-7 lead as junior running back Seth Waters scored the final touchdown of the night on a 12-yard run. Waters finished behind Dickerson in rushing yards with 44.

The three sophomores on Jackson’s defense are Zane Lawrence-Collier at nose tackle, Randol McDowell at outside linebacker and Bryce Norman at inside linebacker.

McDowell and Norman combined for 25 tackles as Norman led the Indians with 14 and McDowell finished with 11.

The Indians will face Parkway North (0-1) this Friday at The Pit coming off a 26-7 loss to Marquette.

According to Rivals.com, the Vikings have two of the top 15 players in Missouri, and one of them is four-star safety Jalani Williams, who has offers from Alabama, Georgia and Ohio State.