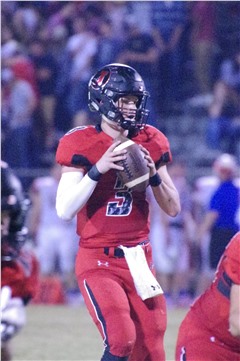 The Indians turned the ball over a total of seven times against the Patriots last season, but did not do so once this year.

Jackson was able to force Marion to turn the ball over three times, two being forced fumbles and one via interception.

The Patriots turned the ball over that many times in large part due to Jackson’s front seven pressuring the quarterback and bringing runners down behind the line of scrimmage.

“It’s not all me — our defensive line really stepped up big tonight,” Laster said. “They filled up some gaps that let me and the other outside linebackers get along the outside.”

Laster also finished 11 tackles, one tackle for a loss and one forced fumble while running the ball for 74 yards and a touchdown on 14 carries.

“Ran tough and played tough on defense,” head coach Brent Eckley said. “He took care of the football, and I’m really proud of him. I don’t know if there were five snaps tonight where he didn’t play, which is a huge night for any player.”

Coming up with the interception was senior Cole Welker, who also had three pass deflections on the night.

Green did not play in last year’s game due to injury, but Coach Brent Eckley knew his players in the box had to play as well as they did to keep the dual-threat quarterback from leading the Patriots to another victory.

“There’s really nothing you can do there to keep him completely bottled up,” Coach Eckley said. “We were just blitzing to be able to get some shots on him where he couldn’t see us. If he sees you coming he can leave you fast, and he really extended a lot of plays.”

Much like Jackson’s offense, Marion runs a spread offense where the quarterback is given run-pass options depending on what he sees from the defense.

Green went 31-for-48 passing the ball for 433 yards, four touchdowns and one interception. He ran the ball 18 times, but only finished with a total of three net yards due to the Indians defense keeping him in check and bringing him down behind the line of scrimmage.

“Defense did an outstanding job,” Coach Eckley said. “They got three turnovers, and they rallied to the ball and had a lot of tackles for a loss. They gave up yards, but kept them out of the endzone pretty well in the second half. That’s really good considering the number of snaps that our defense had to play.”

Senior defensive ends Bailey Beggs and Justin Crane combined for five of Jackson’s 12 sacks while Crane also had two tackles behind the line of scrimmage.

“[The defensive front] just battled. I was really proud of our guys in the box that just battled,” Coach Eckley said. “We got better. Honestly our linebackers did a really nice job tonight as far as blitzing goes and then blitzing and going into coverage. The inside linebackers played real tough, too. Team wise we just improved. We got better.”

No rusher for Marion finished with more than 40  yards rushing, but the Patriots were able to score three touchdowns in that area.

Senior quarterback Cooper Callis knows his team’s defense did not play how they wanted to all night, but he noticed how tough they played even after allowing for Marion to convert on two fourth downs in the fourth quarter.

The Indians were able to stop the Patriots on their third fourth-down try when they were at Jackson’s 18-yard line.

Coach Eckley was pleased with how his secondary finished the game with pass breakups like Jones had.

“[Cole] gets in the flow of the game really well, and he can change up alignments a little bit and bait the quarterback into throwing some things,” Coach Eckley said. “Markiese just keeps coming on and keeps getting better. He struggled a bit early on, but he bounced right back and played tough down the stretch.”

Offensively, Jackson only had possession of the ball for 16 minutes, but managed to out gain Marion with 517 total yards against the Patriots 507.

Callis has completed 70 percent of his passes for 650 yards, 13 touchdowns and has only thrown one interception in these last two games.

Callis credits a lot of his success to how his offensive line, who lost senior left tackle Cade Lattimer, have adjusted to how defenses have been blitzing against them.

“[Marion] brought a lot of blitzes, and we knew that before on Monday when we were game planning for them,” Callis said. “They focused really, really well throughout the week, and I was really proud of them tonight because they picked up almost everything. I didn’t feel much pressure at all the entire night.”

Another big reason for Callis’ success these last two games is because of how confident he is in each of his wide receivers. He said if one receiver is taken away by the defense, then he has no problem throwing it to the next one.

The receiver Callis connected with most of the night was junior wide receiver Jordan Kent, who had 11 catches for 233 yards and four touchdowns against Marion.

Johnson caught Callis’ other two touchdown passes, finishing the game with a total of seven catches and 82 receiving yards.

Jackson had to go to deep routes versus the short pass due to the coverage Marion’s defense showed each play, which changed drastically according to Coach Eckley.

“Cooper did a really nice job of seeing coverage and adjusting throughout the game because they weren’t giving us the same look everytime. They were rolling coverage, and they would come up and play man and blitz. Next time they’d play loose.”