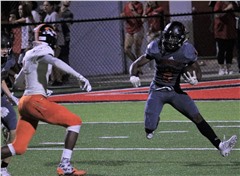 For the fourth-straight year, Jackson’s football team was
able to conquer Cape Central by a score of 35-0 in the 113th game of the
historic crosstown rivalry Friday night at The Pit.

Both teams entered the game undefeated, but the Class 5 No.
4 ranked Indians were without their top two running backs as well as one of
their starting cornerbacks.

Jackson did not slow down, though, as the team was still
able to rush for nearly 300 yards at 291 with senior Seth Waters leading the
charge. He finished with a game-high 214 yards and two touchdowns on 19
attempts, while also throwing for a 57-yard touchdown to junior wide receiver
Rhet Liley in the first half.

Waters moved from being one of the Indians starting slot
receivers to running back after Dickerson and Herring went down against Parkway
North, and he is happy to be carrying the football again.

Waters also said it was an easy transition back to playing
running back because his team’s offensive line, led by all-state junior left
tackle Connor Tollison, were creating “huge” running lanes for him throughout
the game.

“It was fun just to be a running back again — it’s been a
while,” Waters said. “I enjoy it — I always try my hardest at whatever I do. It
seemed like every play they were creating a huge hole, and it was easy on my
part. They did all of the work.”

Another player who helped lead the Indians to record their
second shutout of the season was senior cornerback Markiese Jones, who was on
the other side of the rivalry his freshman year when he played for Cape. Jones
recorded Jackson’s fourth interception of the year while also coming up with
three tackles, one tackle for a loss and one pass deflection against his former
team.

“This game is definitely on a personal level [for me],”
Jones said. “Even though I still have some friends at Cape, we like to compete
with each other. I told them this week it’s not gonna be a friend party — I’m
gonna battle it out. I’m at Jackson now, and it is what it is.”

Besides Jones’ interception, one key play he was able to
make in this shutout was when Cape’s senior quarterback hit senior wide
receiver Donye Taylor for a 64-yard play to get into scoring territory. Taylor
was able to beat Jones on the route, but Markiese stayed with him and tackled
him at his team’s 6-yard line.

Jackson’s defense was able to keep the Tigers from scoring
as senior safety Grant Sides tackled Cox at the 1-yard line on third down.

On fourth-and-1, Cape handed the ball off to senior running
back Tyrus Reddin, who was met by Jackson’s senior inside linebacker Riley Pike
for a loss. Pike finished with three stops behind the line of scrimmage along
with 10 tackles against the Tigers.

“Donye is a good receiver as you can tell,” Jones said. “I
told my team, ‘Hey, I’ve got your back. I’m sorry what happened.’ They had my
back by stopping them at the goal line, and I told them I was going to get [an
interception] in the second half. That’s what I did.”

Cox only threw for 39 yards in the rest of the game while
only completing 33.3% of his passes as Taylor only came up with one more
reception for two yards.

None of Cape’s ball carriers finished with more than 15
yards rushing as senior running back/defensive end DaShawn Franklin ran for a
team-high 14 yards on five carries. Cox ran the ball the most times for Cape
with 10 attempts but only averaged a yard per carry.

Meeting the Tigers’ rushers was none other than all-state
junior outside linebacker Randol McDowell and all-district junior inside
linebacker Bryce Norman, who combined for 33 tackles and six tackles for a
loss.

Norman recorded a game-high 17 tackles with four in Cape’s
backfield, while he also forced Franklin to fumble and recovered the ball on
the same play.

McDowell paced him with 16 stops and two behind the line of
scrimmage along with three rushes on Cox, who ended up being sacked by senior
defensive end Bret Meyer in the second half.

Jackson’s No. 2 running back behind Waters is sophomore
Joshua Wehrenberg, who eclipsed 70 yards and scored a touchdown in Jackson’s
first two games. He carried the ball 12 times against the Tigers for 46 yards
with no score and fumbled in the fourth quarter.

All-state junior quarterback Cael Welker scored the Indians
other two touchdowns against Cape, with both coming on the ground. Welker
finished with 10 carries for 35 yards, while going 12-for-21 with 99 yards, no
touchdowns and two interceptions through the air.

The Indians leading receiver was Liley with five catches for
99 yards and his 57-yard touchdown reception in the second quarter. Behind him
was senior wide receiver Michael Schneider with three grabs for 23 yards,
junior wide receiver Ty Moran with one catch for 15 yards and sophomore wide
receiver Kannen Turley with two catches for 14 yards.

Senior wide receiver Luke Starzinger only came up with one
catch for six yards at his slot position, who entered the game with four
catches for 52 yards and three touchdowns.

Last week’s breakout wide receiver senior Dalton Skrob, who
hauled in six catches for 154 yards and four touchdowns against Parkway North,
did not come up with a catch against Cape.

“I thought we threw [the ball] well early, and I’m
disappointed that we kind of tripped over our own feet offensively,” Jackson
head coach Brent Eckley said. “Cape played hard, though. When it comes down to
it, we’re going to have to improve at the receiver position. We’re going to
have to get better at high pointing balls and getting in the right spot.”

Coach Eckley does not blame Welker for his two interceptions
in the game, with the first one being due to the receiver incorrectly reading
the route and not “sitting down” where he was supposed to. The final
interception came on third-and-long, where Welker heaved the ball and the
receiver was not able to make the play against the Cape defender.