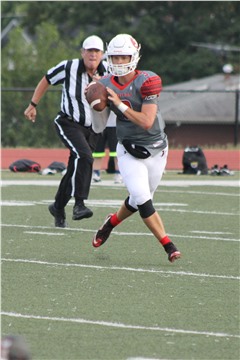 Senior quarterback Cooper Callis of the Jackson football team doesn’t remember the first time he held a football, but he knows it was around three or four-years-old from the pictures of himself playing catch with his dad.

He does however remember when he first started playing, which happened to be in first grade where he joined the Jackson Area Youth Football League.

“I really liked it right away,” Callis said. “Around second and third grade, I started really being one of the more athletic guys in the league then I really started liking it.”

At that age, Callis was playing in every sport he could such as basketball, but he still always felt the need to be throwing a football.

Callis said he played other positions besides quarterback in JAYF such as running back or whatever position he could play where he got the football the most.

It wasn’t till eighth grade when coaches decided he would only play quarterback because they couldn’t risk Callis getting hurt playing elsewhere like on defense.

Heading into Jackson High School, it was always his dream to be the starting quarterback playing under those Friday night lights, but his first year he had to sit and watch.

Most freshman don’t even make it on varsity to stand the sidelines, but Callis did and used his time wisely while watching former Indian Dante Vandeven lead the offense.

“I thought I really improved a lot just from watching him, and I knew that was pivotal because a lot of people freshman and sophomore year when they aren’t on the field they aren’t really paying attention to what’s going on,” Callis said.

Heading into the offseason before his sophomore year, Callis knew he had a chance to take the starting role at quarterback, and so he constantly watched film and worked on his arm strength to prepare to do so.

Before his sophomore season began, Callis learned he had earned the role of starting quarterback, but his dreams of playing at the Pit were put to a halt when he fractured his elbow.

“It was kind of just heartbreaking for me,” Callis said. “I really wanted to play, but I knew God had a reason for it, and maybe something worse could’ve happened if I kept playing.”

Callis easily could’ve just focused on getting healthy and back on the field, but instead he was there for his team whether he was on the field or not. It was just as important to him.

“I could still be a leader to them whenever I wasn’t playing,” Callis said. “When I came back, it was kind of rough just because of injuries and we weren’t at full strength that whole year, so sophomore year was one of the biggest learning curves of my high school career.”

Heading into his junior season injury free, Callis knew he was “the guy,” and got receivers together during the offseason to work on routes and improve chemistry.

Callis also continued to work on arm strength as well as being a vocal leader, especially since it was going to be a special year for Jackson football.

The Indians went 8-3 overall losing in the district championship game, and Callis threw for nearly 3,000 passing yards at 2,947 with 34 touchdowns and 10 interceptions while completing 64.6 percent of his passes.

Following the season, Callis was named the SEMO Conference Offensive Player of the year as well as earned SMAFCA All-Region Offensive MVP.

Callis got the attention of college recruiters in 2016, and currently has offers from four schools: Arkansas State, Dartmouth, Louisiana Tech and Southeast Missouri State.

“I thought I had a good year last year, but I didn’t do the right things at some points,” Callis said. “I didn’t throw the ball away, took sacks that were kind of pivotal in certain moments and I threw some dumb passes that were intercepted. I knew that wasn’t me, but just that first year really getting a full year starting, I learned from it.”

Head coach Brent Eckley thinks Callis can be the best player in southeast Missouri his senior year, and Callis agrees.

Callis is more worried about being the best player in his conference and district so he and his team can reach their ultimate goal of going all the way.

“I gotta be able to make any throw on the field, which I feel like I can do now especially,” Callis said. “As far as being the best player in southeast Missouri, I really just want our team to be a really successful team because I feel like this year we can be. I want to be a key part in that, so that’s really what I’m more excited about.”

Something Callis thinks will really help Jackson be successful is everyone’s attitude when it comes to practice and lifting.

According to Callis, everyone has been on a team where it isn’t fun to play on, but that certainly isn’t the case with these Indians.

“It hasn’t been an awful feeling like, ‘Oh we’ve got to go into lifting today,’ or ‘Oh, we’ve got practice today,’” Callis said. “This year it’s really just been fun.

“I think for everybody on the team that we have, it’s just been fun to go to practice every day and everybody looks forward to going to practice and lifting. We just have a brotherhood on the team, and I enjoy this team as much or more than any other team I’ve been on.”

The attention from college football teams has been a motivating factor for Callis this offseason.

Coach Eckley said Callis has gained around 20 to 30 pounds this offseason from last year, and Callis knows he needs to continue to gain weight to be able to play at the college ranks.

“Just having that in the back of my mind — it really helps push me I think,” Callis said. “I’m getting more reps and pushing more weight in the weight room than I would if I wasn’t really concentrating on the lift.”

Callis said he doesn’t want his lack of effort to effect what college coaches think of him because when it comes to getting stronger and gaining weight, he controls it.

Callis contributes his ability to gaining weight and improving on his lifts all to Coach Eckley. He also credits Eckley with having such a high football IQ, and doesn’t think he would be where he is now without him.

“[Coach Eckley has] really just improved my game so much to where five, six years ago there’s no way I would’ve thought I would be where I am today,” Callis said. “With how smart he is offensively and just how intelligent he is with the game of football has just helped me tremendously.”

At last Friday’s Jamboree in Festus, Jackson had the chance to play SEMO Conference opponent, Farmington.
On one play when Callis and the offense were on the field, the ball was snapped into the dirt and slid to him instead of going right into his hands.

Callis picked up the ball, and with a defender just feet away from him, he got into throwing motion and found a wide-open receiver in junior Jordan Kent for a 20-plus yard pass near the endzone.

“I think a lot of that just comes with experience,” Callis said. “Knowing just in the back of my head, like, not even having to think about how much time I have for pressure to get in and how much time I’m allowed to throw it.”