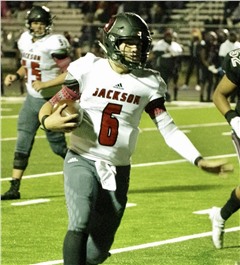 For the first time since Week 5  on Sept. 25, the Class 5 No. 3 ranked Jackson football team played on the road and faced Class 3 unranked Cardinal Ritter this past Friday night at the Lion’s Den in St. Louis.

The Indians (8-0) were able to walk away with a 24-point, 56-32 win over the Lions (0-2) in a game that featured a total of 1,149 yards of offense combined from both teams. Both quarterbacks amassed over 300 yards passing as four other players finished with more than 100 all-purpose yards.

Jackson’s senior quarterback Cael Welker scored a game-high three rushing touchdowns along with 92 yards on the ground off 16 carries. Throwing the ball, Welker went 25-for-38 (65.7 completion percentage) for 310 yards and one touchdown with no interceptions, which he still hasn’t thrown all season.

Even though Jackson’s offensive line paved the way for nearly 700 yards of offense, the unit still allowed Welker to be sacked two times by freshman defensive end Terry Gayden. However, Welker was still able to elude pressure most of the night and find open receivers outside of the pocket.

Gaining the most yards from scrimmage outside of Welker for the Indians was none other than junior wide receiver Kannen Turley, who hauled in 180 receiving yards off 12 catches. Turley also ran for 62 yards and two touchdowns on just four carries.

Finishing second in receiving behind Turley for Jackson was senior tight end Rhet Liley as he finished with 51 yards and one touchdown on four receptions.

Leading the Indians rushing attack was sophomore running back Tony Williams as he broke out for a game-high 107 yards and two touchdowns on 24 attempts. Pacing him in the backfield was senior running back Daniel Dickerson, who carried the ball 12 times for 62 rushing yards.

All but 41 of Cardinal Ritter’s 492 yards on offense came through the air as the Lions senior quarterback Tyjuan Atkins completed 18 of his 36 passing attempts (50%) for 451 yards and four touchdowns with one interception. Atkins’ top option was junior wide receiver Luther Burden, who finished with a game-high 263 receiving yards and four touchdowns on eight catches.

Burden is the No. 9 ranked player in the nation for the Class of 2022 according to Rivals.com, and he has already verbally committed to continue his playing career at Oklahoma. Burden also fielded offers from Alabama, Ohio State and LSU.

One of the reasons why Burden was able to have so much success against the Indians defense was due to Cardinal Ritter lining him up at different receiver spots throughout the game. This made it difficult for Jackson’s defense to try and cover Burden with two defenders as the team’s secondary was also without junior cornerback Blake Blackman for most of the night.

Other top receivers for the Lions were senior wideouts Amarhyrious Edwards and Keavian Long, who combined for seven catches and 182 yards behind Burden.

Two other defenders to record turnovers for the Indians were senior outside linebacker Randol McDowell and junior safety Flint Guilliams as they both recovered fumbles. McDowell also finished with eight tackles, three tackles for a loss and one rush on Atkins.

Cardinal Ritter was forced to be so one dimensional on offense because it was without its starting running back in senior Bill Jackson, who is now finished serving a two-game suspension. Jackson was suspended for the first two games of this season after failing to serve a one-game suspension at the beginning of last season.

Jackson played under a different name and number, which cost Cardinal Ritter its 2019 season as the Lions were 7-0 before they had to forfeit the rest of the year. The Lions coaching staff and athletic director were terminated.

On Rivals.com, Jackson is ranked as the 14th best player in Missouri for the Class of 2021 and has verbally committed to Tulsa. Indians senior left tackle and Mizzou commit Connor Tollison is in the top 20 with Jackson at 17.

Jackson now has one more game left in the regular season as it will travel to Columbia and face Class 6 Hickman (2-5). The Kewpies have lost three games in a row heading into the contest.