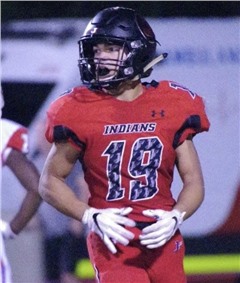 The Jackson football team, led by seventh-year head coach Brent Eckley, will play in its annual Gatorade Game this Saturday at the newly renovated stadium, The Pit.

Renovations include the addition of an artificial turf field and two new scoreboards, with one featuring a video board as well as a sound system.

This year’s Indians will look different as well after losing a combined 13 starters, six on offense and seven on defense, to graduation.

Three of those graduates were Class 5 All-State honorees in quarterback Cooper Callis, center Owen Leible and inside linebacker Nathan Brown.

This has left plenty of positions up for grabs over the offseason, which Eckley said has produced a lot of competition. He also said there are a number of players who played in those spots last season but did not start, who have now stepped into those starting roles.

To replace Callis at quarterback, who threw for a career-high 3,807 yards and 56 touchdowns in 2017, Eckley has rotated four players at the position.

Coach Eckley said he and his staff have yet to settle on naming a starting quarterback, but he said once practice begins he will narrow it down to fewer players vying for the role.

The lone upperclassman competing for the job is junior Jake Smith, who was the primary starter at quarterback for the junior varsity squad.

The other three who have rotated in at quarterback are sophomores Rhett Liley, Thomas Ruch and Cael Welker.

Coach Eckley described Liley as a big, physical player who can run the ball well. He said Ruch is able to throw the ball as well or better than anyone.

Welker took several snaps on varsity when he rotated in for Callis whenever Jackson took an insurmountable lead last season.

“Cael Welker has done a really nice job this summer of making good decisions and has been pretty athletic when we’ve been doing team camp stuff as far as making reads and making somebody miss,” Coach Eckley said.

Something Eckley has discussed with the quarterbacks is that it is their job to cover other player’s mistakes. An example of that would be if there was a bad snap from the center, the quarterback must still make the play go.

The other thing Coach Eckley wants to see is something Callis thrived off of, which is making pre-snap decisions.

Eckley wants his quarterbacks to recognize what scheme the defense is in and if the unit is giving the offense an advantage.

Another key area for these quarterbacks this offseason has been ball security since they are the player touching the ball every single snap besides the center.

These are the things Eckley and the rest of the staff will be grading these quarterbacks on to determine a starter. Going into the Gatorade Game, Eckley believes the battle could still be taking place.

Whoever becomes the starting quarterback will also be handing off to a first-year starter at running back.

Last year’s starter, Laster, recorded 1,366 yards and 11 touchdowns on 177 carries while catching the ball 27 times for 522 yards and seven scores.

The returning running back with the most carries is junior Seth Waters, who had 17 rushes for 62 yards and three touchdowns in 2017.

Waters will play a much more significant role in this year’s offense as he will see time at running back but will also split out to wide receiver.

“Because [Waters] is such a smart kid and runs great routes, he might also give us some depth at receiver,” Eckley said. “He’s kind of a hybrid type player for us. I don’t know if he’ll be an every-down back, but he’ll know everything at running back and he can win versus linebackers on routes.”

Three players are competing for the primary running back job as sophomores Demichi Herring and Daniel Dickerson and junior Luke Starzinger have all been in the mix.

One of the key focuses for these players, especially Herring and Dickerson, who primarily carried the ball on the freshman squad, is ball security.

This is because runs Herring and Dickerson made playing on Mondays could get them in trouble if they tried to handle the ball the same way on Friday nights.

The only returning starter at a skilled position is 2017 Class 5 All-State senior wide receiver Jordan Kent, who led the team in receiving with 1,307 yards and 24 touchdowns off 81 catches.

Kent, who Eckley has described as his most athletic player the past few seasons, was also one of Jackson’s leading receivers in 2016 with 45 catches, 786 yards and 13 touchdowns.

“We feel like whatever we try to do with [Kent] — that’s going to be a win,” Coach Eckley said. “If we can control the things around him so that he gets a one-on-one he’s going to win. We just have to get the ball to him.”

Kent also ran the ball 25 times for 186 yards with no score last year, but he found the endzone three times while running the ball in 2016 and 170 yards on 15 carries.

Eckley said he will attempt to get Kent twice as many touches this season but that it will be a difficult challenge since opposing teams know Jackson’s offense will be trying to do so.

“We’ll have to be creative to try to do that, but [Kent] is such a special talent,” Eckley said. “He is considerably better than what he was last fall athletically. He’s heavier, he’s faster, he’s more explosive and he’s stronger.”

When talking to his young quarterbacks, Coach Eckley said when he is having them look for pre-snap opportunities they also need to try and find out where Kent is going to be.

Joining Kent in the receiving corps this season will be junior Dalton Skrob, who was a starter on the junior varsity team and has had a “really nice” offseason, according to Eckley.

At outside receiver, sophomore Ty Moran will likely fill one of the starting roles. Seeing time at the opposite receiver spot has been senior Tristan Koenig while Liley has as well.

Jackson’s offensive line returns four of its five starters including sophomore Connor Tollison, who now weighs 249 pounds after weighing 205 last year. Tollison took over the left tackle spot when Cade Lattimer went down with an injury in the season opener.

The three other returning starters include senior guards Braxton Green (280 pounds) and Kevin Crites (235) while senior Dawson Southard (200) is moving to center from right tackle.

Taking over right tackle for Southard will most likely be junior Nathan Harrison, who weighs around 225 pounds.

Defensively, Jackson lost one of its top tacklers from the past two seasons in Nathan Brown, who recorded a team-high 196 tackles last year.

Eckley said he is pleased with where the unit is depth wise while also claiming their pursuit is already better than what it was last year.

Replacing Brown and Justin Laurentius at inside linebacker will be junior Riley Pike and sophomore Bryce Norman.

Jackson only returns one of its starting defensive lineman in junior Cole Amelunke, who recorded 72 tackles and five tackles for a loss while rotating between nose tackle and defensive end.

Eckley said the staff is hoping for a big year from the defensive line once again as senior Justin Singleton and junior Brett Meyer will each rotate at end.

Seeing time at nose tackle will be sophomore Zane Collier, who weighs around 270 pounds and is a physical player with good tools, Eckley said.

At outside linebacker, where Laster and Starzinger combined for 139 tackles and 11 sacks last year, there has been four players rotating at the position.

Aside from Starzinger it has been Koenig, Dickerson and sophomore Randol Mc-Dowell setting the edge for the Indians.

The defensive backfield lost its top cornerback from the last two seasons in Cole Welker, who recorded a combined 14 interceptions (10 in 2017) during the span.

Coach Eckley has been pleased with the play of senior Matt Jaco and junior Caleb Craft at safety, while junior Markiese Jones and senior Jared Wren hope to lock the cornerback spots. Waters and Herring have also played well at the cornerback position over the summer.