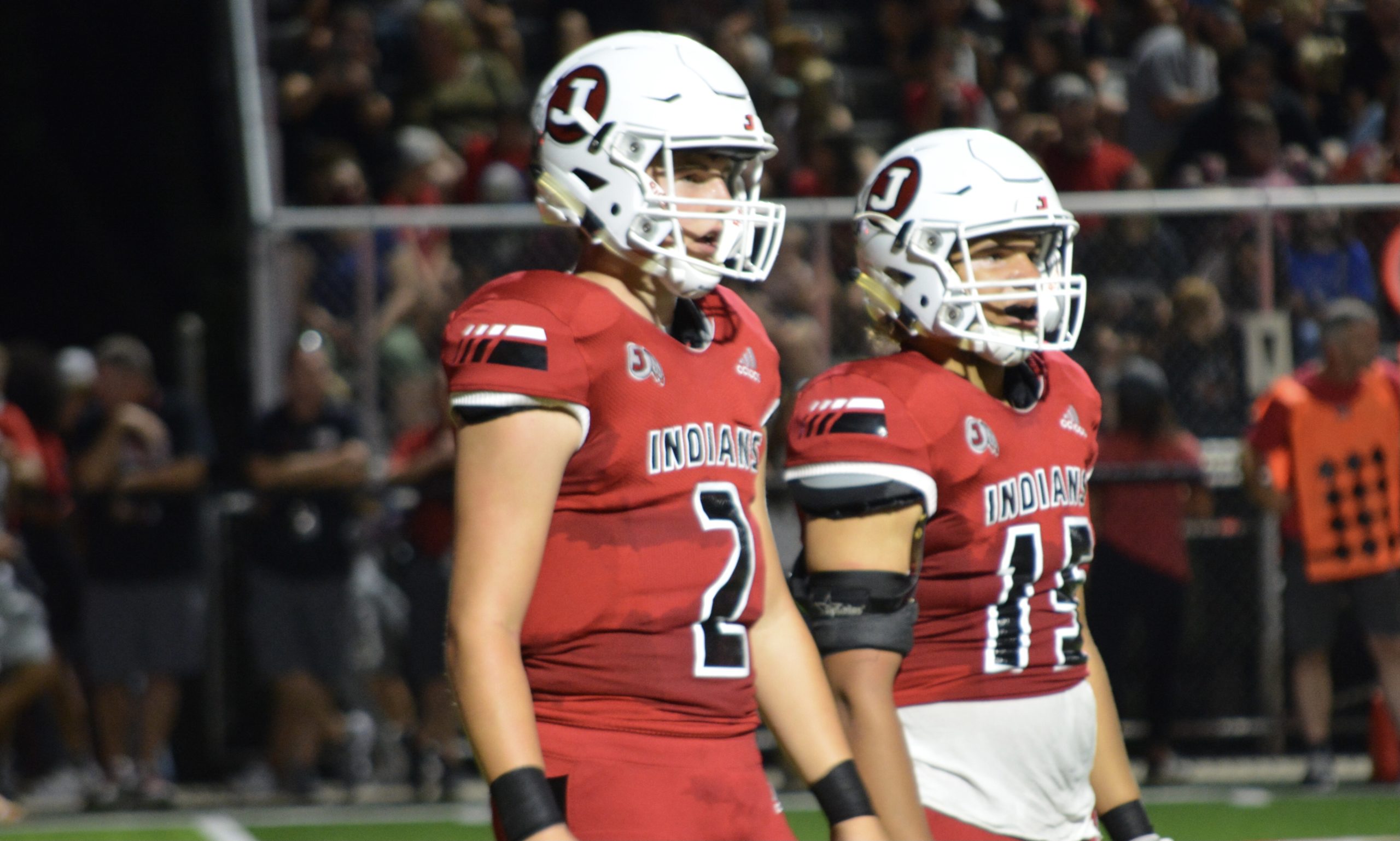 Senior quarterback Cameron Marchi (left) accounted for five of Jackson’s eight touchdowns in a 59-7 win over Mehlville in the Class 5 District 1 semifinals Friday night at The Pit. Photo by Jay Forness

Last Friday night after receiving a bye week, a well-rested Jackson football team took no time proving why it is the clear-cut favorite to win yet another Class 5 District 1 Championship this week.

The reigning Class 5 State Champion Indians have, in fact, won three district titles in a row, and it only took them two quarters to qualify for a running clock in the second half and amass 50-plus points against Mehlville.

Jackson was led by none other than its starting quarterback senior Cameron Marchi, who scored five of his team’s seven touchdowns in the first half. Marchi had three through the air while only missing one pass (13-of-14; 92.8 completion percentage) and scored twice on the ground off three carries.

“It was nice that we were able to be efficient throwing the ball. You get in a game where it’s not really that fair when you get up 42-0 and it’s still pretty early. You still want to do what you want to do because the kid has practiced to perform all week.”

Marchi only netted 171 yards, though, with 156 of them being passing. This was because Marchi’s defense allowed him to start most of his possessions on Mehlville’s side of the field.

Jackson forced Mehlville’s offense into a total of nine three-and-outs while coming up with a total of two turnovers. One of those turnovers came on the Panthers first possession as Indians sophomore nose tackle Reid Landers stripped the ball away from senior running back Eric Ohmer.

Ohmer, who fields offers to play college football from Culver-Stockton, Missouri S&T and William Jewell, carried the ball more than any other play in the game with a total of 17 rushes. He only finished with 22 total yards for an average of 1.3 yards per carry.

Jackson senior safety Flint Guilliams came up with the fumble recovery, which the Indians offense turned into a touchdown three plays later with a 5-yard run for the score by Marchi.

Coming up with Jackson’s other forced turnover was made by senior cornerback Blake Blackman as he picked off Mehlville senior quarterback Josh Everding in the second quarter.

Everding failed to complete any of his seven attempts as the only yards he gained (10) came from his one rushing attempt.

On top of his interception, Blackman made a game-high three tackles for a loss and had four total stops in all. Also having multiple tackles in the backfield were defenders like Guilliams, Landers, senior defensive tackle Mark Brakhane, senior inside linebacker Jacob Farrow, senior outside linebacker Ryley Styer and junior defensive end Tony Terry.

“I thought our defense played super physical after that first drive. When you get a team that’s one dimensional, it makes it tough for them,” Coach Eckley said. “We get some three-and-outs and get a short field after kicking a touchback, it’s down hill from there.”

Marchi was not the only player for Jackson’s offense to record multiple touchdowns as senior running back Joshua Wehrenberg scored twice on the ground on top of leading the game in rushing with 81 yards on 11 attempts.

Jackson’s starting running back junior Tony Williams only carried the ball eight times for 60 yards and a touchdown, while the team’s third-string back freshman Zach Zimmerman had seven attempts for 25 yards.

Leading the Indians in receiving was senior wideout Kannen Turley as he hauled in five passes for 75 yards and a touchdown, while junior wide receiver Chase Fischer paced him with 30 yards off three catches. Also recording touchdown receptions were wide receivers junior Isaiah Davis and sophomore Blayne Harris.

“I’m really pleased with it and not a bit surprised [Harris came up with a touchdown]. We’ve been plugging along with him, and he’s done a fantastic job for us all season long,” Coach Eckley said. “He’s been ready, and he’s done a really good job staying ready. He had a great week at practice, and he played some safety for us as well. He’s pretty valuable for us as a sophomore.”

Also scoring points in the game for the second-straight contest was senior kicker Logan Bruns, who made a 28-yard field goal in the final minute of the second quarter. During the Indians season finale, Bruns became the fifth kicker in Missouri high school football history to score 200 career points.

“We’re very proud of him. He is an outstanding kicker — an elite kicker at the high-school level,” Coach Eckley said. “We think he can go as far as he wants because he’s continuing to improve. He’s probably 90% plus kicking touchbacks even on a cold night like tonight. I’m very happy for him that he has a spot in the record books — that’s a big deal.”

No. 1 seed Jackson (10-0) will face off against No. 2 Seckman (9-2) for the Class 5 District 1 Championship Friday night at The Pit. The Jaguars are coming off a 35-34 win over No. 3 Poplar Bluff, which was the same team that scored the most points on the Indians this season at 32 in Week 3.

Seckman has one of the top rushers in the state as its quarterback junior Cole Ruble has run for 2,386 yards and 29 touchdowns on 256 carries through 11 games this season (216.9 yards per game). However, Ruble and the Jaguars only put up 25 points on the same 2-7 Cape Central team Jackson handled 48-0.