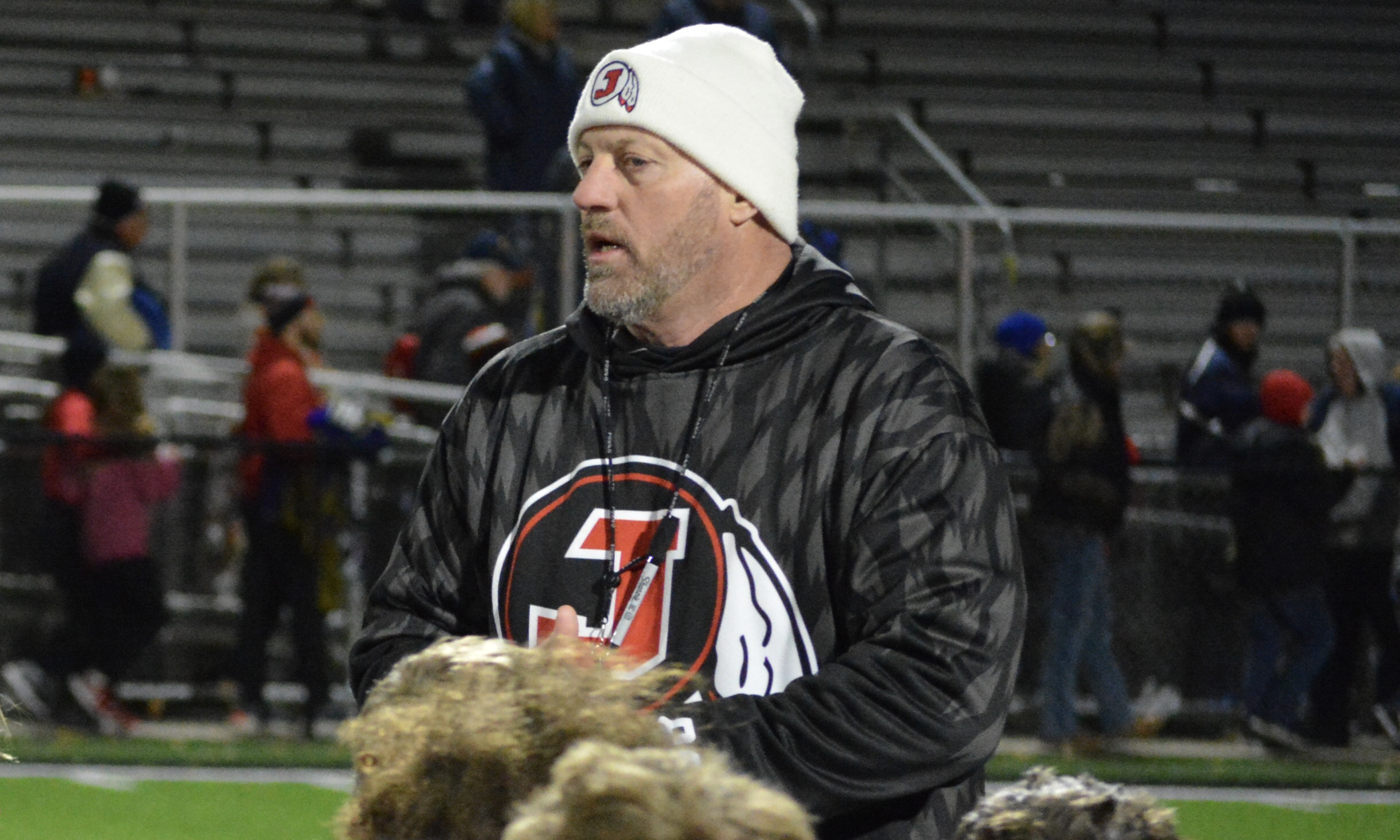 Last week, Jackson officially announced that the football team’s 11-year head coach Brent Eckley will be retiring at the end of the school year. Photo by Jay Forness

Last week was the end of an era for one of the most dominant football programs in Missouri over the last several seasons as Jackson’s 11-year head coach Brent Eckley officially announced his retirement.

This came two years after the Indians won their first-ever state championship in 2020 with Eckley at the helm. Jackson had also been Class 5 state finalists the year before and reached the state semifinals last season.

Eckley finished with an overall coaching record of 102-27 through his 11 years with the Indians. Last month, Brent was inducted into the Missouri Football Coaches Association Hall of Fame after being named the 2020 Class 5 Coach of the Year and finished as a seven-time SEMO Conference Coach of the Year.

Following his retirement from Jackson at the end of the school year, Eckley will move to Springdale, Arkansas, where he will take over as the new head coach at Har-Ber High School.

“It was not an easy decision to retire — my heart is still at Jackson, so it’s tough,” Eckley said. “Fifteen to 20 years ago, I would’ve visited schools in Arkansas and other southern states to see how football was there.

“I thought I was just going to stay in Jackson, retire here and maybe be able to coach here after I retired. This opportunity fell in my lap and it’s a situation I never thought I would have.”

What Eckley is excited for the most about taking over at Har-Ber is that he will be essentially rebuilding the program much like he did here at Jackson. Har-Ber combined for a record of 4-18 the last two seasons as the Indians were 5-15 the two years before Eckley took over back in 2012.

“Having an opportunity to build a program is the fun part — maintaining is not quite as fun and exciting,” Eckley joked. “You try to build, gain, scratch and claw your way to the top.

Before this fall since 2018, Jackson compiled an overall record of 50-3 through four seasons while collecting one state title, four Class 5 District 1 Championships and four SEMO North Conference titles.

The Indians were able to win a fifth-straight conference championship this fall, but they failed to reach the district title game for the first time since 2015. No other football program in Southeast Missouri has ever won four or even five-straight conference titles till Jackson did so under Coach Eckley.

“It’s never a bad day [at Jackson] — there was always something good or fun everyday with work or preparation,” Eckley said. “There’s a lot of things I probably could’ve done a lot better and there are some things that really stick out that were good.

“Everybody would point to the state championship season first — it was a special season with a special group of kids — but we had a lot of other really good teams in there. I’m happy for the relationships that we were able to build and had amongst coaches and the players as they went through the program. That’s something we’re certainly proud of.”

Along with coaching and mentored countless Jackson students over the years, Eckley also made quite the impact on the community, which showed every Friday night whether the Indians were home at The Pit or on the road. Jackson would often have more fans at big-time playoff games, like when the Indians traveled to Kansas City in 2019.

“I feel very fortunate to have coached here because I feel like Jackson probably treated me better than I deserved,” Eckley said. “I’ve said all along that it’s a special place and that it’s the best place to coach football in the state of Missouri.

“Even though people would’ve rather had me stay here, they’ve still been so supportive and encouraging. It doesn’t surprise me a bit all — the people who have wished me well because the people have been really outstanding the whole time I’ve been here.”

Another thing Eckley enjoyed about being at Jackson is the generational talent he’s been able to coach through the years, like 2020 state champions Cael Welker, Bryce Norman and Randol McDowell to name a few who all had family members that were also Indians.

Outside of winning that state title, which was also the first of Eckley’s career, a memory that sticks out to him was when he first coached in the Cape-Jackson rivalry game. It was a back-and-forth contest the Indians eventually won right at the end of the game.

“It was like 29-26 or something like that, but it was kind of a big deal and a statement type game for our program,” Eckley said. “… When I first came here, the kids had no reason to buy-in to what I was selling. That first group of seniors went 7-3 and the reason we had success is because of their commitment. That was a big deal and set the standard for the willingness to work.”

Eckley explained the key to Jackson’s success has indeed been the preparation by his players, describing it as second to none because of their dedication to the program. Brent also bragged on the numerous coaches who have been on his staff throughout the past 11 years.

“They really set the standards for kids, and I can always count on my coaches to show up and work. The kids know that’s an expectation, so it’s much easier for the kids to fall in line when the coaches are all there.”

While Friday nights at The Pit will always hold a special place in Brent Eckley’s heart, that’s not the only thing he’s going to miss about coaching at Jackson.

“My response to that would be, ‘Everything,’” Eckley said. “There’s so many thing that we’ve been able to do and implement that I think make it special. I loved everything about it.”