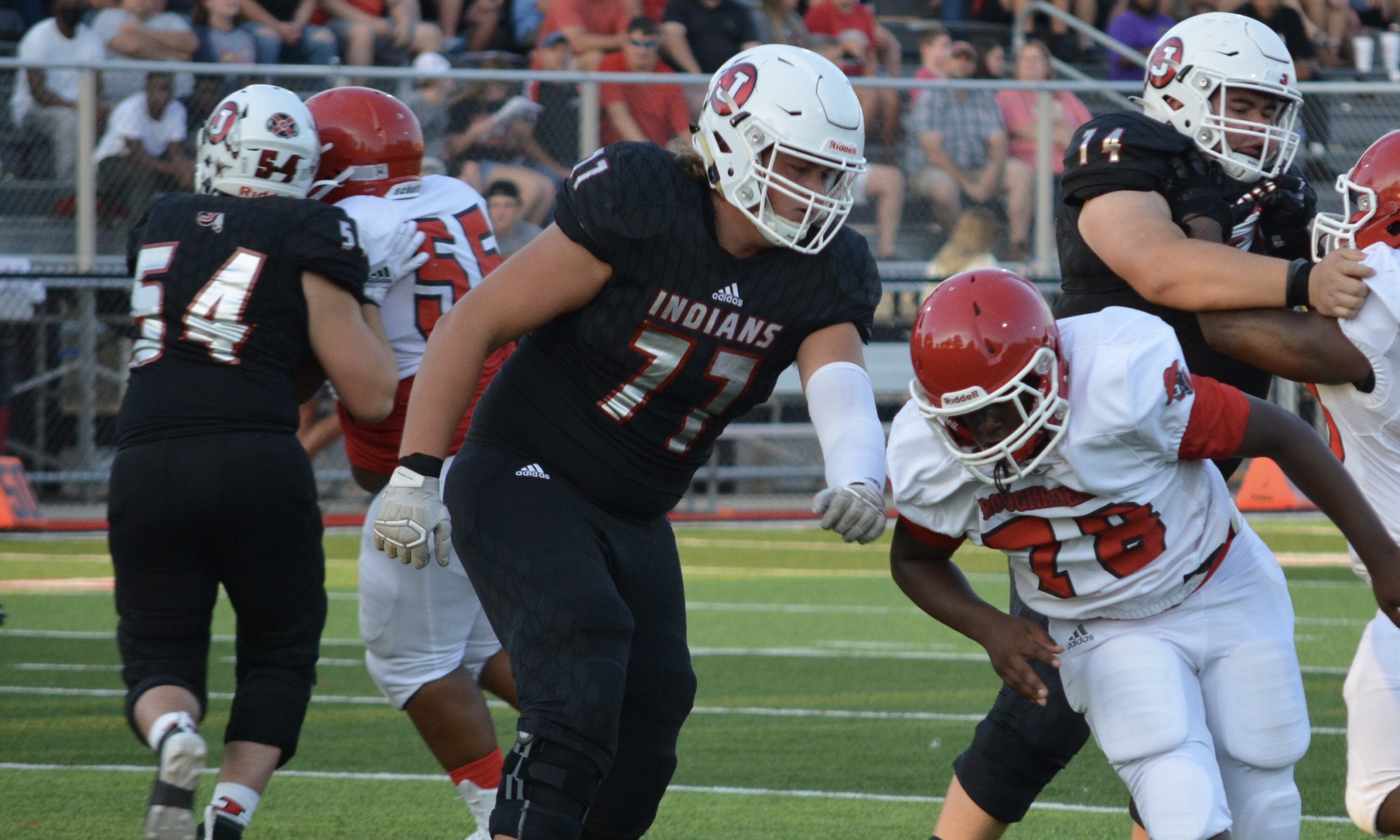 Despite the Jackson football team not making what would have been a historic, third-straight trip to the Class 5 State Championship game, the Indians had seven players named all-state by the Missouri Football Coaches Association.

Jackson (12-1) had five offensive, two defensive and one special teams player represented throughout the first, second and third all-state teams as four of these Indians became multiple-time all-state honorees.

This came after a season where the Indians reached the state semifinals for the third year in a row, but they lost to eventual state champions Webb City 35-21. On top of that, Jackson brought home a fourth-straight Class 5 District 1 and SEMO North Conference Championship.

Being selected first team all-state for the Indians were senior kicker Logan Bruns, senior left tackle Ashton Flinn and senior wide receiver Kannen Turley. This was the second-consecutive year Bruns, Flinn and Turley were named to the first team.

Flinn, who is currently the only Division-I commit (Murray State) for Jackson, ends his career as a three-time all-state selection since he was put on the second team after his sophomore year.

With an offensive line led by Flinn, the Indians had six players rush for more than 100 yards as junior running back Tony Williams eclipsed 1,000 (1,009) and scored 16 touchdowns on 156 carries. Jackson also had much success through the air due to a player like Flinn on the offensive line as senior quarterback Cameron Marchi threw for 2,693 yards and 40 touchdowns, while only having thrown four interceptions on 243 attempts (69.1 completion percentage).

To earn his second first team all-state nod, Bruns finished as the Indians fourth-leading scorer with 86 total points off 71 extra points, three successful field-goal attempts and an offensive touchdown he scored at wide receiver. Bruns etched his name in the MSHSAA record book by becoming the all-time leader in points after touchdowns (219) and is also a top-five, all-time scorer.

Even though Turley didn’t haul in the most receiving touchdowns for Jackson in his final season of high school football, Kannen was the Indians overall leading receiver with 61 catches, 1,268 yards and 16 touchdown catches. Recording a team-high 20 touchdown grabs for Jackson was junior wide receiver Isaiah Davis, who didn’t earn all-state honors after doing so along with having 52 catches for 914 yards.

As for Marchi, he was one of the two Jackson players named second team all-state in his first and final year as the Indians starting quarterback. Being selected as the Class 5 First Team All-State quarterback ahead of Marchi was Wentzville Holt senior Cooper Brown.

The last player for Jackson to earn all-state multiple times along with Bruns, Flinn and Turley was senior safety Flint Guilliams, who was named second team all-state with Marchi. Guilliams wracked up 77 tackles, eight tackles for a loss, three interceptions (tied for team-high) and two pass deflections. He also finished with the most points on Jackson’s defense at 12 and the fourth-most all-purpose yards with 630 (297 punt return, 263 kick return and 74 interception return yards).

The final two all-state selections for the Indians were senior right guard Liam Bryant and senior outside linebacker Ryley Styer as they were each put on the third team. Bryant, who was a three-year starter for Jackson, helped solidify the right side of the Indians offensive line with senior right tackle Tanner Raines.

As for Styer, he finished as Jackson’s leader in tackles for a loss with 19 along with 80 total stops, five pass breakups, three blocked kicks, two sacks, two fumble recoveries and forced one fumble. He also scored a defensive touchdown in his final season with the Indians.

Guilliams and Styer helped Jackson’s defense record three shutouts this year while only allowing more than 10 points once during the regular season. Only two teams scored more than two touchdowns against Jackson this past fall, which was Poplar Bluff (32 points) and Webb City (35).

Including its seven all-staters, Jackson will graduate 16 players from this team.

“I’m super proud of this team, and the seniors are a really, really special group with all the time they’ve put in and the work they’ve done,” Jackson head coach Brent Eckley said. “Their leadership — they’ve just been a really special group. It’s been a great ride with these seniors, and this whole season has been a really fun one. We’re definitely going to miss them that’s for sure.”