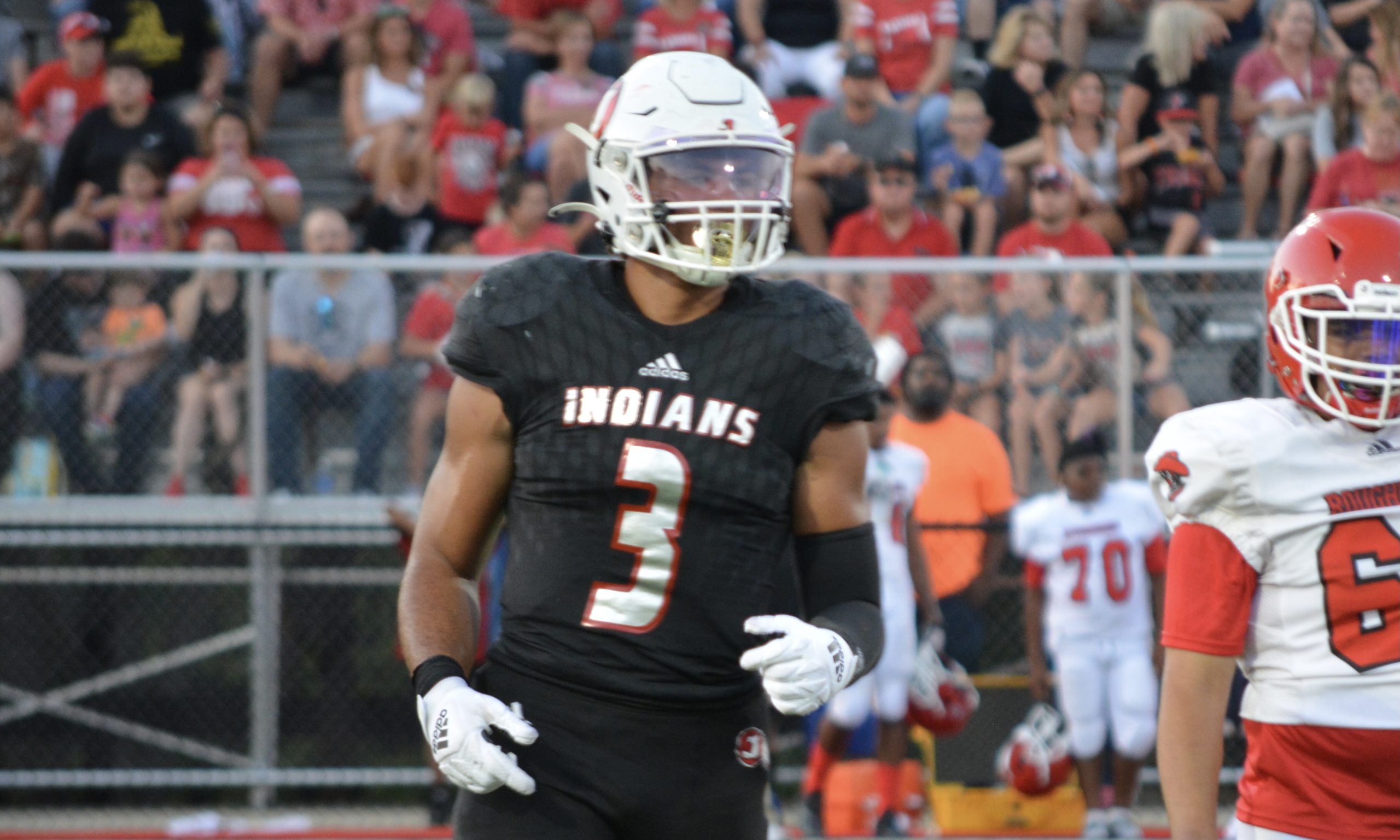 For the first time this fall, the No. 1 ranked team in Class 5 finally faced another top-10 ranked opponent in Missouri as Jackson football hosted Class 3 No. 8 Cardinal Ritter Friday at The Pit.

The Lions entered the matchup at 3-2 overall having suffered losses to Joilet Catholic Academy (Illinois) 30-20 in Week 2, and then to undefeated Class 4 No. 6 Lincoln College Prep 28-20 two weeks after.

Unshockingly, Cardinal Ritter suffered its third loss of the season to the undefeated Indians (6-0) as Jackson outscored the Lions 42-0 until the final two minutes of play. The Indians defense forced a total of four turnovers as they made three interceptions and forced one fumble on a sack, which was scooped up for a score.

Recovering the fumble made by Jackson junior defensive end Tony Terry for his first touchdown of the season was senior outside linebacker Ryley Styer, who took the ball 38 yards for the Indians final score of the night with 10 minutes, 20 seconds left in the game.

Terry’s fumble came on a sack of sophomore quarterback Antwon McKay, who was intercepted once in the game while only completing six of his 17 passes for 109 yards and one touchdown.

This was Terry’s second sack of the game as he also brought down the team’s initial starting quarterback senior Pernell Beasley, who was taken out of the game as he finished with two interceptions on 11 attempts with five completions for 68 yards.

Coming up with interceptions for Jackson were defenders like senior corner-back Blake Blackman and sophomore safety Gavin Guilliams, while senior inside linebacker Jacob Farrow recorded one as well on a high-effort play.

Only one Indian recorded double-digit tackles as it was Jackson’s only returning all-state defender in senior safety Flint Guilliams, who made 10 stops while also breaking up one passing attempt. Farrow paced Flint with nine stops of his own along with two in the backfield, while senior defensive end Mark Brakhane and junior inside linebacker Griffin Horman each came up with eight tackles.

“I’m very pleased defensively. [Cardinal Ritter’s offense] finished with 225 yards total after that 63-yard play, so I thought we played pretty well defensively,” Jackson head coach Brent Eckley said. “They had 52 snaps — we held them under 50% completion and had three interceptions. We allowed only two yards per rush, so defensively I was really pleased.”

Cardinal Ritter’s receiving duo was no match for the Indians top-two receivers, though, as wideouts senior Kannen Turley and junior Isaiah Davis combined for 181 yards and two touchdowns on 12 catches.

Along with his five catches for 75 yards and multiple receiving touchdowns, Davis also scored on the ground with one carry, which means he found the endzone 50% of the time he touched the ball. All three of Isaiah’s scores came in the first half for Jackson to take a 21-0 lead over the Lions.

Besides his natural play-making ability, one of the reasons why Davis was able to produce a hat trick is because Cardinal Ritter’s defense decided to lean heavily toward defending Turley instead of him. After Davis started making plays, this forced the Lions to ease up on Turley, which allowed him to haul in seven passes for a game-high 106 receiving yards.

“That’s awesome for us because now teams are going to have to think about, ‘Do I tilt this way, or do I want to tilt that way,’” Coach Eckley said. “I’m pleased with how our receivers continue to grow. … [Davis] has had the ability to make those plays, and he’s worked hard and understands the offense — he’s a bright kid.”

Jackson’s senior quarterback Cameron Marchi, who picked up an offer from Culver-Stockton (NAIA) last week, finished with a completion percentage of 71.4% on 21 attempts for 191 yards and no interceptions.

Marchi felt plenty of pressure throughout the first half from the Lions and was hit numerous times after getting the pass off, but this never deterred him or impacted his play. He also found paydirt on the ground with a 2-yard run at the beginning of the second half.

“[Marchi] made a lot of good plays. When he’s throwing the ball down the sideline, we’re stretching it a little bit and it’s like we’re not giving ourselves a chance, but he’s also not turning the ball,” Coach Eckley said. “We went another game on offense without turning it over and that’s critical to our success. If we can take care of the football, we have a great chance to win.”

Coach Eckley said he and his staff challenged the offensive line in the second half, which is led by Murray State commit and senior left tackle Ashton Flinn.

“We talked about at halftime challenging the offensive line, and I thought they did a really nice job in the third quarter of coming off the football and covering guys up,” Coach Eckley said. “… We have to maintain our blocks and keep our feet moving versus physical athletes like we saw against Cardinal Ritter.”

Leading Jackson’s rushing attack was none other than junior running back Tony Williams, who finished with 107 yards and one touchdown on 17 carries. Pacing him was senior running back Joshua Wehrenberg with nine rushes and 47 total yards as Marchi was third at 23.

Next up for the Indians is SEMO North Conference opponent Class 4 Farmington (5-1, 3-0 SEMO) at Haile Memorial Stadium. This will be for the conference championship as the Knights were able to defeat Poplar Bluff (4-2, 1-2) 49-42 last week at home.