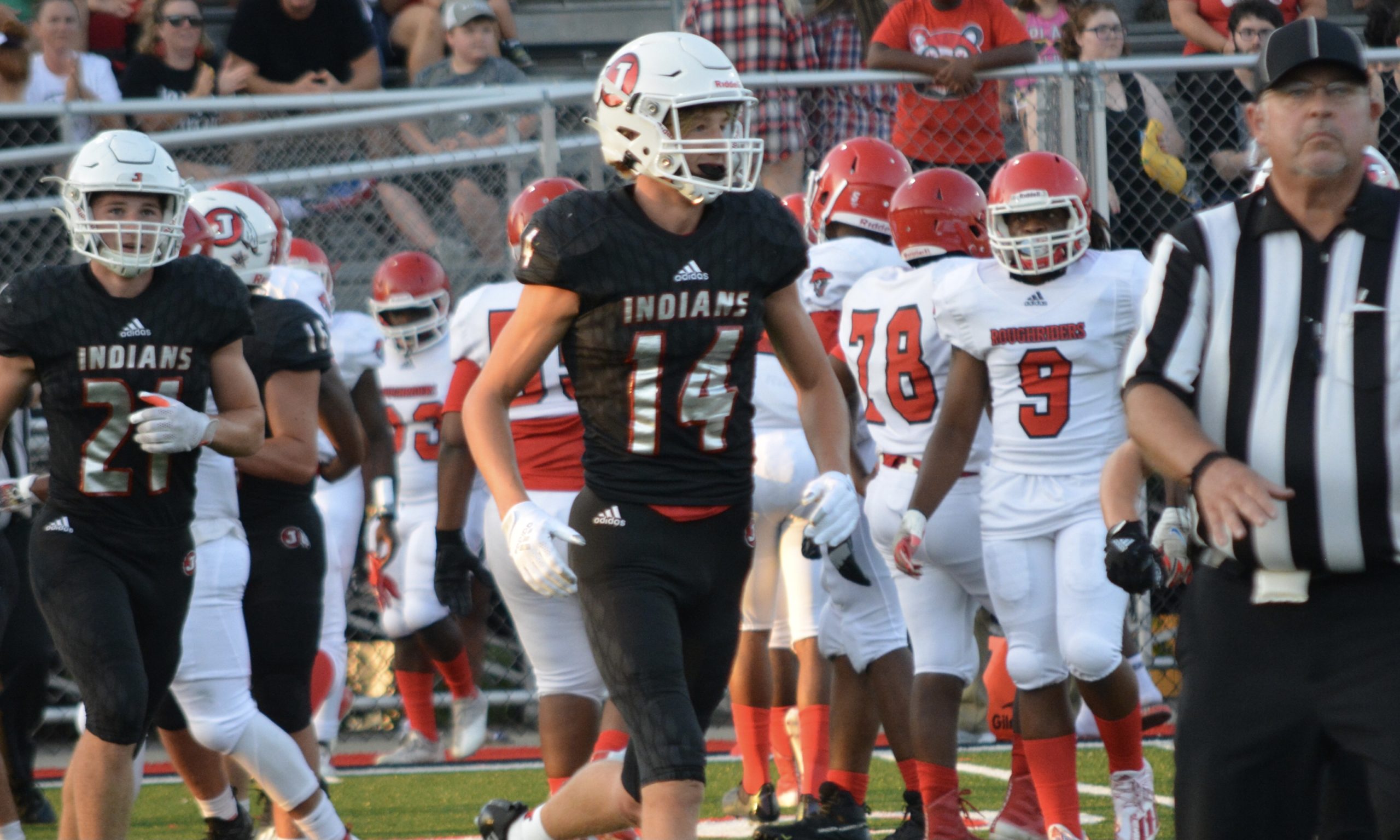 On Friday night, the undefeated Jackson football team traveled across the river to Illinois for its regular-season finale. The Indians (9-0) indeed remained unbeaten despite the fact they were tied with O’Fallon (6-3) 7-7 heading into the fourth quarter.

In a game where field position was crucial, Jackson senior safety Flint Guilliams proved to be the difference maker as he recorded 118 return yards on a total of eight returns.

Guilliams also gave the Indians a three-touchdown lead in the final minutes after intercepting a pass by Panthers junior quarterback Colton Michael for a 45-yard touchdown return.

O’Fallon’s Michael was nearly picked off on two separate occasions on the same drive before Guilliams made the interception to secure the victory for Jackson.

“Players made plays. He didn’t do as well in the first half as he did in the second half,” Jackson head coach Brent Eckley said. “He’s a smart, savvy kid and a competitive, tough kid. I’m not a bit surprised he made huge plays down the stretch in the second half for us.”

In the fourth quarter, one of Flint’s returns allowed Jackson to only need 42 yards to score, which they accomplished in three plays. Senior quarterback Cameron Marchi hooked up with junior wide receiver Isaiah Davis for a 23-yard touchdown that broke that tie with 10 minutes, 57 seconds left.

The Indians defense then forced one of their five three-and-outs of the game, which then allowed Jackson to put points on the board once again. However, it wasn’t the offense that did so as senior kicker Logan Bruns nailed a 28-yard field goal to give the Indians a 17-7 lead with 7:52 remaining.

O’Fallon took over two minutes off the clock on the next drive as the Panthers answered with a 30-yard field goal of their own by senior kicker Tyler Lunning.

However, another key return by Guilliams gave Jackson 55 yards to work with on its next drive as Marchi found senior wide receiver Kannen Turley for a 40-yard touchdown to make it 24-10 with just 4:06 left in the contest.

“I told [Marchi] after his last touchdown pass that he made me look like the smartest guy in the stadium,” Coach Eckley said. “We were going with a four-minute offense and the numbers say run it. He executed and threw a perfect ball to Kannen that was a touchdown for us. That’s really what was there, and he executed rather than almost executing it.”

Marchi and Turley connected earlier in the game for the Indians first score, which was for 36 yards with a little over two minutes left until halftime.

Marchi finished 20-of-28 passing the ball with 264 yards, three touchdowns and was intercepted for the second week in a row. This was at the end of the first half when Marchi attempted to hit Turley in the endzone, but Panthers senior cornerback Ethan Billingsley leaped in front of Kannen to make the pick.

Turley finished as the leading receiver of the game with seven catches for 132 yards and two touchdown catches, while Davis paced him with 86 yards and one touchdown on six grabs.

On the ground, Jackson didn’t have the type of success it would’ve liked even though junior running back Tony Williams finished as the game’s leading rusher. He ran for 69 yards on 14 carries but failed to find the endzone as what would’ve been a 2-yard score in the first quarter was called back due to holding.

O’Fallon junior running back Christopher Caldwell finished behind Williams with 57 yards on 13 attempts, but he did manage to record his team’s lone touchdown of the contest. His score came on the first drive of the game when the Panthers ran a total of 19 plays that nearly took nine minutes off the clock.

Jackson’s defense kept O’Fallon out of the endzone the rest of the contest as senior inside linebacker Jacob Farrow came up big on third down twice. Farrow did so by recording two sacks to force the Panthers to punt, and he had another sack at the end of the game.

On top of his three sacks, Farrow recorded 15 tackles as fellow inside linebacker junior Griffin Horman led the Indians in stops with 16 with two for a loss. Jackson senior outside linebacker Ryley Styer also had double-digit tackles with 12 and one sack.

The Indians have this Friday night off thanks to receiving a bye after earning the No. 1 seed in the Class 5 District 1 Tournament, which they have won the past three seasons.