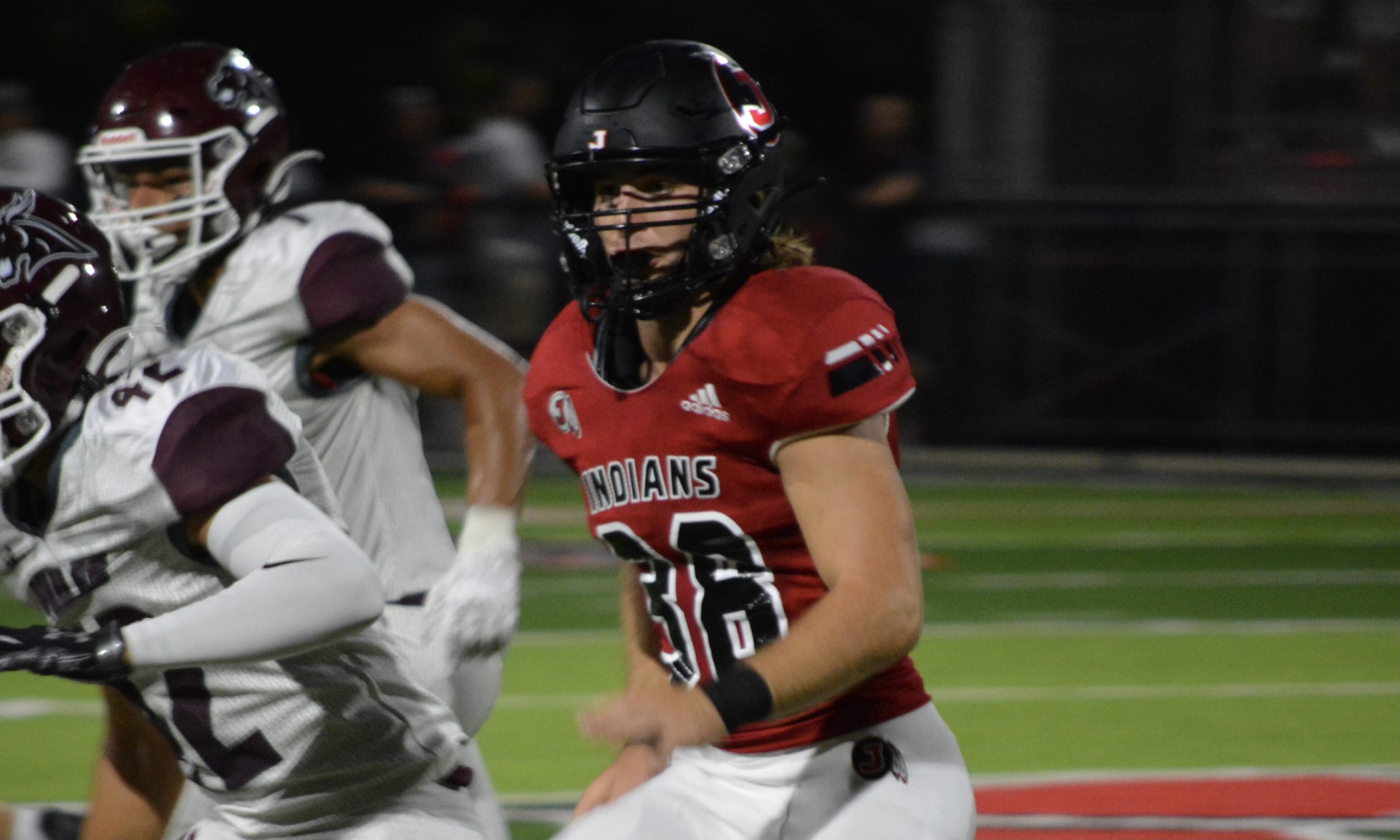 Junior outside linebacker Fisher Stevens recorded a game-high three sacks and one safety in Jackson’s 42-14 win over Cape Central on the road last Friday night. Photo by Jay Forness

In what was the 116th meeting on the gridiron between crosstown rivals Jackson and Cape Central last Friday night, the Indians picked up their seventh-straight win over the Tigers.

This win not only put Jackson above .500, but it also moved the Indians (3-2, 3-0 SEMO) one step closer to winning their fifth-straight SEMO North Conference Championship.

Throughout the first 15 minutes and a half of action, Jackson kept Cape (2-3, 1-1 SEMO) out of the endzone like it has for the past three seasons. However, the Tigers ended their three-year scoring drought versus the Indians with a 3-yard touchdown run by Cape sophomore running back Za’Aire Thomas.

Thomas’ score narrowed Jackson’s lead to 12-7 after the Indians senior running back Tony Williams scored not one but two first quarter touchdowns. On Jackson’s next drive following the Tigers first score of the game, Williams went down with an injury and had to be helped off the field.

Williams failed to return to the game for the Indians as senior wide receiver Chase Fisher filled in at running back, along with sophomore Zach Zimmerman and junior Jason Goodman.

Cape’s defense forced Jackson to turn the ball over on downs as senior defensive back Clayton McClard brought down junior quarterback Adrian Fox at the Tigers 6-yard line.

Cape had a penalty to start the ensuing drive, but on the play after, senior quarterback Morgan Diamond heaved the ball to freshman wide receiver Marquel Murray.

Murray leaped in the air to get front of backup corner-back junior Dru Herring, and he hauled in the pass and went untouched to the endzone for a 97-yard touchdown with five minutes, 29 seconds left in the first half.

The Indians were without one of their starting corners in junior second-year starter TJ Altenthal, who was out with an injury.

This would have given Cape its first lead over Jackson since 2016, but Murray was called for offensive pass interference after the play to negate the touchdown. Following the penalty, the Tigers had a false start to back up to their own 2-yard line.

“I still haven’t seen that play on video yet — I see most of them on the sideline, but I hadn’t seen that one yet,” Jackson head coach Brent Eckley said following the game. “I don’t know if it’s a bad call or not, but the bottom line is [the referees] called it. It’s not like there was influence from our guys — they just called it.

“It was a huge momentum swing that’s for sure going from being down a touchdown to being back up. That’s a critical point in the game, and you hate to think it was a missed call, but I don’t know. There’s no judgment there, and the thing is, it’s one play.”

Two plays after an incomplete pass and a run for no gain, Diamond was brought down in his own endzone with a sack by junior outside linebacker Fisher Stevens. This was the first safety of Stevens’ career, and he brought down Diamond two more times with a sack in the contest.

“It felt real good [getting that safety] because we had a tight spot there,” Stevens said. “… Man, that’s our rival. Our side — we showed up tonight, and I think we played well for the most part. It really just comes down to doing your job.”

The touchdown that was called back and Fisher’s sack for a safety proved to be the momentum switch the Indians needed to beat Cape for the seventh year in a row. Stevens’ final sack of the night was in the third quarter with 1:50 left, where he chased down Diamond and tackled him from behind.

Diamond fumbled on the play and this allowed for fellow junior outside linebacker Hayden Wessell to recover the fumble and score his first varsity touchdown. This was Jackson’s sixth and final score of the night to give itself a 42-7 lead over the Tigers.

Cape scored once more to all but end the running clock after Jackson was up by 34 points as Diamond hooked up with senior wide receiver Marshon Edwards for a 6-yard touchdown.

Outside of Williams and Wessell, Chase Fisher also had a touchdown of his own on a 1-yard run late in the second quarter to give Jackson a 21-7 lead heading into the locker room.

Fellow senior wide receiver Isaiah Davis also scored a short-yardage touchdown with a 1-yard run to make it 28-7 in the third quarter. He did so while taking a direct snap in Jackson’s jumbo formation, which features blockers outside of the offensive line like senior defensive end Tony Terry Jr., senior inside linebacker Griffin Horman and junior nose tackle Reid Landers.

The fifth touchdown of the night was also scored on the ground as Adrian Fox, who transferred from Cape Central to Jackson last school, came up with a 4-yard score with 2:03 left in the third. The Indians went up 35-7 after Fox’s score and Wessell’s fumble recovery for a touchdown followed right after.

Despite senior Zach Calder starting the game at quarterback, Fox saw a majority of the snaps in the ongoing quarterback battle for the Indians.

“I thought both quarterbacks did a good job — I look where we at passing wise, and we were 4-of-7 and 6-of-7, so I’m pleased with that,” Coach Eckley said. “We didn’t chunk them for a lot of yards, but they were giving us short stuff, so we took short stuff and took care of the ball.”

Next up for Jackson will be its final conference matchup of the season with a road game against Sikeston (1-4, 0-2 SEMO). The Bulldogs are currently on a three-game losing streak after falling to SEMO opponent Poplar Bluff (1-4, 1-2 SEMO) 35-2.

Jackson, of course, beat both Farmington and Poplar Bluff with ease by scores of 47-7 and 35-7, respectively.