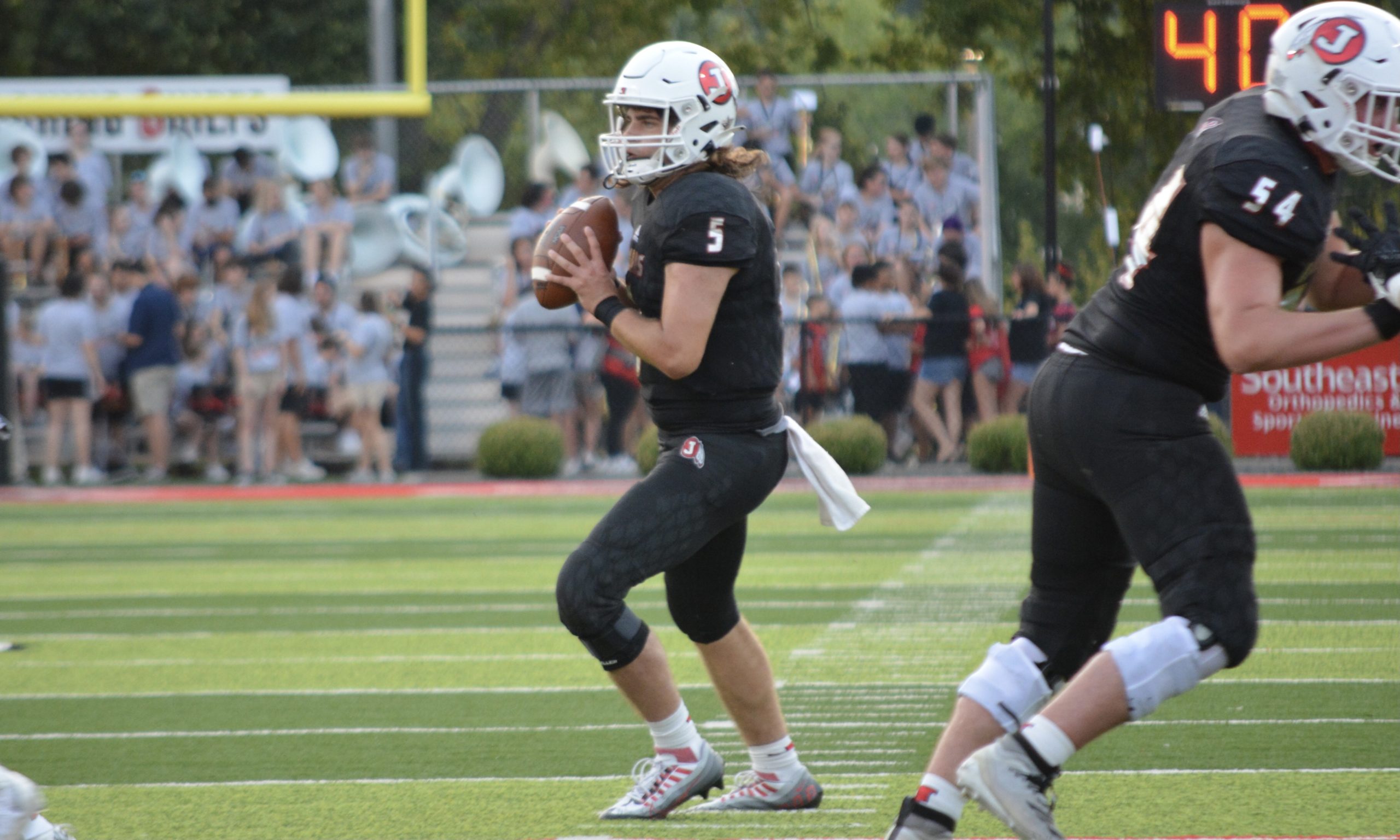 Senior quarterback Zach Calder threw for 221 yards and three touchdowns in Jackson’s 52-0 win over Festus on Friday night at The Pit. Photo by Jay Forness

In its final regular-season game of the year last Friday night at The Pit, Jackson’s football team recorded its second shutout in three weeks with a 52-0 win over Class 4 unranked Festus. This win was crucial for the Indians (6-3) as it solidified them having the No. 1 seed in the upcoming Class 5 District 1 Tournament, which means Jackson also receives a first-round bye.

Having quite the performance against the Tigers (4-4) was Indians senior quarterback Zach Calder, who passed for a game-high 221 yards and three touchdowns while completing 61.1% of his throws.

“It feels good to have a bye this week,” Calder said. “We earned it, and I’m proud of our guys — we played well tonight. The offense really stepped up in the second half, and our defense played great the whole game.”

This season has been unlike any other in recent memory as Jackson has split the quarterback job between two players in Calder and junior Adrian Fox. However, Fox has now thrown four interceptions in the last two weeks after being picked off against Festus.

Still, though, Calder doesn’t mind splitting up some snaps with Fox as he’s proven to be a real threat on the ground when he’s not attempting to throw. More importantly, the two have been there for each other this fall.

“We help each other out — I encourage him when he’s on the field, and he encourages me when I’m on the field,” Calder said. “We both do whatever it takes to help the team win.”

Topping Davis’ all-purpose yardage at 194 and recording a game-high 173 receiving yards was sophomore wide receiver Kai Crowe. Crowe caught one of Calder’s touchdowns for 59 yards and also had a 7-yard touchdown run.

In his second game back from injury, senior running back Tony Williams finished with a game-high 134 rushing yards and one touchdown off 11 carries.

Along with recording its second shutout of the season, Jackson’s defense also forced four three-and-outs as Festus only gained 225 yards of total offense compared to the Indians 580 yards.

Having a standout game was junior Hayden Wessell, who lined up all over Jackson’s defensive line for eight tackles, three tackles for a loss, one sack and one blocked punt.

The Indians won the top seed in the district tournament over No. 2 seed Oakville (5-4) with this win. Oakville will face No. 7 Webster Groves (1-7) this Friday, while Jackson has the week off.

Jackson will return to action against either No. 4 seed Poplar Bluff (4-5) or No. 5 Fox (2-7) in the district semifinals Nov. 4. The Indians handled the Mules 35-7 back in Week 4. “It’s been a great season so far, but I’m ready for the postseason,” Calder said.