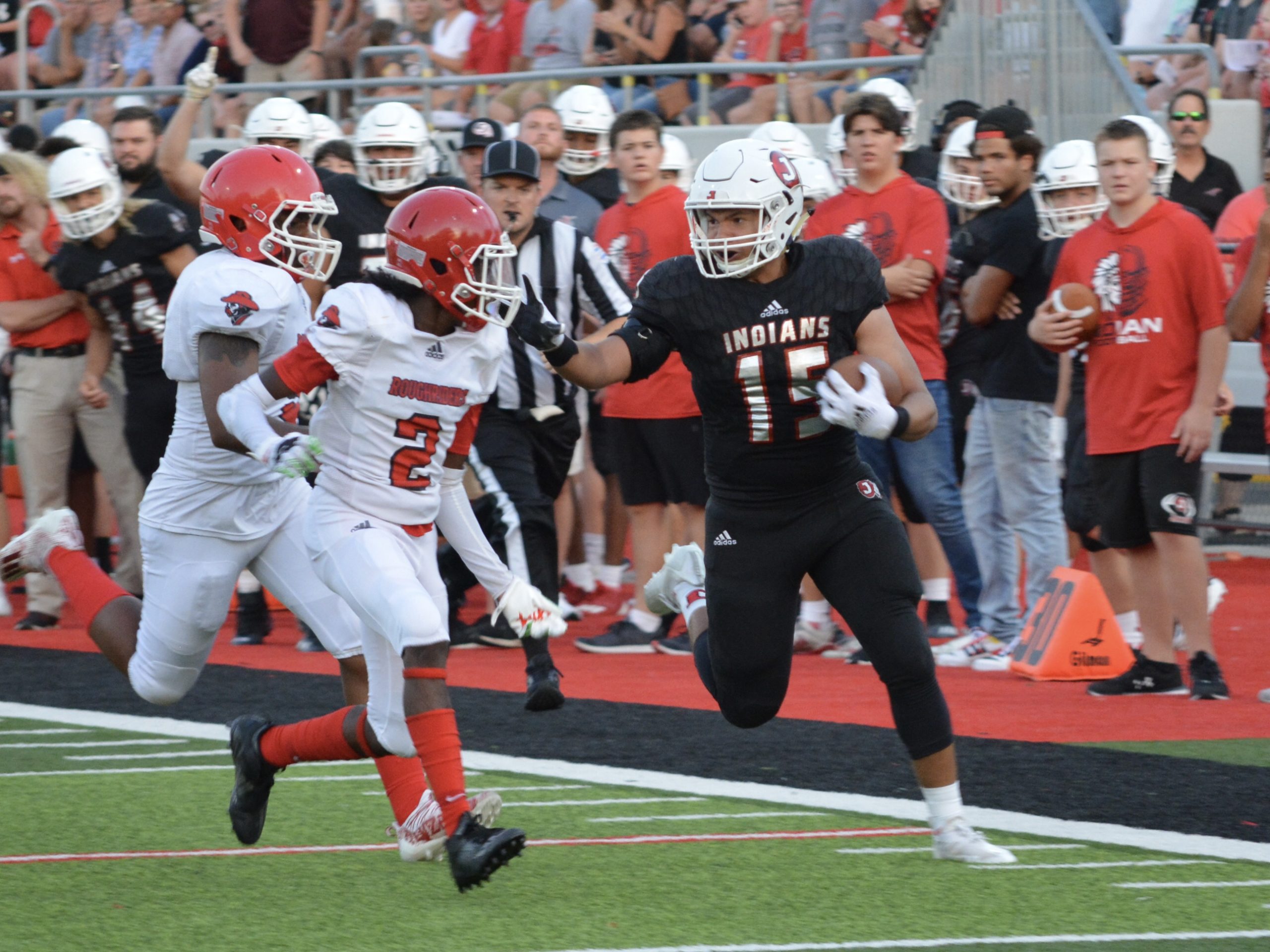 Jackson junior running back Tony Williams only needed three carries to run for a game-high 95 yards (31.7 yards per carry) and scored two touchdowns in Friday night's 80-6 win over Roosevelt at The Pit. Photo by Jay Forness

Coming off its best season in program history, the reigning and defending Class 5 State Champion Jackson football team had no problems taking care of business on Friday night in its regular-season opener at The Pit.

In fact, the Indians set a new program record for most points scored at home — tied for most in a single game — by beating Class 4 Roosevelt 80-6. Nine different players for Jackson scored as three of them had multiple touchdowns, which were running backs junior Tony Williams, sophomore Jason Goodman and sophomore linebacker Titus Jackson.

Williams and Goodman tied for a game-high two rushing scores, while Tony broke off for 95 yards with just three carries for an average of 31.7 yards per rush. Goodman paced Williams with 71 yards of his own on seven attempts.

Before this season, Williams had to undergo shoulder surgery this offseason, which forced him to miss valuable time in the weight room. He wasn’t able to start lifting until just a few weeks ago, but him being one of more Jackson’s savvy football players, it’s no surprise as to why he had a successful Friday game night.

“[Williams] is a kid we can play probably in four or five different spots on offense,” Jackson head coach Brent Eckley said. “He can just figure it out because he understands the concept of what we’re doing, so it’s good that he had big runs tonight. He’s going to have tougher nights than tonight — he’s going to be grinding at some point during this season, and he’ll love it, too.”

As far as Williams’ running mate Jason Goodman, Coach Eckley continued to give high praise to the sophomore by comparing him to former Indians all-state running back Seth Waters (2019 graduate).

“There’s not a whole lot better I could say about a guy. Seth was one of those kids that was a tough, tough competitor at 145 pounds,” Coach Eckley said. “For me, Jason looks and moves like him a lot. He sticks his foot in the ground and takes off with immediate acceleration a lot like Seth.”

Both of Titus Jackson’s touchdowns, indeed, came on the defensive end even though he did line up at running back in the second half. Each score was a fumble recovery in the endzone for a touchdown as both scores occurred in the last five minutes of the game.

Out of its 32 plays, the Indians ran the ball 28 times and only had to throw it five, but they still completed every pass as first-year starting quarterback Cameron Marchi went 3-for-3 for 42 yards and one touchdown in his second-career start. Marchi also scored on the ground off two carries with a 9-yard run in the first quarter and also had a gain of 16 yards.

Defensively, the Indians didn’t allow Roosevelt’s offense to cross the 50-yard line until the second half of action when they had their backup units in. The Roughriders lone score of the game came off a 93-yard kick return by junior Tavion Campbell.

Roosevelt’s finished with negative 34 total yards and only passed the ball 10 times. The team’s leading rusher only gained 11 yards on seven carries, which was junior runnning back Makye Peyton for an average of 1.6 yards per rush. Losing the most yards for Roosevelt was sophomore quarterback Izaiah Jones, who somehow managed to finish with negative 53 yards on 10 carries.

“Roosevelt didn’t show up for somebody that feels sorry for them. I felt bad that there were some things we maybe could’ve tried to control a little bit better, but their kids never quit,” Coach Eckley said. “They kept playing, but they were just making mistakes. When you only have 25 guys that are eligible to play, they’re going to get tired when it’s 90 degrees outside.”

Seven players on Jackson’s defense recorded four or more total tackles against Roosevelt as five of them made multiple stops behind the line of scrimmage.

Leading the Indians in tackles for game one was senior inside linebacker Jacob Farrow with nine stops and one tackle for a loss, while sophomore outside linebacker Fisher Stevens paced him with eight stops and two tackles in the backfield.

Having the most tackles for a loss was none other than Jackson’s only returning starter at linebacker in senior outside backer Ryley Styer, who finished with three on top of his eight tackles and blocked punt. Other Indians to have multiple stops in the backfield besides Stevens and Styer were junior inside linebacker Griffin Horman, senior defensive end Alex Lewis and junior defensive end Tony Terry.

“We did some really good things defensively, and I thought our guys played pretty sound,” Eckley said. “I thought our defense ran to the ball pretty well and our inside linebackers did a good job of getting down hill.”

Also having a tackle for a loss from his safety position was returning all-stater Flint Guilliams, who also recorded the game’s only interception along with making a total of four stops.