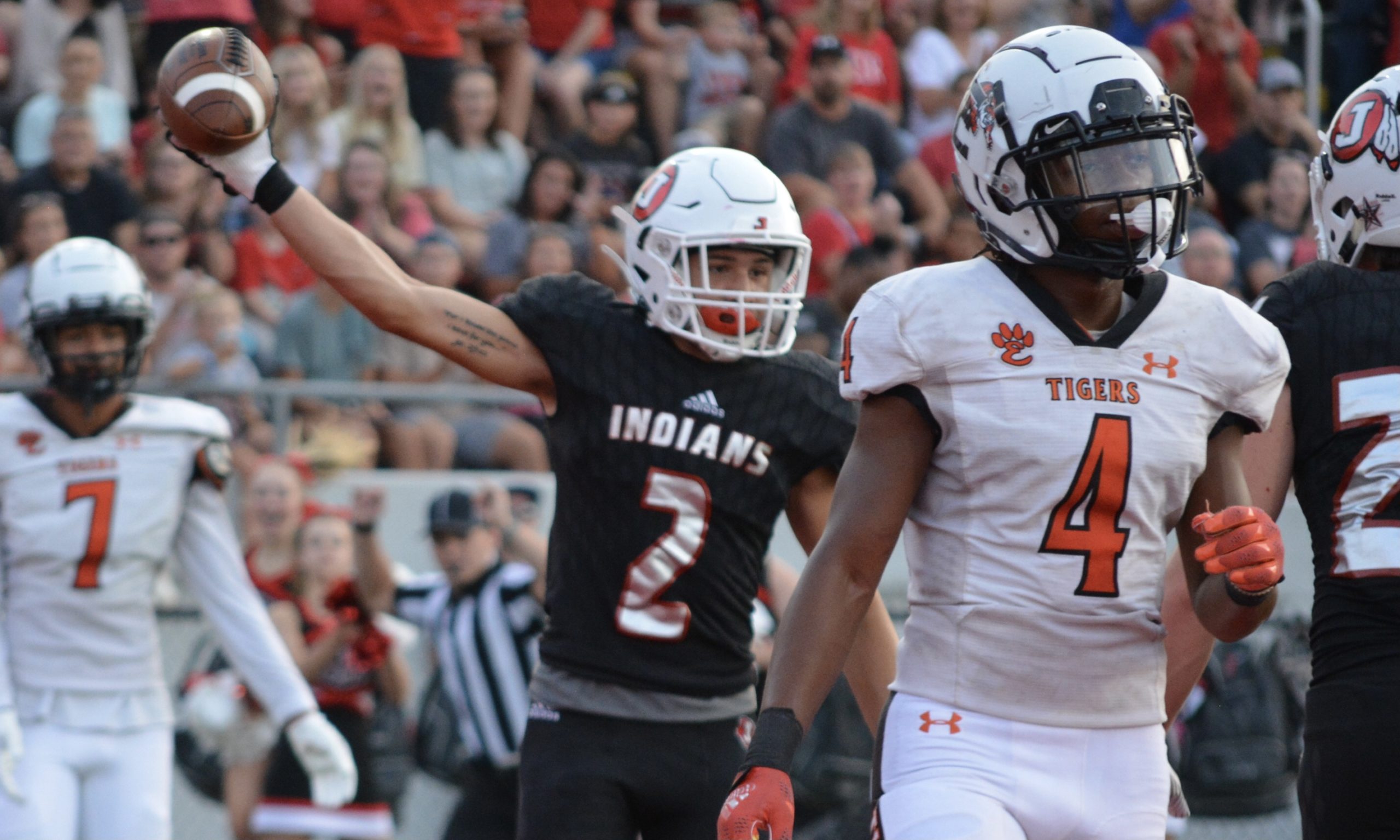 For the fifth year in a row, the Jackson football team captured the SEMO North Conference Championship in dominating fashion.

In their last four games, Jackson has outscored its four conference opponents (Cape Central, Farmington, Poplar Bluff and Sikeston) by a combined total of 192-41. The Indians haven’t scored less than five touchdowns or allowed more than two scores in conference play.

“It’s cool [to win the conference] because with the way we started it’s easy for people to say, ‘They’re not very good,’” Jackson head coach Brent Eckley said. “People are going to line up and take shots at you, but so far we’ve had really good, physical games from our standpoint.”

On top of Jackson winning a fifth consecutive conference title, this was Coach Eckley’s 100th win as the Indians head coach. Since Jackson hired Eckley back in 2012, the Indians have only had suffered losing season (finished 5-5 in 2015).

Jackson had eight different players find the endzone against Sikeston as the last time the Indians scored more than 60 points was in the 2021 season opener (80 versus Roosevelt).

One of those players for Jackson was senior wide receiver Isaiah Davis, who finished with one touchdown catch and one touchdown run in the first half. The Indians held a 46-7 lead over the Bulldogs at halftime.

For Davis’ first score, he hauled in a 25-yard touchdown pass from senior quarterback Zach Calder. Isaiah’s other score was a 10-yard with 15 seconds left in the second half. In all, Davis recorded 136 all-purpose yards off 11 touches as 115 of those yards came through the air with seven receptions.

Calder had one of his better outings versus Sikeston as he completed 11 of his 14 passes (78.5%) for 169 yards, two touchdowns and no interceptions. Zach also had a 1-yard touchdown run following his pass for six to Davis.

Hauling in Calder’s other touchdown pass was sophomore wide receiver Zach Crowe, who finished with 113 all-purpose yards of his own (104 receiving and seven catches) on eight touches.

Jackson’s third and final score through the air came in the fourth quarter when junior quarterback Adrian Fox dialed up sophomore wide receiver Gavin Alspaugh for a 76-yard touchdown. Like Calder, Fox only had three incomplete passes on seven attempts for 126 yards, but he did manage to throw an interception.

However, Fox also scored on the ground with a 3-yard run in the first quarter to give Jackson a 30-0 lead. Adrian finished as the Indians second-leading rusher with 40 yards off five carries.

Leading the rushing attack outside of Fox was a combination of senior Chase Fisher and junior Jason Goodman, who combined for 74 yards and two touchdowns off 17 attempts.

Fisher and Goodman are filling in for Jackson senior running back Tony Williams, who suffered an injury against Cape Central in the first half last week that took him out for the remainder of the game.

The eighth and final Indian to score against Sikeston was freshman wide receiver Carter Shipman, who came up with a 9-yard touchdown run in the first quarter.

Defensively, Jackson only allowed Sikeston to record 153 of total offense as Bulldogs quarterback Kayden Craig finished 8-of-21 (38%) for 76 yards, one touchdown and two interceptions. The Bulldogs leading rusher was running back Trez Clark, who ran the ball 15 times for 49 yards and a touchdown.

Leading the way defensively for the Indians was senior inside linebacker Griffin Horman as he finished with a team-high 11 tackles and recovered a fumble. Horman was also one of the three Jackson players to have multiple tackles for a loss as he came up with two.

The Indian who came up with the most stops for a loss was senior defensive end Tony Terry Jr. with three on top of his five tackles and one pass deflection. Jackson junior inside linebacker Peyton Klund was the third Indian to have multiple TFLs with two.

Three separate Jackson defenders also came up with interceptions as one was junior outside linebacker Fisher Stevens, who also had six tackles. The other Indians to record picks were junior cornerback TJ Altenthal and sophomore defensive back Tyson Ford.

Jackson has three regular-season games remaining on its schedule till the start of the Class 5 District 1 Tournament. Only one of those teams has a record above .500 as the Indians will host Confluence Prep (1-4) Friday, travel to Holt (5-1) on Oct. 14 and lastly host Festus (2-4) Oct. 21.