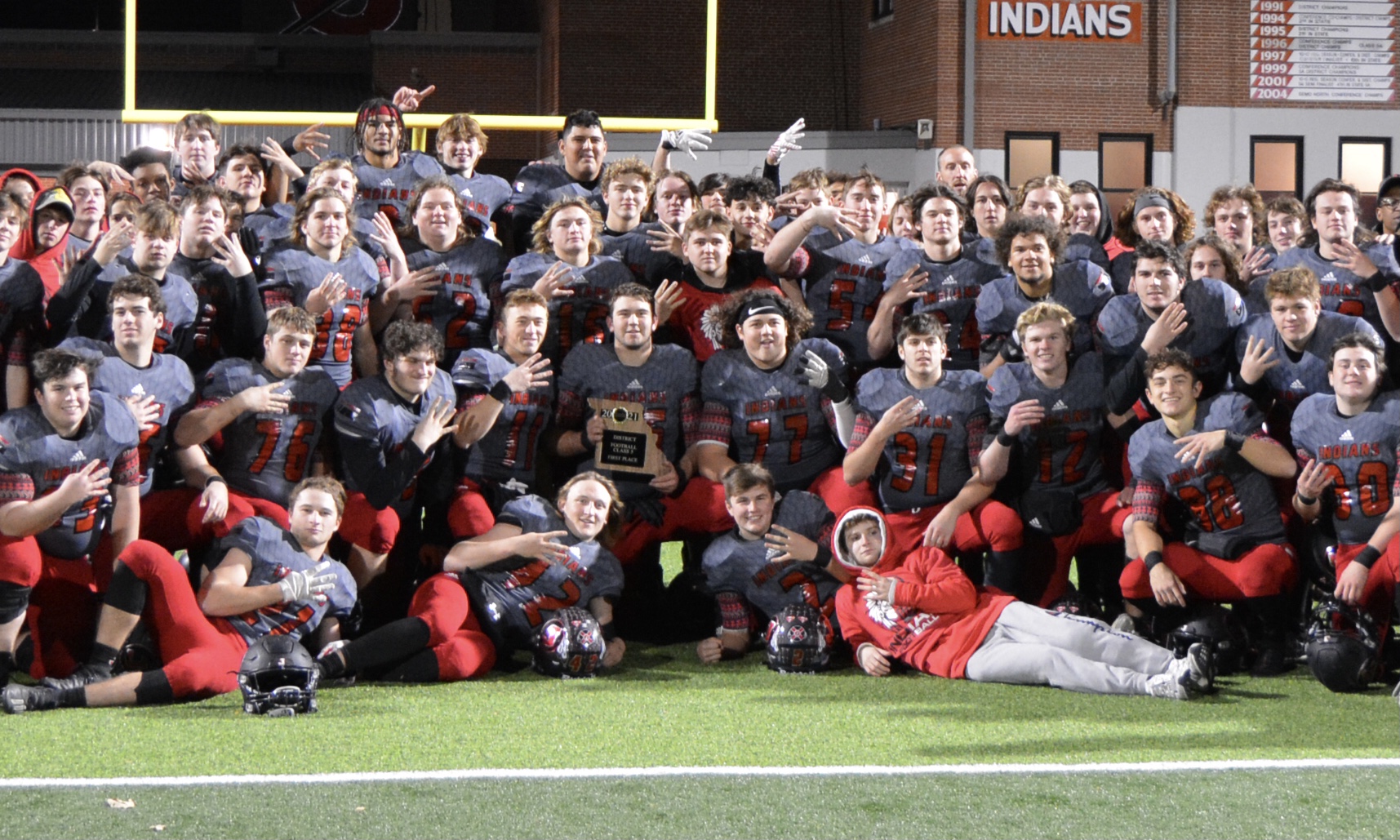 The Jackson football team poses with the Class 5 District 1 Championship plaque after beating Seckman 52-14 on Friday at The Pit. Photo by Jay Forness

The last time the Jackson football team fell short of winning the Class 5 District 1 Championship was back in 2017. Since then, the Indians have now won each of the last four district title games by three touchdowns or more.

No. 1 seed Jackson increased its district championship streak to four after beating No. 2 Seckman (9-3) handedly at 52-14 last Friday night as the Indians strung off 35-unanswered points in the first half.

Four of those scores were through the air as Jackson senior quarterback Cameron Marchi finished with the game with a career-high six passing touchdowns. Marchi also completed 73.6% of his passes for 264 yards as four different receivers hauled in touchdown catches.

“In my mind, [Marchi] is the best quarterback down here in Southeast Missouri, and I think he’s been proving that,” Jackson head coach Brent Eckley said. “As we’ve been going down the stretch here, he’s been really solid with the football and taking care of it. He’s been playing fast, and he’s just doing it.”

Coming up with two scores apiece was the receiving duo of wideouts senior Kannen Turley and junior Isaiah Davis as they combined for 197 yards and four touchdowns on nine grabs. Fellow slot receiver sophomore Blayne Harris also had a receiving touchdown for the second-straight contest.

Jackson’s senior kicker, who also starts at outside receiver, Logan Bruns, scored the first touchdown of his career after coming down with a pass from Marchi in the first quarter.

“That’s cool for [Bruns], and he did the exact right thing. Basically they were trying to double [Turley], and so Logan went vertical and was clean on top,” Coach Eckley said. “[Marchi] did a good job reading it, and it wasn’t an easy catch either because it was on the edge and on the outside frame of his body.”

On top of his touchdown catch, Bruns made his third field goal of the season with a successful 22-yard attempt with two minutes, 44 seconds left in the third quarter.

Out of Jackson’s 458 yards, 194 of them came on the ground as nine different players carried the ball. Junior running back Tony Williams had 45 yards and one score on 11 rushes.

Defensively, Indians senior outside linebacker Ryley Styer filled the stat sheet with six tackles, two tackles for a loss, one fumble recovery, one blocked punt and one pass deflection. Jackson junior defensive end Tony Terry paced Styer with a team-high eight stops with one being behind the line of scrimmage.

However, this didn’t prevent Seckman junior quarterback Cole Ruble to rush for a game-high 160 yards with one touchdown on 23 attempts. More than half of Ruble’s yards came on his 86-yard touchdown run, though, in the second quarter.

Ruble only threw the ball eight times compared to Marchi’s 19 passing attempts as the Jaguars signal caller completed five of those throws but for only 37 yards.

“[Eight throws] is probably a lot for them. I would guess that’s probably double of what they normally do,” Eckley said. “They only got the one chunk play on us and other than that they were short passes, so we were stopping them short of the sticks. I’m pretty pleased with that.”

The Jaguars didn’t score again until there were 36 seconds left in the game as senior wide receiver Ty Kitchen broke off a 71-yard touchdown run.

Next up for Jackson (11-0) is fellow undefeated Class 5 member Rockwood Summit (11-0) in the quarterfinals this Friday at The Pit. The Falcons have recorded five shutouts while not having allowed any of their opponents to score more than 13 points this season.