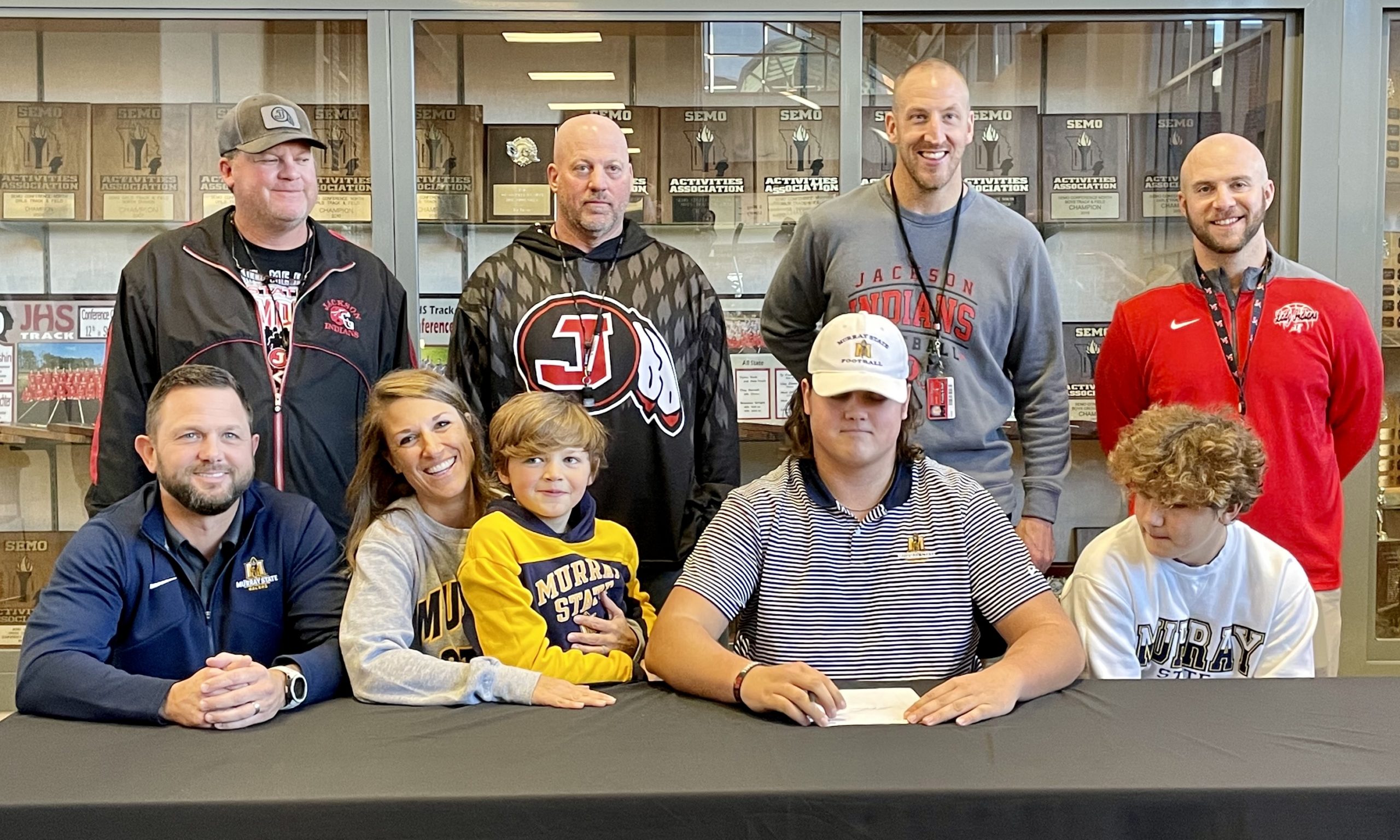 Ashton Flinn didn’t start playing football until he was in junior high, and he first aspired to be a wide receiver — not an offensive lineman.

This was understandable since Flinn was nowhere near his current 6-foot-4, 290-pound frame that he has today. Ashton missed offseason camps to prepare for playing wide receiver in junior high, though, so he was fortunately moved to offensive line.

Flinn had primarily played baseball his entire life up to seventh grade, but his friends were able to encourage him to tryout football.

“My friends had pushed me to play football ever since youth league, and I finally just gave it a try,” Flinn said. “I fell in love with it. I came in to the first day of practice running routes and had no idea what I was doing, and the offensive line coach was like, ‘You’re too tall to be playing wide receiver.’ I got stuck at offensive line by default originally, but it was a good change.”

Fast forward to last month, the three-time all-stater and state champion for Jackson capped off his high school football career by signing with Murray State. Flinn had received other Division-I offers from Eastern Illinois and Southeast Missouri State.

“Realistically, it was a hard decision because they all were in the same conference,” Flinn said. “No matter what I’d be seeing those teams, but now that Murray moved that’s not the case. The biggest thing for me was when I went and took an unofficial visit at Murray, it automatically felt like home.”

Flinn’s official visit to Murray sealed the deal for Ashton and made him realize it was indeed his home away from home. The two biggest factors for Flinn in his decision to sign with Murray State were the coaching staff and the smalltown feel.

Another key selling point for Flinn is that Murray, Kentucky, is only two hours away from home. On top of that, Ashton’s girlfriend has a lake house that’s only five minutes away from campus, so he can have weekend vacations whenever he needs them.

The thought of playing college football didn’t enter Flinn’s mind until his sophomore season when he first earned all-state honors. Former Indian and current Dordt running back Daniel Dickerson was the one who told Ashton to check social media when the all-state teams were announced.

“I was not expecting it at all. Daniel called me and was like, ‘Dude! Check Twitter right now,’ and I’m like, ‘Ok, whatever,’” Flinn recalled. “I check and see that I’m all-state and am like, ‘Holy cow that’s awesome!’ At that point, I was just working as hard as I could to keep a starting spot. I had no aspirations to be all-state, but once I figured out I was an all-stater — that’s what really drove me to be as good as I can.”

Flinn and the Indians reached their first state championship game together that same season, but Jackson ended up falling to Carthage in overtime 27-21 of the Class 5 state final.

For Ashton’s junior campaign, though, he and Jackson came back better than ever and won every game — including the program’s first-ever state title — by 24 points or more.

“I’ll probably remember being a Jackson Indian for the rest of my life,” Flinn said. “I don’t want to live in my past, but it’s always something I’ll have to look on at the past and be like, ‘Wow, that happened.’ We’ll always be in the record books as state champions, so that’s something I can always look at.”

One of the reasons why the Indians were so formidable during that 2020 season is because they had not one but two Division-I offensive lineman on their roster — Flinn and current Missouri Tiger Connor Tollison.

Despite being “frenemies” during Flinn’s freshman year, he and Tollison are now close friends and keep in contact as much as possible. Tollison, who is 6-4, 305, played in a few games for Missouri this season and has had plenty of advice to offer Flinn in preparation for D-I football.

“We were best friends my sophomore and junior year. We hung out inside school, outside of school and whenever we had the chance,” Flinn said. “… He gives me updates about his offseason training. I went up to see him play SEMO, which is one of the games he really played in a lot.

“One of the biggest things he said to me is ‘Just stay open.’ He was a left tackle and a really good one in high school, but right now Mizzou is looking at him playing center. His biggest thing is stay open, work hard and do what you need to in order to play.”

When Flinn was first named as an all-state offensive lineman, he felt like his best trait was run blocking. This has since changed since he primarily focused on pass blocking his junior year, so now he’s well balanced but feels protecting the quarterback is his best attribute.

“When it comes to run blocking, I used to love running those inside zone, powers and counters — anything I could pull on or just get down and dirty,” Flinn said. “Playing tackle, I’ve loved the outside zones and stretch because I love getting on the perimeter. Any of the screens I can go out and block — that’s probably my best aspect is when I can get out in space and lead block.”

Whenever Flinn is off the gridiron or not in the weight room, he will be studying finance as he wants to eventually get into real estate. “Everybody needs somewhere to stay, so I feel like that business is always going to be around,” Flinn laughed.