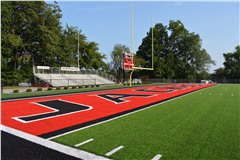 Both the Jackson football and boys soccer team will be playing on brand new artificial turf fields starting this season after the School Board unanimously approved a bid from ATG Sports to install both fields for $1.37 million.

The District also moved forward with adding new scoreboards to the football field since the bid was lower than the estimated costs.

The scoreboards cost a combined $200,000 as one of the scoreboards features video for replays and footage from the sidelines as well as special presentations.

“It’s been a long time coming as a head coach — anytime that I’ve been coaching I’ve not coached a team that’s been on turf,” Jackson football head coach Brent Eckley said. “I am keenly aware of the advantages that you have with turf.”

One of the advantages Eckley pointed out was not having to worry about rain since the playing surface will not be affected on a turf field.

This factor helps keep the program’s practice fields in good condition because when there is inclement weather the team will just practice at The Pit instead.

Coach Eckley said being able to have practices on the new field instead of the fields near the road also saves time and improves communication for calling plays.

Eckley is also happy the stadium has the same look because usually when other schools have renovations such as this they end up changing other things than just the field.

“In our place it’s like you’re in an old stadium that has turf, and I don’t think you can get any better than that,” Eckley said. “I believe Jackson is the only football-only stadium that has turf in the state of Missouri. … It’s a point of pride for us in our football program that our facility is so nice.”

The new playing turf at the soccer field is what boys soccer head coach Zack Walton is most excited about this season, who said he doesn’t know many other high schools in the state that have a soccer-only turf field.

Coach Walton, along with girls soccer head coach Justin McMullen, traveled to St. Louis in March to test which option of turf they wanted.

“Definitely the one that we picked out plays more like grass,” Walton said. “It truly does stand up like grass. The other type laid over, which was actually a bit more expensive, but they were selling both at the same price.”

Walton has been the boys soccer coach for 17 seasons and has also seen the installation of lights, bleachers and a scoreboard.

“It’s been really amazing to see where [this complex] has come from,” Walton said. “… I know when the Nolans were here they told stories about how they used to sprig the field by hand with their kids to try and get some Bermuda on the field. To hear the stories about it basically being dirt to come where it is today is amazing to see how much love there is for the game of soccer in this community.”