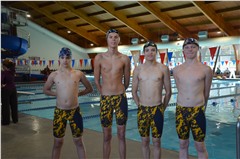 The Saxony Lutheran boys swimming and diving free-style team officially qualified for state in the 200 short course meter race with a time of two minutes, 5.84 seconds at a tri meet on Sept. 20 hosted by Cape Notre Dame.

This is the first time a Saxony swimming team has qualified for state in the program’s history, and head coach Dan Rau is excited about the opportunity this squad has.

“We’ve had individual swimmers qualify in the past, but this is the first girls or boys relay team that has qualified for state,” Coach Rau said.

Adding the “ingredients” was what it took for this relay team to qualify, according to Coach Rau.

“[It is] their willingness to make that sacrifice and put that extra effort into things,” Coach Rau said.

Sophomore Joshua Wydra and freshman Cody Griggs make up the rest of the team.

“[Wydra] is really learning how talented he can be, and Cody Griggs, who is a freshman, has a ton of raw talent,” Coach Rau said. “Putting those four boys together created this opportunity.

“The other part of it was created by the boys swimming divided into two classes where the qualification system is a lot different.”

Even though the team has qualified for state, this does not mean the group will compete in state as it would have to be ranked in the top 32 to do so.

Being able to get and remain in this top 32, which is based off what times the team records during the season, is using the energy from knowing they can qualify.

“Now the direction is focused towards, ‘OK. Now how do we get to the top 32,’” Coach Rau said. “How do we maintain that position so that we are not just qualified for state and we are actually at state?”

Saxony has five more meets before this year’s state championships on Nov. 2-3, starting with the Cape Rock Invitational this Saturday.

The SEMO Conference Championships is the final meet where the team will have its last shot of ranking in the top 32 to compete at state.