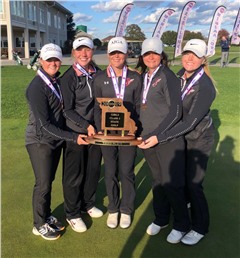 Last week was the first trip to the Class 2 State Tournament in the Jackson girls golf team’s three-year existence, and the Indians ended up taking third place at the Silo Ridge Golf and Country Club in Bolivar.

Jackson scored a total of 693 points in the two-day tournament to take home its first state plaque in history as three of the team’s golfers walked away with Class 2 All-State honors.

St. Joseph’s Academy won the Class 2 State Championship for the fourth-straight season with a score of 607 and had four golfers place in the top 10. Winning the individual state title was Laf-ayette junior Brooke Bierman with a score of 143.

It was none other than senior Taryn Overstreet, a former two-time Class 1 State Champion and two-time all-state honoree at Notre Dame, taking the top spot for the Indians coming in at 18th place. Overstreet scored a total of 166 points as she hit an 82 on day one and a 84 on day two.

Overstreet took fifth and sixth place as an underclassmen when the Bulldogs won state back-to-back in 2016 and 2017. She was forced to sit out her junior year at Jackson due to MSHSAA transfer rules.

The next two all-state finishers for Jackson were sophomores Ella Overstreet and Kaydi Rhodes, who tied for 21st place with a score of 168. Ella scored an 83 on day one followed by an 85, while Rhodes hit a 90 on day one but came back with a 78 to end the tournament.

This was not Ella’s first trip to the Class 2 State Tournament as she played in last year’s by becoming the first Indian to advance as an individual. She earned all-state honors as a freshman by placing 25th overall with a 170 by hitting 85 on both days.

Rhodes was just a few places shy from advancing from sectionals to the state tournament with Ella last year as she placed 24th. On top of helping lead Jackson to a podium finish and earning all-state this season, Rhodes also became the first Indian to win the Class 2 District 1 individual title. This was also the first year Jackson won districts in program history.

The Indians took home the district title with a score of 321 as Rhodes, Taryn and Ella Overstreet all placed in the top six of the tournament.

Jackson took second in sectionals with a 339 to St. Joseph’s Academy’s 305 to qualify for state as a team. Rhodes and Ella placed in the top 10, while Taryn finished in 15th place.

The final two golfers for Jackson at state were sophomore Jacie Pattengill and freshman Maggie Davey. Pattengill finished in the top 65 with a score of 191 to take 63rd place, while Davey finished 87th with a 211. Pattengill scored a 90 on the first day of the tournament followed by a 101 on day two as Davey hit a 100 on day one, but she finished with a 111.

Read next week’s Cash-Book Journal for a story about Jackson’s experience at state and the team’s reflection of this historical season.