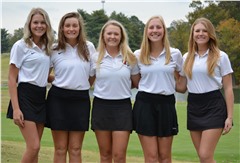 History is something Jackson girls golf senior Taryn Overstreet accomplished when she was an underclassmen at crosstown rival Cape Notre Dame. This was because the Bulldogs were able to win back-to-back Class 1 State Championships in 2016 and 2017.

Overstreet placed in the top six of each state tournament with Notre Dame while her older sister Sarah Bell, who currently plays for Oral Roberts, won individual state titles both times.

Overstreet will also be playing college golf herself at Drury University, and she decided to transfer to Jackson following her sophomore season since her younger sister Ella Overstreet would be a freshman in 2018.

“Originally I went to Notre Dame because my sister was there, and they were the only school in our area who had a girls golf team,” Taryn said. “Ella had a choice to go to Notre Dame or I could go to Jackson. I came here knowing these are a good bunch of girls, and I can play with another sibling of mine.”

Due to MSHSAA transfer rules, Taryn was forced to sit out of varsity play her junior year, but this set up for a 2019 season she and the rest of her teammates will never forget.

In Jackson’s first-ever trip to the Class 2 State Tournament two weeks ago in the program’s third year of existence, the Indians scored 693 points to bring home the third-place trophy.

Taryn, Ella and sophomore Kaydi Rhodes each placed in the top 25 of the tournament to earn all-state honors, which was the third time for Taryn and second-straight honor for Ella.

Taryn placed 18th overall with a combined score of 166 as she hit an 82 on day one and an 84 to follow on the second and final day. Ella and Rhodes tied for 21st overall with a total of 168 points as Ella went 83, 85 while Rhodes started the tournament with a 90 but finished with a 78.

Fellow sophomore Jacie Pattengill placed 63rd overall with a combined score of 191 points as she hit a 90 on day one followed by a score of 101 to end the tournament.

Last season as a freshman, Ella was able to become the first Indian in program history to reach state as she took 25th place with a 170.

“It was just kind of sad because I just went by myself last year,” Ella laughed. “It’s way more fun [going to state together] as a team. Even if we did badly; it’s fine because we went to state. That’s the best part.”

Pattengill agreed with Ella’s statement as she felt like the team bonded more heading into the state tournament. “Going to state made it feel like we went as a family. This team is a family to me.”

Even though Taryn had prior experience at the state tournament, she knew the competition of being in Class 2 at Jackson was going to be better than what she faced in Class 1 at Notre Dame.

That competition included the now four-time reigning Class 2 State Champions St. Joseph’s Academy, which won the meet with a score of 607. All five of the team’s golfers garnered all-state honors as four even placed in the top 10.

The Indians went up against St. Joseph’s in the Class 2 Sectional 1 Tournament to advance to state as the Angels won with a score of 305 to Jackson’s 339. All five of St. Joseph’s golfers placed in the top 10 again while Rhodes and Ella did so as well.

“You just have to relax, and I think everyone knew that coming in because we all have played competition golf —we all knew how to play our best game,” Taryn said.

Jackson’s fifth and final golfer was freshman Maggie Davey, who finished in 87th place with a score of 211 as she scored 100 on day one and 111 to follow.

When asked what the most difficult part about state was this year, each golfer replied immediately with, “Wind!” The Indians said winds were blowing at least more than 20 miles per hour, which made for curved shots and plenty of resistance.

Jackson said it had yet to deal with such windy conditions this season and because the course at Silo Ridge Golf and Country Club in Bolivar was so flat, the wind had an even bigger impact.

“The course [at Jackson] is pretty undulated — trees are blocking all directions,” Taryn said. Rhodes added there were basically no trees at state except for the holes on the back nine.

Taryn said she believed she and the rest of the team could have played better to end the year, which was the worst part of Jackson’s experience after being able to place third. Taryn said that is just how it is after every tournament, but she’s looking forward to what this team can accomplish with Ella, Rhodes, Pattengill and Davey returning.

Rhodes admitted she had a rough time on the course during day one where she finished with a 90. Rhodes said she was unable to find her swing, but she knew she had to enter day two with a positive attitude.

“I just had to forget about it,” Rhodes said. “Coach [Carrie Korbecki] told me to show the course who was boss, and that’s what I tried to do.”

Another unforeseen element at state were several dogs roaming the course on both days. Korbecki makes sure to supply her team with plenty of snacks while they golf, and the players were feeding the dogs. One of the dogs ended up stealing Rhodes’ ball on the 17th hole and took it into a sandbunker to play with.

Even though Jackson did not win the state championship, the Indians all felt like they had won with their third-place finish. When Jackson went up to the podium to receive its plaque, Pattengill recalled hearing people say, “Oh, who is Jackson?”

“Especially just being a public school and being the top one out there because both St. Joseph’s and Notre Dame de Sion are both top-recruiting programs,” Taryn said. “That’s tough to beat, so in our heads we won. We weren’t even considering them.”

Rhodes agreed with this statement by adding that taking home a state trophy, “was one of those moments where you couldn’t wipe the smile off of any of our faces.”

Jackson finished the regular season undefeated in each meet it played while taking first in the Rockwood Summit and Webster Groves Tournament, while finishing third behind first-place St. Joseph’s at the Angel Classic.

Rhodes was able to place third overall in the tournament with a 73, while the Overstreet sisters tied for sixth place at 76.

The Indians went on to win the Class 2 District 1 Tournament Championship for the first time in history by three points at 321 as Rhodes walked away as the individual district champion with a score of 71.

“It was one of those feelings where you felt everybody was happy for you, and you were happy for everyone else,” Rhodes said. “There’s always little competitions you have with your teammates, but everybody worked together.

“Before we had the Angel Classic and I shot pretty decent there and got third, and then everybody was like, ‘Who is this?’ I had never really played well in a big tournament, so knowing that four of St. Joseph’s girls had shot under [par] it was like, ‘OK. I can do that, too.’”

Taryn and Ella also placed in the top 10 at districts as they finished fifth and sixth respectively with scores of 78 and 79. Pattengill finished 16th overall with a 93, while Davey took 31st at 104.

“I think that was the craziest just how happy we all were just knowing we won districts,” Taryn said. “That’s a pretty big title because sectionals is like, ‘Who’s going to get to state?’ Districts is an actual championship, and you get an award. Knowing we could do that gave us confidence going to state.”

All of these girls are still spending time golfing together and hanging out in general because they do not want this experience to end.