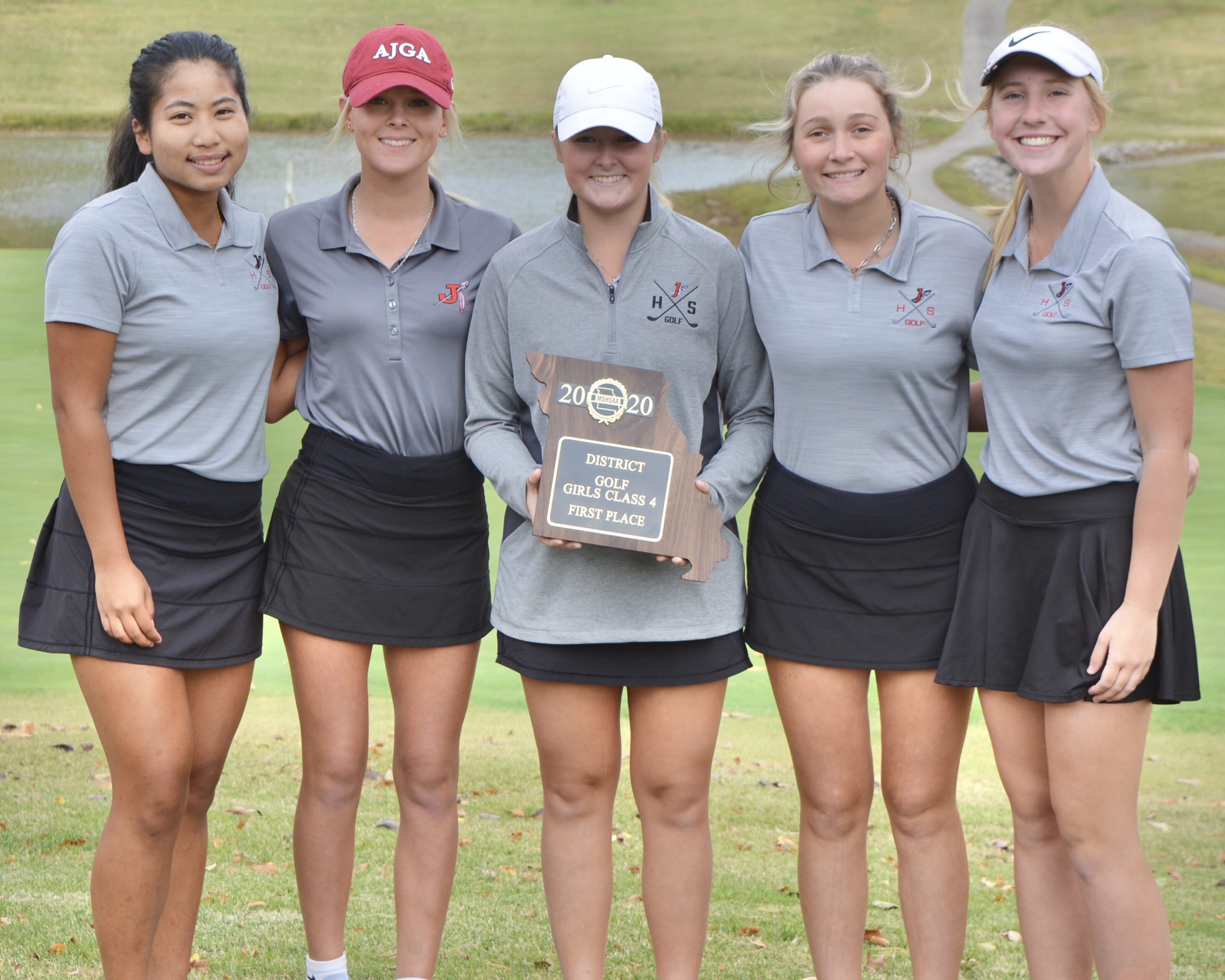 For the second-straight season, the Jackson girls golf team came away with a district championship last week as the Indians recorded an overall team score of 350 to do so.

The Indians won Class 2 District 1 last season as MSHSAA expanded girls golf to have four classes this year, so this was the Indians first Class 4 District 1 title in the program’s fourth year of existence.

“We are really proud of the girls for taking a second, first-place district championship trophy home to Jackson,” Jackson head coach Carrie Korbecki said. “Hopefully the community is also feeling proud of the girls as well. We kind of battled some tough course conditions and adversity that day, so it was a big win for us.”

The district tournament was originally set to be held at Quail Creek Golf Club in St. Louis, which the Indians had played at several times last season. This host site was changed a few days before to Oak Valley Golf Course in Pevely.

Jackson was able to have a practice run on the course before the tournament. Coach Korbecki described the course as a hilly one with lots of walking.

“The conditions of the course were not necessarily the best,” Korbecki said. “I wouldn’t say that is an excuse for the girls’ golf game, but there were large dirt gashes in the fairway and things that did make it a little more challenging to play compared to playing at our home course that’s in great shape.”

Nonetheless, Jackson had a total of four golfers earn all-district honors as two of them placed in the top three.

Rhodes won last year’s C2D1 Individual Championship, but she finished five over par and was one stroke behind Lafayette senior Brooke Biermann at this year’s district tournament. Biermann was last year’s Class 2 State Champion and has already verbally committed to play at Michigan State.

As a team, Lafayette finished second overall behind Jackson by six strokes at 356 as the Lancers had their four scorers place in the top 15 with three inside the top 10.

“Honestly, I think we probably could’ve shot better than we did and have that competition not be quite as close,” Coach Korbecki said. “It was a good motivator, and I don’t think some of us necessarily realized the ability some of the girls had on their team.

“Obviously we knew Brooke Biermann was going to be a threat to us, and that’s who Kaydi Rhodes played with. [Rhodes] handled Brooke like a champ by focusing on her golf game that day. She played the best she could and did a great job handling that situation.”

The final two Indians to earn all-district accolades by placing in the top 15 were none other than junior Jacie Pattengill and sophomore Maggie Davey. Pattengill hit a 94 to tie for 10th overall with Kirkwood junior Riley Forinash, while Davey finished in a four-way tie for 15th place at 101.

Even though her final score wasn’t counted towards Jackson’s total of 350, junior Kasie Saysanan finished with a 108 to take 21st overall.

Jackson is now trying to make history once again in this year’s Class 4 State Tournament after the Indians finished third overall in Class 2 last season, which was the team’s first top-four finish in program history. The state tournament was held Monday and Tuesday at Dalhousie Golf Club in Cape Girardeau.

“I think they are excited to be playing back home and being able to have the community come out and support them,” Coach Korbecki said. “I think that’s going to help them play their best because they’re going to want to make their family and their friends, who are coming out to support, proud.”

Rhodes and Overstreet both earned Class 2 All-State honors last season as they each tied for 21st place with scores of 168. Current Drury golf player and 2020 graduate Taryn Overstreet placed the highest for Jackson at 18th overall with a score of 166 at state last year. Pattengill placed 63rd overall with a 191 while Davey finished in 87th place at 211.

Ella Overstreet was the first Indian to reach state and earn all-state honors in program history during her freshman season when she took 25th (170) in the 2018 Class 2 State Tournament.