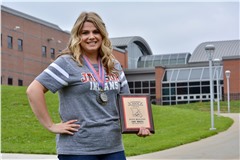 For high school athletes, balancing schoolwork and being involved in a sport can be challenging, but Jackson senior swimmer Cami Brazel made it look effortless.

Not only did Brazel finish her career with the Indians swimming and diving team as a three-time Class 2 state qualifier, but she also became the first National Interscholastic Swimming Coaches Association Academic All-American in school history.

“It was really, really exciting for me personally because I swam since I was five, so I’ve put a lot of time into it,” Brazel said. “It was really cool to see not only the hours I put into it mattered but then also the academic aspect all together.”

There are over 340,000 students involved in high school aquatics throughout the nation, and approximately 2% of these athletes are recognized as All Americans.

Students qualify for this honor by having a minimum 3.750 GPA on a 4-point scale or 93.7500% of the grade scale a school uses for seven semesters or 11 trimesters. Athletes must also be graduating seniors and have lettered in swimming, diving or water polo their senior year.

On top of being a student athlete at Jackson, Brazel attended bible study at 6:30 a.m. every single morning before school. She was also involved in things such as choir, FBLA, FCCA, J-Crue, Cool Kids Against Bullying, is a youth group leader at her church and was on the Library Teen Advisory Group.

“It took a lot of work to figure out the perfect balance of it, but my last few years especially I’ve been able to balance it pretty well between family, school and also church,” Brazel explained. “Church is very important to me to be involved with my youth group and going to Wednesday night activities.”

As if she didn’t already have enough on her schedule, Brazel works at John’s Pharmacy in Cape Girardeau as a deliverer and also helps with curbside service.

Brazel will be attending Brigham Young University–Idaho with hopes of attending pharmacy school in the future. While working at a pharmacy, she has been intrigued by learning the ins and outs of the business as well as meeting new people.

Pharmacies are one of the essential businesses that have remained open through the coronavirus pandemic, and Brazel is glad she has been able to help play a pivotal role in the community.

“It makes me feel happy that I can help other people because if I were older or sick, I would want someone to be able to do the same thing for me,” Brazel said. “A lot of them are very appreciative, and it makes me really happy to be able to help them and know that I’m helping them try to keep safe.”

Just like she is preparing for a career in pharmacy now, Brazel was one of the Jackson swim team’s managers when she was in eighth grade. This allowed Brazel to get to know her future teammates as well as what the competition would be like in high school.

Brazel said whenever her parents wanted her to learn how to swim that she instantly fell in love with the sport and starting swimming in club leagues year round. One aspect Brazel loved about swimming was the friendships she was able to make in the sport.

“You are with these people all the time,” Brazel joked. “Multiple hours a day, so you really get to make those friendships and connections with people. There’s also so many things I’ve learned from [swimming] like time management, how to work hard and that working hard pays off.”

Teammates who have helped Brazel learn these traits and become good friends of hers include Faith Littleton, who now swims for Southern Connecticut State University, Hannah Summers and Kailey Bell. Brazel said she has basically grown up with these three since they have been swimming together since they were five.

Brazel, Littleton, Bell and Summers were able to compete at state together as members of the 400 freestyle relay team, while Brazel has also qualified for state as a member of the 200 medley relay team.

“You understand what [your teammate] is trying to balance, and you know how much time you put into this sport and how much effort it requires,” Brazel said. “You’re able to use each other to help better yourself.”

Something Brazel will remember the most about her swimming career — besides being able to spend ample time with her teammates — was qualifying for state at the annual SEMO Conference Meet. “We looked up at the scoreboard and realized that we were probably [going to state]. Just that moment of jumping up and down and tears and hugs really stood out to me,” Brazel said.

Brazel is also thankful for how supportive her family and coaches have been throughout her career as a swimmer. She described many weekends spent in hotel rooms, and her parents were with her every step of the way.

“[My parents] always pushed me to keep pushing through, even in the challenging or disappointing moments,” Brazel said. “My grandparents attended every meet they could, sitting on the pool deck for hours at a time to watch me compete for a few minutes. All of coaches, especially my high school coach Cailin McGinnis, have been a constant support system and played a big role in helping me reach where I am today.”

One of the reasons why Brazel is as dedicated as she is in academics is because of her parents instilling the importance of school into her mindset at a young age. For Brazel, academics always came before swimming because she knew how she did in school would get her somewhere in life.

Brazel said she enjoys every subject in school and pointed out reading, language arts and especially history as being some of her favorites. Brazel is fond of history because she likes learning about the past and seeing how events play out.

Brazel and every other senior in Missouri had their final year of high school cut short as Gov. Mike Parson ordered schools to be closed the remainder of the year in April due to the pandemic. The school year is officially over, but Jackson still hopes to host prom and graduation with tentative dates set for June 13 and 19, respectively.

“It’s definitely been hard, but I’ve been able to talk with my friends about it and the school has done an amazing job of trying to provide us the last things we’ve missed out on,” Brazel said. “We got to come and do our senior handprints upstairs. While it’s really upsetting, I also feel like it’s a blessing in disguise because I’m going 2,000 miles away for school, so I’ve spent these last extra few months with my family.”

During her time away from school, Brazel and her family have been able to go on hikes as well as visit their cabin on several occasions. Brazel has also even been able to see her grandparents a few times whenever they are outside. “Even though I’m working, I still have all these extra moments that I wouldn’t have gotten if [the pandemic] hadn’t happened,” Brazel said.