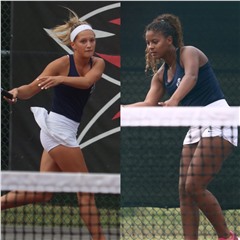 When Saxony Lutheran seniors Megan Benkendorf, Maddox Murphy, Skyler Soto and Sydney Turner were freshman, girls tennis was not offered at their school. Fast forward to this fall and each of them are now playing at the varsity level.

Saxony girls tennis began back in 2018 as the team was only able to have a junior varsity schedule until last season. Now the Crusaders (3-7) are hoping to make a push in the district tournament after reaching the Class 1 District 2 semifinals last season.

Last Thursday, the Crusaders hosted Kennett for Senior Day at the Southeast Missouri State Redhawks Tennis Complex since Saxony does not have tennis courts of its own yet. The program has to pay in order to use SEMO’s facilities, but doing this has been beneficial for Saxony in several ways.

Saxony no longer has to wait for Jackson’s girls tennis team to finish practicing at the City Park like it had to back in 2018 so the Crusaders could begin their own practice. “We wouldn’t get done with practice until like 7 p.m., so I like being able to come here right after school and the courts are really nice,” Turner said.

Another perk of practicing at the Redhawks Tennis Complex is the fact Saxony players have gotten to know and learn from SEMO’s women tennis players.

“We’ve been doing a lot of doubles stuff right now, and it’s helped us so much because they know so much about the game,” Murphy said. “So we’re learning all the time. There’s been a couple times where Syd and I have been a little bit overwhelmed, but we’re getting there, and I think we’ve made a lot of improvement.”

Murphy and Turner are doubles teammates since they are the top-two players for the Crusaders this year. Some of the things Murphy believes her and Turner have improved on is being more aggressive at the net, which she said is the “biggest thing” when it comes to tennis.

“You start out [playing tennis] and it’s a little scary at first, but I think we’ve both gotten a lot more confident in ourselves and our game,” Murphy said. “That just makes it more fun because we really have competed with a lot of teams. Whether the scores necessarily show it in each game or not, I think we’ve done pretty well.”

Turner has worked herself all the way up to be Saxony’s No. 1 now from being No. 8 her sophomore year. Turner did so by training extensively over the summer prior to her junior campaign as she focused on aspects like ball placement and consistency.

Turner is a three-sport athlete for the Crusaders as she also plays basketball in the winter and soccer during spring. As a member of the starting five, Turner helped Saxony’s girls basketball team win an eighth-straight district championship and reach the quarterfinals for the seventh year in a row this past winter season.

“I feel like tennis is really a mental sport because it’s just you focusing — it’s not all about the other team because if you mess up, you lose the point,” Turner said. “You just have to make every shot count.”

Murphy is also a member of Saxony’s basketball team and has actually committed to play collegiately at Columbia College. Last winter, Murphy finished as the Crusaders third-leading scorer (6.8 points per game), third in steals (1.4 per game), first in free-throw percentage (82%) and was second in 3-point percentage (31%; minimum of 60 attempts).

“Honestly, I can kind of play [tennis] care free — I don’t have anything to lose,” Murphy explained. “It’s just fun to go out there and play with all of my friends. It’s a lot more chill than basketball is for sure, but I like it a lot.”

While Murphy and Turner have been able to create a close friendship through tennis, the two are also very competitive against each other on the court. Saxony’s first-year head coach Amy Birk said every time she has had Murphy and Turner face off, the other one has won.

“[Murphy and Turner] are so evenly matched — they are very, very close in abilities,” Coach Birk said. “Maddox was my No. 1 for the first half of the season, but Sydney just beat her out. They have lots of fun together, and I know they love to play doubles together.”

With this being Birk’s first year as a high school tennis coach, seniors like Benkendorf and Soto have helped her learn how high school matches and tournaments are ran. Birk’s past experiences with tennis include teaching the sport in her physical education class for 18 years and playing over the summers with friends.

Saxony has three matches this week before districts begin on Saturday. The Crusaders are in Class 1 District 3 this season along with teams such as Arcadia Valley (3-8), Fredericktown (1-8) and North County (11-0).

“It’s definitely a little bittersweet — it’s kind of like the first of many lasts,” Murphy said. “I love this sport and it’s been a lot of fun, so I hope we can go further than we did last year. That’s something we’re all really shooting for is to make a name for Saxony and our tennis program.”