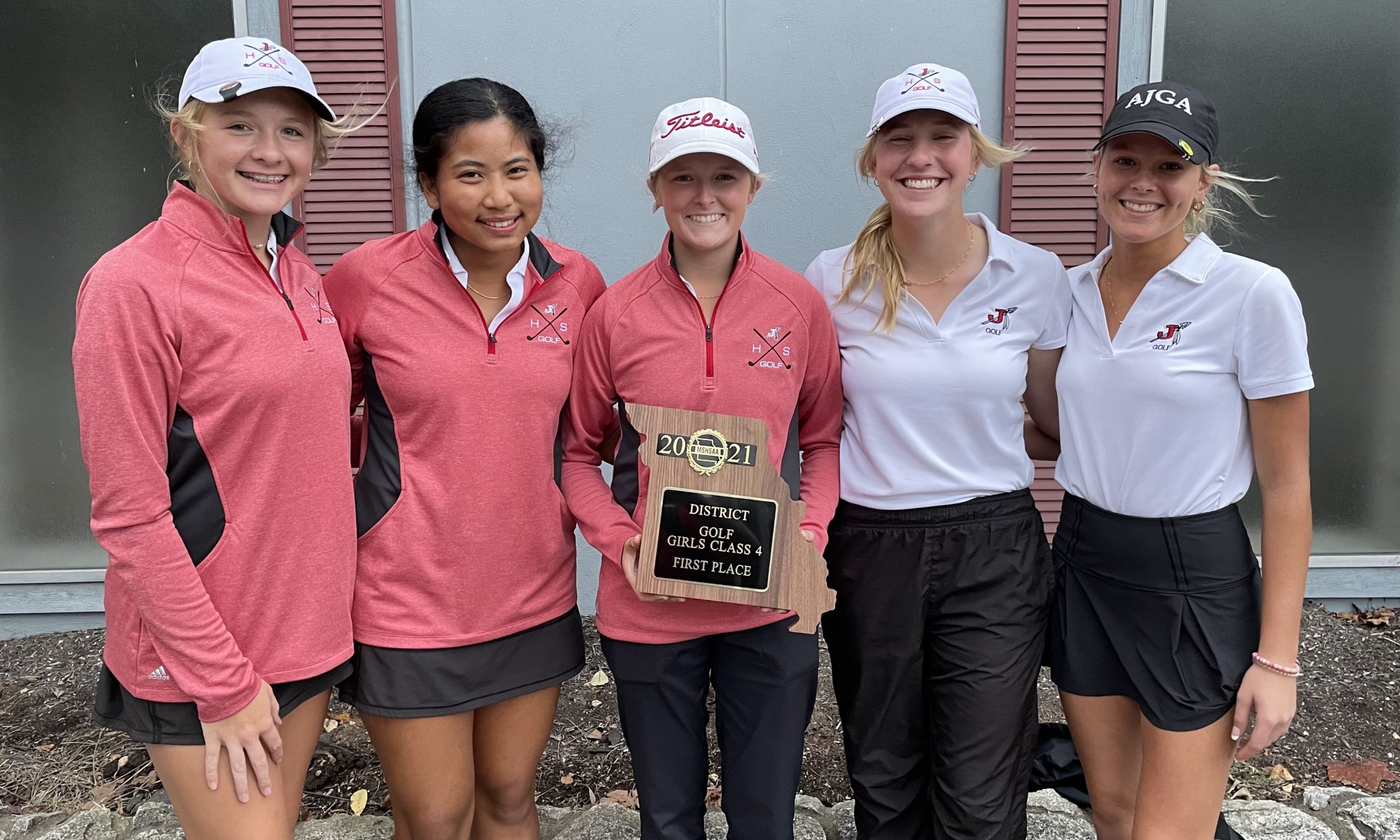 For the first time in the program’s short history, the Jackson girls golf team won a third-straight district championship last week. The Indians won the Class 4 District 1 Tournament with a team score of 326 as three of their golfers placed in the top five.

Jackson won the district title by 16 strokes as the runner-up was Lafayette with 342 points, while Cor Jesu took third with 351 and Notre Dame fourth at 377.

“I think [winning districts for the third year in a row] is something they expected, and something they had as a goal for the team,” Jackson head coach Jim Brady said. “It’s only really step one for them, and I know step two is to post a good score [at state] and step three is to bring it all home.

“With something like an individual sport like golf, they all look at each other, though, as one. They are one score together — they are that final score on Monday and Tuesday. When they’re able to hang out with each other outside of golf and school and want to do things together, that’s massive. When golf comes around, they can lean on each other for help.”

Two of them were none other than Jackson’s dominant senior duo made up by Ella Overstreet and Kaydi Rhodes, who both finished hiting seven over par with a 79 to tie for second place. These two have placed either first or second in each competition for the Indians so far this season.

“They want to beat each other — it’s always a friendly competition between both of them, but at the same time they want to lead their team,” Coach Brady said. “They want to set a tone for the team. With terrible conditions [at districts], they came out and fired good numbers.”

The third and final golfer for Jackson to place in the top five and earn all-district honors was sophomore Alana Gilbert, who tied for fifth place with Lindbergh freshman Reese Reinhardt as they each hit a 82.

“She’s just stepped up and taken the bull by the horns. I don’t know if she thought she was going to be playing as well as she has,” Coach Brady said. “I definitely saw it in her at the beginning of the year, but she’s been a huge bright spot and huge plus to have Alana step up and post great numbers like she has been.”

The next two Indians who also qualified for this year’s Class 4 State Tournament didn’t manage to place in the top 10, but they were still in the top 15 as senior Jacie Pattengill tied for 11th place with a 86. Fellow Jackson senior Kasie Saysanan ended up finishing in a three-way tie for 14th place by hitting a 92.

“They’ve been solid all year. They’ve gone out and posted good numbers pretty much in every tournament we’ve played in,” Coach Brady said. “They’ve been right there counting towards our team score all year long, and it’s a bonus to have four seniors [at state]. They’ve all had a chance to play in big competition.”

The biggest key for Jackson in hopes of winning a state championship this week will be the fact that five of their golfers qualified individually for the state tournament. All of a team’s golfers don’t reach state just because it won districts.

“[All five of our golfers qualifying for state is] massive. It kind of relieves some of our players and there’s less tension when they have the possibility of, ‘Hey, if my score doesn’t count it’s no big deal,’” Coach Brady said. “They know, ‘I’m going to get picked up by my other teammates, and I’ll go post a good score the next day.’ That’s a huge sigh of relief for a lot of our girls.

“They’re all going to compete against each other, but at the same time if somebody posts a better score, it’s a congratulations for them and move on to the next step. It’s a huge thing to have all five rather than just relying on four girls.”

Another component to success for Jackson has been the fact the Indians have competed in multiple out-of-town tournaments. Last season because of the coronavirus pandemic, Jackson hardly did so until the postseason.

“No. 1, it’s nothing against Southeast Missouri because you see Notre Dame posting great scores. It’s just about being able to play other competition within the state,” Coach Brady explained. “Playing other golf courses, playing big-time golf and playing 18 holes at different locations. … It’s a massive thing to be able to play great competition.”

On top of placing fourth overall, the Bulldogs had three golfers qualify for state in junior Paige Compardo, freshmen Eliza Barnette and Silvia Schalberger. Com-pardo placed in the top 10 at seventh overall with a 83, while Barnette and Schal-berger tied for 17th place as each hit a 93.