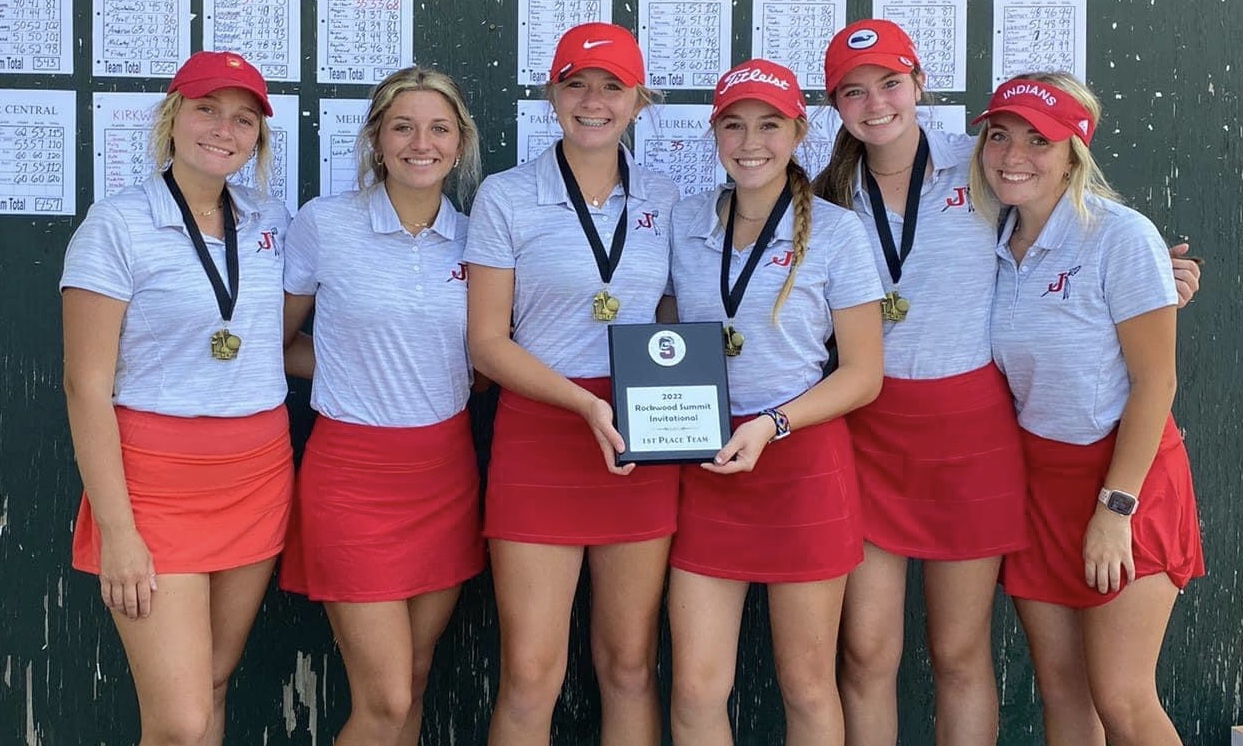 After graduating three current college golfers from the 2021 Class 4 third-place team, the players on this year’s Jackson girls golf team knew things would be a little different.

However, record wise, it’s been business as usual for an Indians program that has only been in existence since 2017. Last week, Jackson won what was its third-straight tournament championship by taking first in the Rockwood Summit Invitational.

“This team has put in so much hard work, and I really think it’s starting to show,” junior Alana Gilbert said. “Winning three tournaments in a row is such a good feeling because you go into the first tournament, and you’re always like, ‘I don’t know how this is going to go.’ You don’t know how the other teams are going to play.”

The Indians claimed the Rockwood Invitational title with a team score of 308 as Gilbert — The Phenom — won the individual championship with a score of 68. In last year’s Class 4 State Meet (her first-ever appearance), Gilbert produced Jackson’s third-highest finish by taking 17th overall with a 162.

As a sophomore at state, Gilbert finished two places and one point behind 2022 graduate Ella Overstreet, who now plays golf at Southern Illinois. Taking the top spot at state for the Indians last fall was current Tennessee Tech Golden Eagle Kaydi Rhodes as she scored a 152 to take fifth place, which is Jackson’s best individual finish at state.

“I had to work really hard this summer, and we do a bunch of summer practices to try to get the young ones used to the team and everything,” Gilbert said. “We have really high expectations from last year, and I think we’re still meeting those expectations. Even with this young of a team, I think we’re doing a really good job of that.”

Finishing behind Gilbert for Jackson at the Rockwood Invitational was senior Maggie Davey with a 76, while freshman Julia Schlitt and senior Harper Ready rounded out their team’s total with scores of 81 and 83, respectively.

“It’s nice to have competition because we have more motivation,” Davey said. “With Kaydi and Ella, it was always like, ‘Oh, we’re bound to win because Kaydi and Ella are just so good.’ Now we have to work for it, and it’s actually kind of fun. I like it.”

The Indians tournament-winning streak ended there, though, as the next day they took second at the Angel Classic to the six-time defending state champions St. Joseph’s Academy. Jackson did so with a team score of 327 to the Angels final total of 305.

Individually, Gilbert took second overall with a 70 to Angels senior Rylie Andrews score of 69. At last year’s state meet, Andrews finished nine spots ahead of Gilbert in eighth place with a two-day score of 154 to Alana’s 162.

Schlitt came up with the Indians second-best score of the day as she shot a 82, while Davey finished two points behind her at 84. The fourth and final score to go toward Jackson’s total of 327 was from Ready, who shot a 91.

“We feel great right now because we’re meeting expectations even with this younger team,” Gilbert said. “Even though we got second at the Angel Classic, we went in there thinking, ‘If we beat St. Joseph’s, it’s going to be the best day of our lives.’”

Prior to the Rockwood Summit Invitational, the Indians claimed the Lindbergh Invitational Championship by posting a team score of 317. Gilbert tied for second place in the invitational with an individual score of 69 as Mehlville freshman Eva Brown won with a 65.

Davey recorded the second-highest score for Jackson with a 78 as Schlitt paced Maggie at 79. Coming in fourth behind these three was junior Grace Hightower, who shot a 91.

Taking over as the team’s head coach this season has been Jeff Fahrner, who wasn’t on staff last year. Jackson has now had a different person at the helm for the last three seasons. After the Indians won their first tournament, Gilbert and Davey said in unison, “He was so happy!”

“This is a fantastic group of girls — absolutely fantastic,” Coach Fahrner said. “I love being around them everyday, and they bring so much positive energy. They’re all really rising to the occasion this year.”

The first tournament Jackson won was the Webster Groves Scramble with a score of 230 as the duo of Gilbert and Davey finished fourth overall with a combined score of 70. Gilbert and Davey are practice partners and have since been the beginning of the year.

“That was fun because we’ve never scrambled before, and now we’re always partners when everyone splits up,” Gilbert said. “I think we worked really well as a team, and I really enjoyed it. If one of us hits a bad shot, the other will always hit a good shot.”

Another way these two golfers help each other out is with pep talks — “A lot,” Davey added. Maggie has been a member of the varsity squad ever since her freshman year.

“[Davey] has a great mental game and tries to stay positive because golf is all mental. You’ve gotta be able to recover and forget about the last hole because it’s in the past. All you can do is focus on the next hole.”

Davey added that, “[Gilbert] motivates me because she’s so good. It’s awesome to see her grow from when she was a freshman, and she’s shooting under par now.”

Heading into the second half of the season, Gilbert and company said they are starting to prepare and buckle down for state. “I think our one goal is to eventually beat St. Joseph’s.”

Jackson will indeed play St. Joseph’s again before the state meet as both teams are in Class 4 District 1. The Indians have won three-straight district championships as the Angels were in District 2 during that span.