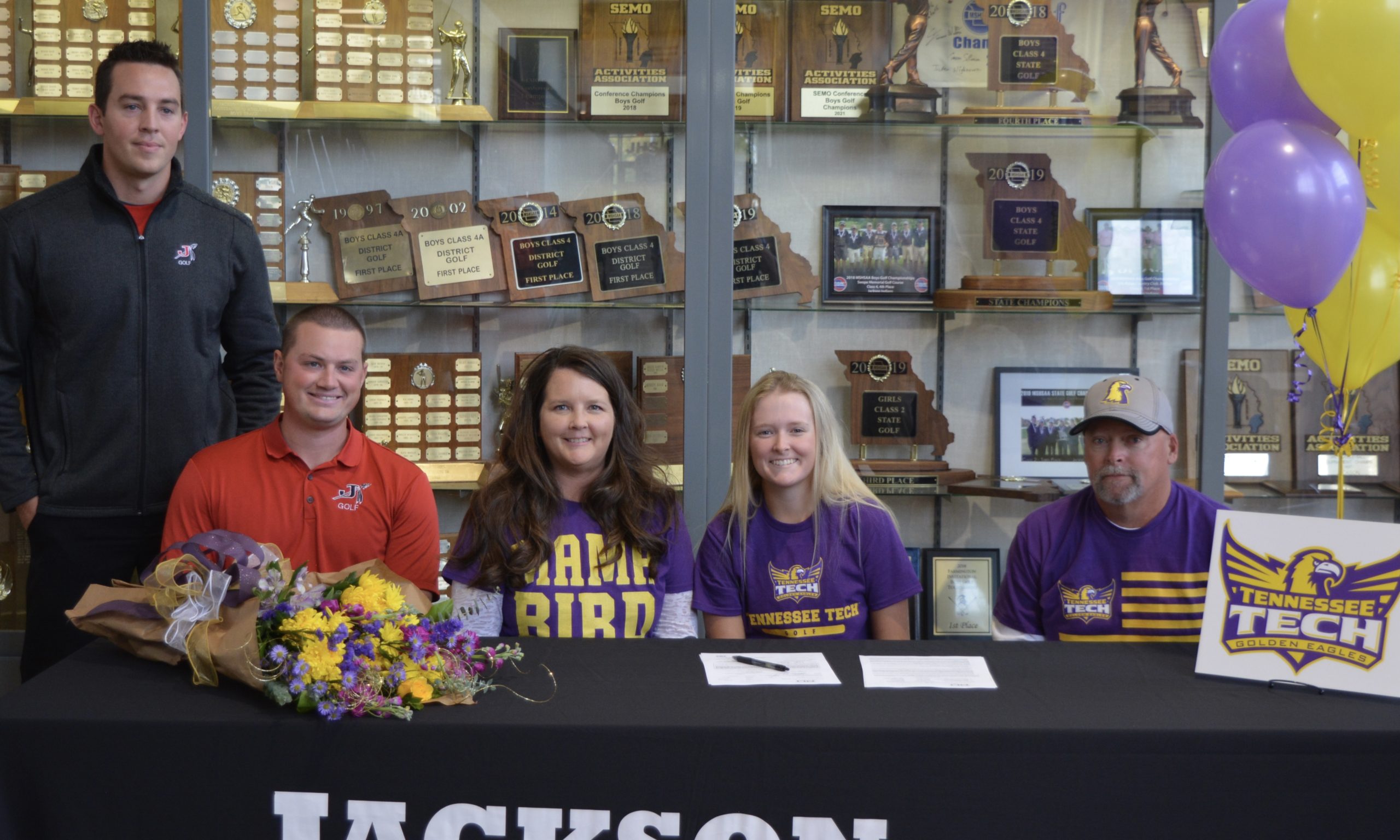 Ever since Jackson senior Kaydi Rhodes was five-years-old, she has been on a golf course. Therefore, it should come to no one’s surprise that she will continue to be on the green in college.

The reason why Rhodes started being around the sport at such a young age was because of her father Steven, who would have Kaydi watch him and his friends play. “I eventually picked up a club,” Rhodes joked.

“After he came out of the military, he started working on the golf course, so then I was just there even more,” Rhodes said. “It was just bound to happen. … Probably when I was around 10 is when I started playing competitively.”

Rhodes, who fielded numerous offers to play college golf, signed her national letter of intent with Division-I member Tennessee Tech earlier this month. Kaydi did so after spending the last four years making history as one of the pioneers for the Jackson girls golf program.

“My freshman year when we won our first 18-hole tournament — I still remember the smiles on our faces after we got on the bus and when we get home, it never left. It’s just stuff you’ll never forget.”

Not only was Rhodes the first-ever individual district champion for the Indians, but she also led the program to its first two final-four finishes and first three district titles. Kaydi capped off her career by leading Jackson to take third at this year’s Class 4 State Tournament by placing fifth overall, which is the highest individual finish ever at state for the Indians.

“I know we all wanted this year something better than the third-place plaque, but we were all super excited that we had the opportunity to go show what Jackson is about,” Rhodes said. “When we found out on that second day that we secured a plaque, it was a moment that won’t be forgotten.”

Rhodes said she is simply grateful to have the opportunity to play golf at Tennessee Tech because only around 2% of high school athletes sign with a D-I program. The main reason why Rhodes signed with the Golden Eagles is because of head coach Amanda Smith.

“She and I just instantly had a connection. We had a lot of similarities,” Rhodes said. “She played golf, and we both came from Jackson High School. It was just right off the bat we connected, so I felt like Tennessee Tech was the place I was going to flourish and grow.”

What Rhodes enjoys the most about golf is the mental aspect of the game and that one has to be mentally tough in order to have success like she has had.

“Yes, the shot you’re taking counts, but it’s the next one that counts more,” Rhodes said. “It’s just really hard — you have to be very mentally tough to keep playing the game, stay in the moment and go hit the next shot no matter where it goes.”

Rhodes works on her mental toughness and game year round as she plays in tournaments throughout the summer all over the country
“as fast as I can get to them,” she stated. Rhodes said there was a two-week period last summer where she wasn’t at home at all.

“It can be very stressful — it’s a lot. But it’s memories, and I’m just blessed to be able to do this,” Kaydi said. “There’s a lot of people that want to try and be golfers, and they realize how hard it gets.”

Rhodes said her strengths on the golf course vary throughout a season, for example there will be a month that goes by where she won’t miss the fairway with a driver. Then there’ll be another month where she’s hitting every green in regulation and putting the ball to 10-feet, or where she won’t miss any of her puts.

“It’s very hot and cold, but I’d say the thing I’m most solid with is off the tee. I work on my driver a lot,” Rhodes said. “I work on putting, too. Statistically putting matters, but in the PGA Tour there’s more strokes gained off the tee than there is on the green. Putting it in the fairway is a big advantage.”

Rhodes will be majoring in exercise physiology with a minor in psychology.