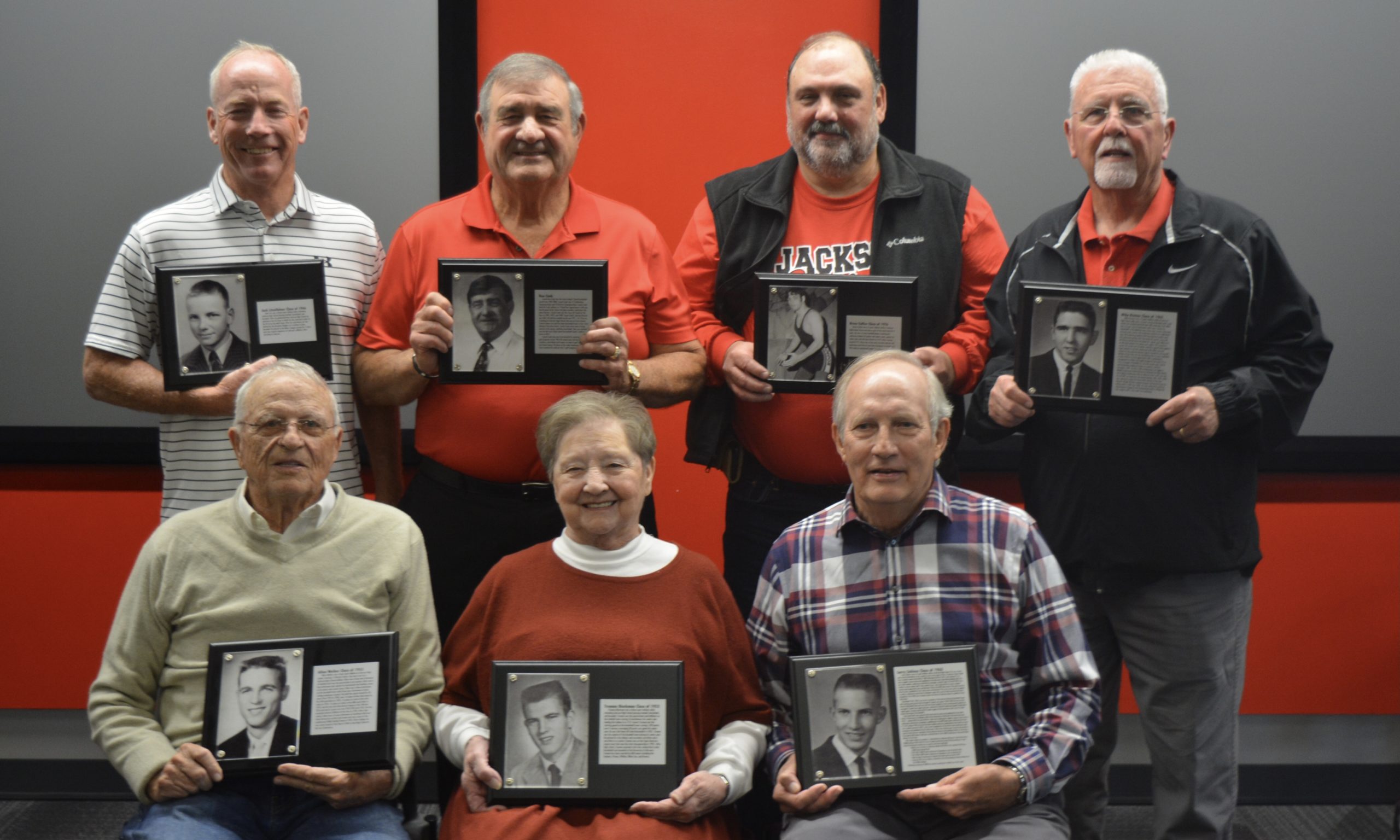 The Jackson R-2 School District honored its second-ever athletic hall of fame class last Friday night at The Pit. There was a banquet held prior to the football team’s regular-season finale, where each hall of fame inductee was announced and recognized at halftime.

Jackson’s hall of fame members are selected by a 15-person committee, which will always include the current Jackson principal, athletic or assistant athletic director, at least one member appointed by the Tribal Council Booster Club, current and former Jackson coaches and alumni.

“It’s an honor to be able to recognize these individuals — we know we have a lot of ground that we need to cover since this is only our second year,” Jackson R-2 Chief Marketing and Communications Director Meredith Pobst said. “We’re going to do our best to take nominations from the community. … If anyone has someone they would like to nominate, they can call the Board of Education office, and they’ll give them an application or tell them how to make that happen.”

Individuals ranging from former athletes, coaches and individuals who have given praiseworthy service to any Jackson athletic program can be inducted. Athletes aren’t eligible until five years after they’ve graduated from Jackson. Teams that have won a state championship are automatically nominated, while teams placing in the top four at state are eligible.

“I think it’s outstanding to always be able to recognize those who have not only been excellent in a sport, but many of these people have given back to their community and been very strong in their academic walk while at Jackson High School,” Pobst said.

• Jack Litzelfelner (Class of 1946): Played baseball, basketball and football. Enlisted into the US Army; played for the US Army baseball team. Drafted by the Brooklyn Dodgers after that and played in the minor leagues for seven years.

• Truman Blackman (Class of 1953): Played baseball, basketball and football. Scored 16 touchdown his senior year when the football team went 7-2-1. Scored 1,429 career points on the basketball team and averaged 28 points per game his senior season. Second team all-state in basketball in 1953. Pitched a no hitter his senior year and was a member of the 1953 Cape American Legion state championship team. Continued his baseball and basketball career at Missouri.

• Allen Welker (Class of 1955): Played baseball, basketball, football and was on the track and field team. Earned 15 varsity letters, which is the most by any Jackson athlete ever. Three-time state champion in track and held the school sprint record for 40 years from 1955 to 1995. Continued his football and track career at Southeast Missouri State. Was a member of the 1955 Red-hawks team that went undefeated. After college, he was voted as the SAC Conference Coach of the Year in 1963while at Ava High School.

• Larry Schloss (Class of 1963): Ran cross country and track and field, and he was also a member of the basketball team. Was on Jackson’s first-ever cross country team in 1960. Two-time all-state runner in cross country while leading the team to win its first district championship in 1962. Named the SEMO Conference Track and Field Athlete of the Year in 1963. In basketball, he averaged 15 points per game his final two seasons and set the single-game scoring record (37 points) his senior year. Continued his cross country and track career at Southeast Missouri State. Coached at SEMO for three years after his collegiate career.

• Mike Kistner (Class of 1965): Played baseball, basketball and football. Earned all-state as a pitcher his senior year with a record of 10-2. To win the SEMO Conference Championship as a senior, he struck out 13 batters and hit a grand-slam home run. Was drafted as a free agent by the St. Louis Cardinals in 1965. Four-year starter at Murray State and helped the Racers win the 1967 Ohio Valley Conference Championship. Selected to play for Evansville, Indiana, in the Stan Musial College All-Star Summer League, where he led the team in batting average.

• Bruce Collier (Class of 1976): Played football and was on the wrestling and track and field teams. Was the first of Jackson’s 12 total state championship wrestlers in 1976, where he also recorded one of the program’s eight undefeated seasons at 29-0-1. Named all-state in football during his senior season in 1975 when the Indians finished 9-1 overall.

• Ron Cook (Coach from 1982-2003): In his 21-year career as the girls basketball team’s coach, he led the Indians to seven final four appearances (three second-place finishes, three third-place finishes and one fourth-place finish). Was a three-time Class 4 Coach of the Year (1995, 1997 and 1999). Finished with an overall coaching record of 446-143 at Jackson. Elected to the Missouri High School Basketball Coach’s Hall of Fame in 2012. Started the boys golf program back in the 1987-88 school year and had one team take seventh place at state during his 20 years coaching the team.

“There were so many names that made it really hard for that committee to choose,” Pobst said. “It’s neat that we’re going to be able to have their plaque posted in our high school, so that students for generations to come can remember and appreciate the work these men and women have done throughout the years — just not forget their legacy. We always say, ‘Once an Indian, always an Indian,’ and I think we see that here tonight.”