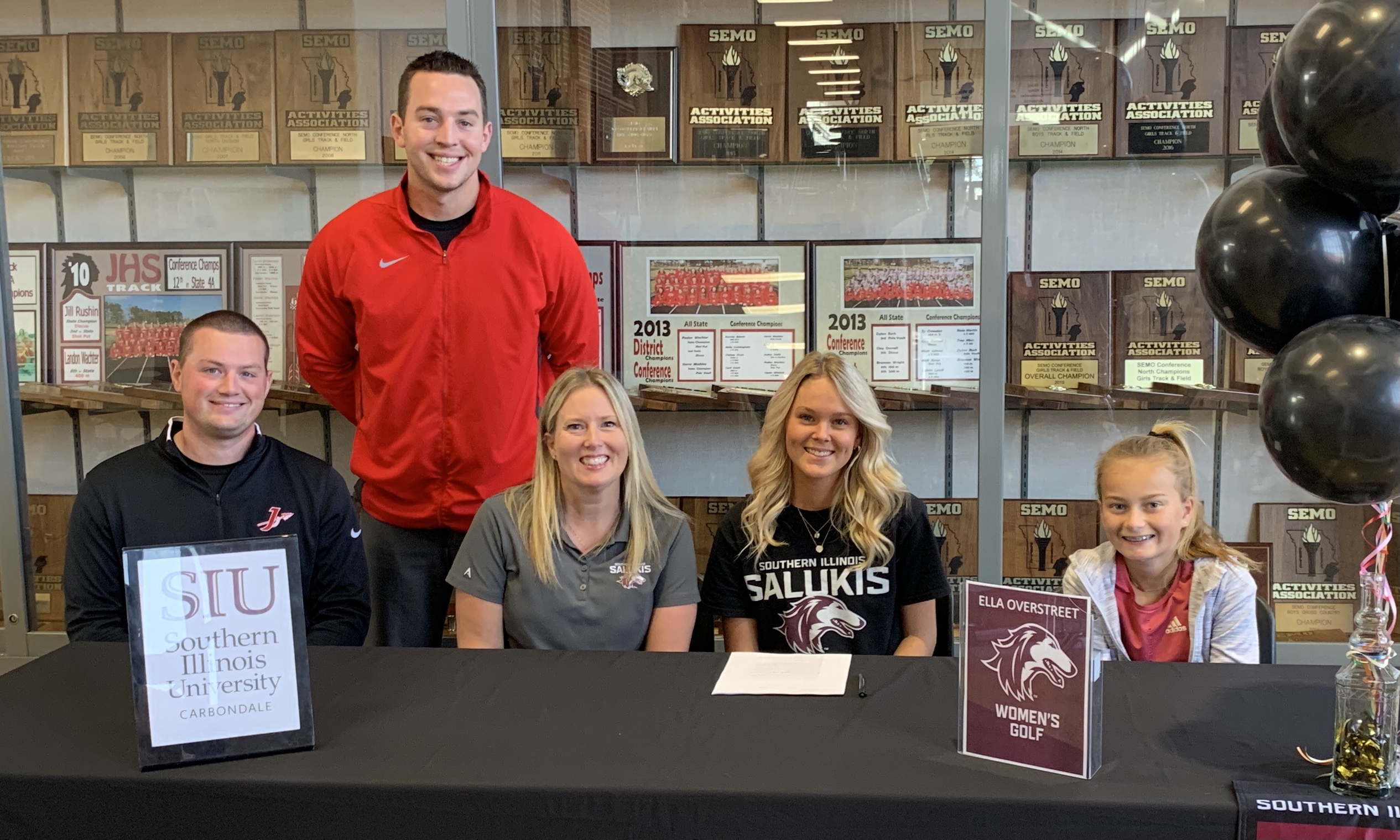 If one followed high school golf in Southeast Missouri, they wouldn’t be surprised by the fact that Jackson senior Ella Overstreet will be taking her talents to the next level.

Overstreet, who signed with Southern Illinois back in November, was a four-time state qualifier and helped the Indians bring home two third-place state trophies. Along with that, both of Ella’s older sisters play college golf.

“Overall, everybody says golf is boring, but I thought it was cool because I got to play with my siblings everyday, so it made it 10 times more fun,” Ella said. “We were really competitive, and I was a little bit younger than them, but once I got older we would make little bets.”

Growing up, Ella said she aspired to be like her sister Sarah Bell, who now golfs at Oral Roberts. Sarah went to Notre Dame and helped the Bulldogs win back-to-back Class 1 State Championships (2016 and 2017), while also winning two-straight individual state titles.

“Sarah just got golf right off the bat — she was just built for it,” Overstreet said. “It was so hard to go against her, but that’s what really pushed me to be good at golf. I would be like, ‘I want to be as good as Sarah one day.’ The competition was fierce, and we would play like every weekend together. I would never win, but now we’re all grown up, and I want to play them again.”

It became a realization for Ella that playing college golf was a possibility when Sarah starting receiving offers, which made her think, “I’m going to get mine, too.” SIU is the current home of former Jackson boys golfer Carsen Silliman (2021 graduate), who helped sell the university and golf program to her.

“Placement was a big factor for me, and I really like the school — it’s kind of a hidden gem to me,” Ella said. “The head coach [Danielle Kaufman] is amazing. Carsen is playing there now, and he really likes it there. He was the main person who persuaded me to go there, and the team is amazing. I just really like it there, and it was the best overall pick for me.”

Overstreet said that Sarah’s most desirable trait on the golf course is her short game, which Ella said is the whole component of golf. Ella said she is good at striking the ball since most her shots go straight down the middle, and she said she’s still improving her short game.

“Sarah would hit every bunker within two feet every time. I’m at the point where I’m good at it, but I want to be a lot better than I am,” Overstreet said. “She was really good at it in high school, and that’s what I think made her a really great golfer.”

Ella was going to golf at Notre Dame like Sarah, but her other older sister Taryn Overstreet (Drury) transferred from Notre Dame to Jackson, so the two could play together. Taryn was on both of Notre Dame’s state championship teams with Sarah.

Taryn had to sit out her junior season — Ella’s freshman year — due to transfer rules, but after that, these two helped lead the Indians to their first-ever final-four finish in 2019.

“It’s a really neat experience when you get to play with your sister, but also in tournaments you’re playing against her and trying to win and beat her,” Ella said.

On top of helping Jackson bring home two third-place state plaques, Overstreet was the program’s first-ever state qualifier her freshman season in 2018. Ella finished her career as a three-time all-state honoree by tying for 15th place with a score of 162 (80, 81) in the Class 4 State Tournament this fall.

Jackson didn’t have a golf program before Ella’s freshman season, so Overstreet, Rhodes and Pattengill will always be looked back on as three of the founders of the Indians girls golf program.

“The teamwork and all of us just helping each other when we would practice made our success possible,” Overstreet said. “We would ask each other questions, and we are all in the same boat by being decently good. One day, I didn’t have a good day and couldn’t find my bunker swing, and I asked Kaydi to help me. I helped my other teammates with their chipping and putting, so you just work together to get better. It was really nice taking third at state this last year because we just helped each other out and pushed through it.”

Overstreet said perhaps the most important aspect of golf is a player’s mental game. “You can blow it off and keep going, and golf takes a lot of thinking, too,” Ella said. “I realized that about two years ago because when I was younger I kind of just thought, ‘hit the ball.’ You have to focus on the wind and how far you need to hit it. Then you’re playing in either the heat or cold because it’s not an indoor sport, so it can be miserable.”

Ella is currently unsure of what she will major in at SIU, but she is certain that she wants to have a career in aviation. Overstreet has cousins that she looks up to who are Air Force pilots, and she has been taking basic flight classes at the Cape Girardeau Career & Technology Center.

“I’m trying to get my private pilot’s license, and then I’m going to keep on doing that while I’m in school when I have breaks,” Overstreet said. “SIU has an aviation program, but it would’ve been 70K more. Either I’m going to get my four years if I really like whatever I’m doing, and I could go with that, or I could go into the military and fly planes.”