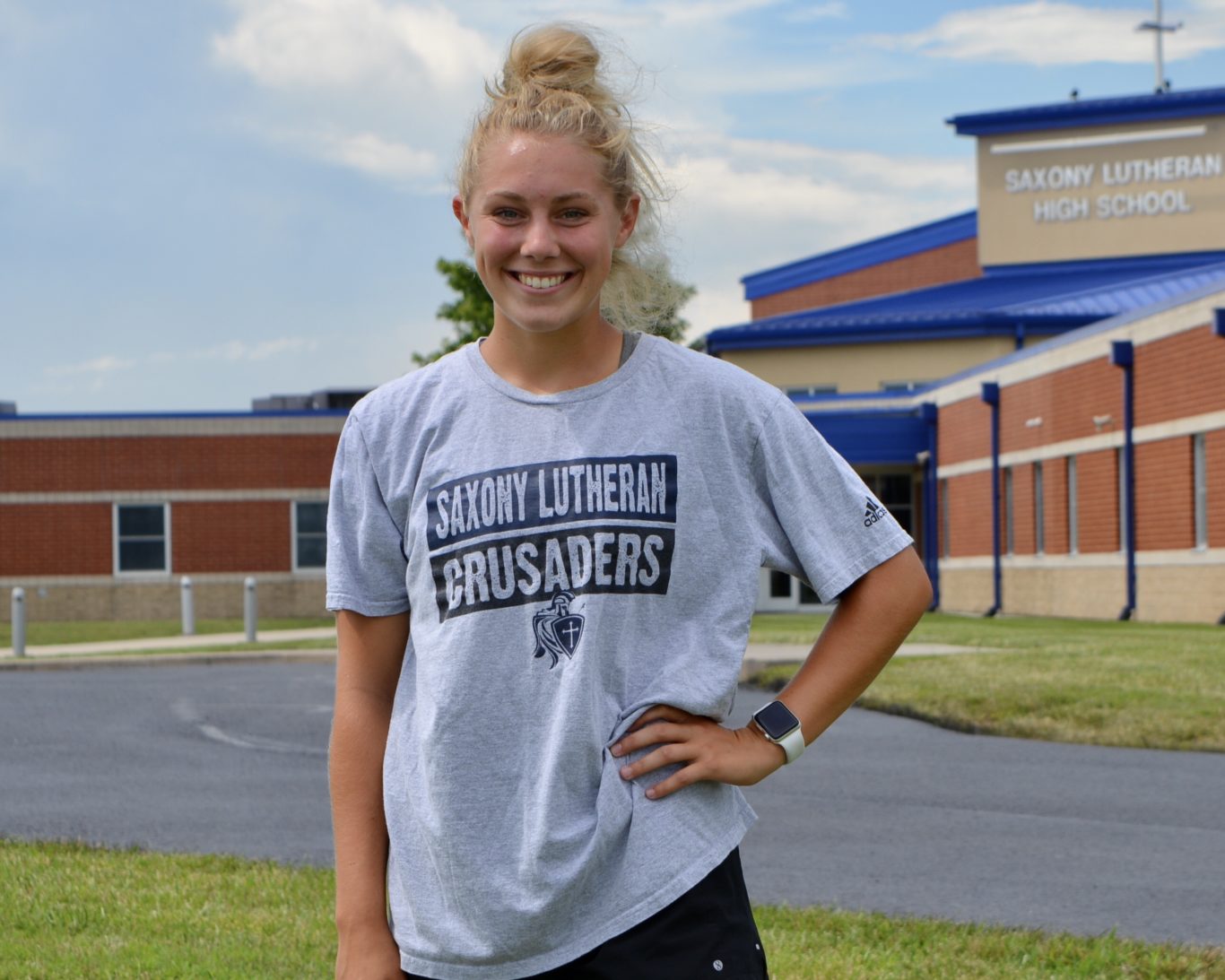 The term GOAT is an acronym sports fans use to describe players who they feel are the greatest of all time, and for the Saxony Lutheran Crusaders faithful, the GOAT happens to be 2020 graduate Emma Brune.

Brune was named one of the two 2020 CBJ Athletes of the Year and is also the first two-time female All-CBJ Team selection after cementing her GOAT status in her final seasons on the basketball court and soccer field as a Crusader.

Due to the coronavirus pandemic canceling all spring sports this year, Brune’s last full season with Saxony soccer was her junior campaign in 2019. For that year, the Crusaders went 8-11-1 and fell to eventual Class 1 state runner-ups St. Vincent 4-3 in overtime of the District 1 Championship.

“I thought I had a pretty good junior year,” Brune said. “Overall, our team improved a tremendous amount that season. Definitely was super upset that I didn’t get to play my senior year and just not knowing that was my last game was tough.”

Brune was the only player on Saxony to score a goal against St. Vincent for a hat trick in her final official high school contest. However, Brune was able to play with the Crusaders one last time on the pitch in the SEMO Conference Friendlies Tournament on June 26 at Jackson.

Saxony played twice in the tournament but Brune was only able to participate in the final match due to scheduling conflicts. Brune suited up against Poplar Bluff and, to no surprise, recorded a hat trick for a 5-0 win.

Scoring those goals and competing with her fellow seniors in a Crusaders uniform again was a gratifying experience for Brune, but her favorite part of the tournament was playing with her younger sister, Clara, who will be a freshman at Saxony this upcoming school year.

“That [tournament] was super fun — it was really good closure, but it just made me wish we could’ve had the season even more,” Brune said. “Getting to play with my sister was really fun and it was a special moment, so that was awesome. I never got to play with [my older sister] Maddie, and I never thought I’d get to play with Clara.”

Even though Brune and Saxony soccer were unable to win a district title during her three seasons, she still accomplished something that no other girls soccer player in Missouri ever has since the state adopted the sport back in 1985. Brune was named the Missouri High School Girls Soccer Coaches Association Player of the Year for a historic third time after recording 84 points (35 goals, 14 assists) her junior season.

The three-time Class 1 Player of the Year totaled 227 career points by scoring 90 goals and dishing out 47 assists, and she will be continuing her family’s tradition of playing a sport in college. Brune’s mother, Jenny, played one season of basketball at Southeast Missouri State, while Maddie played soccer the last four years at Troy.

Following her sophomore year, Brune verbally committed to play soccer at SEMO and officially became a Redhawk back when she signed with the eight-time Ohio Valley Conference Champions in November. Choosing to play soccer in college over basketball was not an easy decision for her at first, but Brune has taken her love for soccer to another level.

Anyone who has watched Brune play or simply looked at the numbers she has produced can easily tell how talented she is. What they probably do not know is just how much work she puts in to become the best soccer player she possibly can be.

While the entire sports world was put on hold and senior dreams for players like Brune were crushed, she was at Saxony’s soccer field perfecting her craft every day. Brune’s now former basketball coach and current athletic director at Saxony Sam Sides said whenever he would come to school in the morning during the closure, he would see Brune training by herself on the soccer field.

It was a hard pill for Sides to swallow when he found out Brune was going to play soccer instead of basketball in college because he stated that Emma is the best player he has ever coached throughout his 42-year, Missouri Basketball Coaches Association Hall of Fame career. Sides said if Brune, who is 5-foot-6, was taller then she could have played “big-time college basketball.”

Basketball was the only full sports season Brune was able to have as a senior, and she finished her career on the court as a two-time Class 3 All-State recipient and a four-time district champion. One could call Saxony’s girls basketball record book “The Book of Brune” since she finished her career at the top of 15 categories, including all-time career points (1,902) and steals (293).

This past winter, Saxony finished with an overall record of 18-12 and won an eighth-straight district title with Brune leading the way.

The Crusaders, who produced a record of 87-33 overall in Brune’s four years as a starter, were six points shy of reaching this year’s Class 3 Final Four by falling to Licking 52-46 in the quarterfinals. Licking ended the season as the state runner-ups after nearly upsetting the now five-time reigning Class 3 State Champions Strafford but fell 65-62 in the title game.

“I was really happy with how basketball ended. I thought our team did really well, and I thought I had a pretty good season,” Brune said. “Overall, I didn’t have any regrets. Earning all-state again was a huge honor — being all-state is huge especially for Class 3 basketball.”

Brune broke her own record of points in a single season with 654 (22.6 per game) and also set the single-season steals record by recording over 100 at 104 (3.6 per game). Even though most players are all about scoring, Brune is most proud of the records she holds defensively.

“[The steal’s records are] honestly probably my favorite records that I broke because I just really like defense,” Brune said. “I would say my quick hands and quick feet, seeing where [the ball carrier is] going to go and getting a step ahead of them is kind of how I did it.”

Another program record Brune holds is scoring the most points in a single game with 35, which she set against Freeburg in the Hillsboro Invitational semifinals. In 29 games played through 2019-20, Brune scored 20 or more points in 21 contests and also had two more 30-point performances.

“It’s just kind of a feeling [when I get on a scoring run],” Brune said. “Those games are confidence boosters for me, so helping my team out is always a good feeling.”

What Emma is going to miss the most about Saxony is playing for coaches like Sides and head soccer coach Chris Crawford. She is also going to miss making memories with her teammates through team meals and sleepovers, where they play games like “hostage.”

Countless of young female athletes, like her sister Clara, have witnessed Brune’s high school career as a five-time all-state athlete. The GOAT had this advice for them, “Never stop working. Never give up — even if you fail, just keep going.”