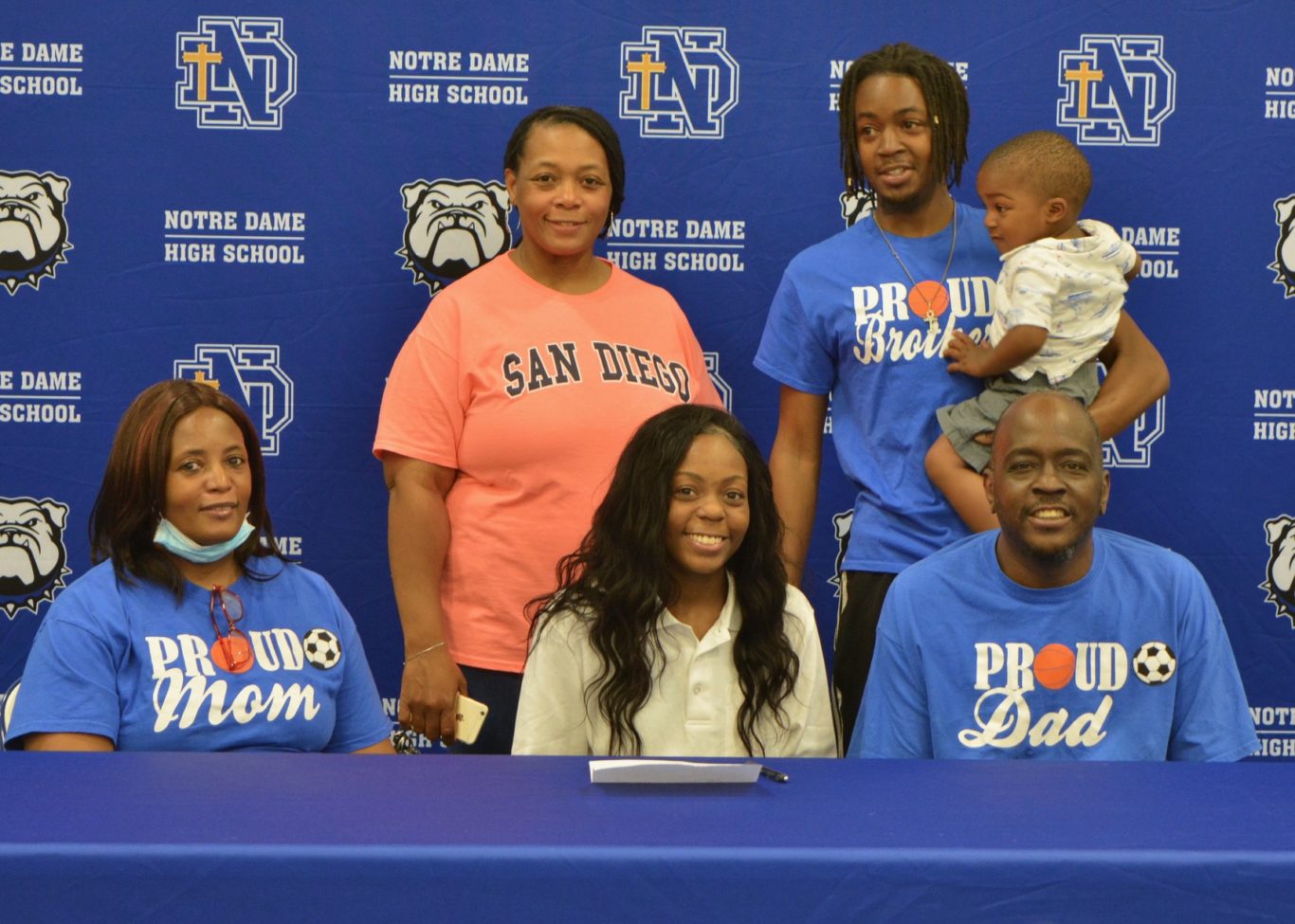 Cape Notre Dame senior Emily Kellum has played basketball and soccer ever since she was a child because she wanted to follow in her older brother’s footsteps. She will now be continuing her career in both sports at Mineral Area College.

The Bulldog signed with the Cardinals after helping Notre Dame’s girls soccer team win a Class 2 State Championship last year and helped the girls basketball team advance to the Class 4 Final Four for the first time in 10 years this season.

“I’m really excited because first of all, Dan Martin is the coach for soccer, and he [coached at Notre Dame] my freshman year, so I know him very well,” Kellum said. “And I’m excited to keep playing basketball.”

Kellum enjoys playing soccer because she is able to spend time outside and touch the ball, but she also loves the physicality of the sport as a defender, so tackling has become her forte. In her last two seasons as a member of Notre Dame’s backline, Kellum helped the Bulldogs record a combined 33 shutouts en route to two state championship appearances.

Notre Dame only suffered one loss in what would be Kellum’s final season of high school soccer as the Bulldogs went 26-1-1 overall as their lone loss was to Class 4 Oakville at 2-1. The Bulldogs outscored opponents 141-17 and ended 2019 with a 4-0 shutout of Visitation Academy in the state final.

Three other players from that year’s team went on to play college soccer: Megan Heisserer at Southeast Missouri State, Abby Wilson at William Woods and Kristen Tarno at Central Methodist.

“It’s amazing — it’s amazing [to win a state championship],” Kellum said. “I look at the state ring I have in my room, and it’s just pretty. I love it. It was something coming into high school I wanted, but actually doing it — I can’t really explain. It’s a really good feeling.”

Kellum will be able to suit up for the soccer team one last time this season in the SEMO Friendlies Tournament, where Notre Dame will face Saxony Lutheran tomorrow and Jackson Friday.

As for basketball, it is a sport that brings Kellum peace because she loves being in the gym shooting. It also lifts her spirits whenever she is upset about anything.

This winter, Notre Dame’s girls basketball team recorded one of its best seasons in program history by finishing 25-4 overall and reaching the final four. No Class 4 or 5 team was able to compete at state because those final fours were canceled due to the coronavirus pandemic.

It was still a season Kellum and the Bulldogs will never forget as they won the SEMO Conference Tournament for the first time and were also First State Community Bank Holiday Classic Champions. Kellum averaged 6.7 points, 4.0 rebounds and 1.82 steals per game in her final season.

Kellum played with the likes of fellow Bulldogs such as sophomore Lexi Rubel and senior Riley Burger, who will both be college athletes. Burger already signed with Louisville to continue her track and field career as a jumper, while Rubel fields two offers to play college basketball (SEMO and Southern Illinois).

“[My last season of basketball] was amazing,” Kellum said. “I got closer with my teammates and my coaches, and since it was my last year, we did something we haven’t done in a very long time. We didn’t get to play at state, but it was still amazing knowing we won and had the chance.”

Athletes who have played a sport in college compare it to having a full-time job instead of it just being a hobby. Kellum is excited and says she is ready for the challenge.

“My mentality is to get better in every aspect — stronger, more mature as a person and an athlete and see where it takes me,” Kellum said. “I would probably choose basketball when I go to a four year school, and it will be impossible to do both because I want to go into nursing, and that’s going to be too much.”

As Kellum mentioned earlier, she will be pursuing a career in nursing to become a nurse anesthetist while she is off the court and field. This is because Kellum knows people who are in the field personally, like her mother. “I saw the steps she had to go through in nursing school. Also, one of my close friend’s dad is a nurse anesthetist, and everything he tells me about it I really enjoy and can see myself doing that.”